Imam-ul-Haq finished the 5-match ODI series against Zimbabwe with a 105-ball 110 in the final ODI.

Imam-ul-Haq has always been under scanner as many feel his uncle Inzamam-ul-Haq, Pakistan’s chief selector plays a key role in his nephew’s selection. However, the left-hander has continuously hit back at his critics and has already scored four centuries in the nine ODI matches. Imam finished the 5-match ODI series against Zimbabwe with a 105-ball 110, his 3rd century of the series. He has been amongst hundreds ever since his ODI debut last year against Sri Lanka.

Imam scored exactly 100 runs on his debut becoming only the 2nd Pakistan player and overall the 13th to score a hundred on ODI debut. He returned to the ODI team for the 5-match ODI series against Zimbabwe with a 128-run knock in the first ODI. Thus, he became the first Pakistan player to hit two centuries in first five ODIs. His uncle, Inzamam scored his 2nd ODI ton in his 6th innings and 7th match in this format.

Imam scored 113 off 122 balls on the course of a record triple century stand with Fakhar Zaman in the 4th ODI. Thus, the 22-year-old became the quickest to hit three centuries in this format taking only eight innings. England’s Dennis Amiss and Kevin Pietersen took nine innings apiece for scoring their 3rd century in ODI cricket. The 110 in the final ODI game meant Imam became the fastest to score four centuries in the ODI cricket as he became the first to score four tons in career’s first ten ODIs.

Imam needed only nine innings for his 4th ODI century, seven innings lesser than the previous fastest Quinton de Kock (16).  The South African held the record by scoring three consecutive tons during the 2013 home series against India. Dennis Amiss scored his 4th century in the 18th match of his ODI career, which was also his last. Pakistan’s Babar Azam needed 23 innings for his 4th ODI ton. Interestingly, Babar became the 2nd quickest to eight ODI hundreds during the 5th ODI with his unbeaten 106. 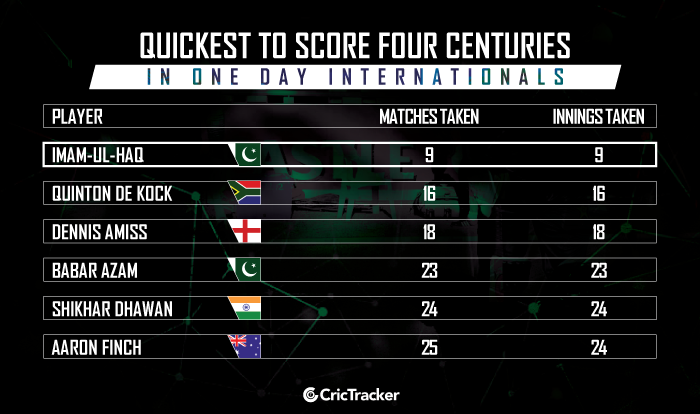