Babar Azam hardly got to bat during the 5-match ODI series against Zimbabwe.

Babar Azam hardly needed time to step his authority in the limited-overs cricket and the become Pakistan’s current best batsman in ODI and T20I formats. In less than two years since his debut, Azam owned the crucial No.3 position with consistent scores and by creating records. However, in the 5-match ODI series against Zimbabwe, Pakistan’s most reliable batsman hardly batted throughout the series due to openers Fakhar Zaman and Imam-ul-Haq‘s big partnerships.

Fakhar, in this, process, became the fastest player in the history of ODI cricket to score 1000 runs. He needed only 18 innings bettering the previous record held by five players in 21 innings. Babar is one of the five players who completed 1000 ODI runs in only 21 innings. In the final ODI, Babar scored an unbeaten 106 in just 76 balls with nine fours and two sixes to help Pakistan finish on 364/4. Azam’s 72-ball century in this game is the quickest among his eight ODI tons.

Azam now has 1973 runs to his name in the ODI format post his unbeaten 106. Had Babar scored 27 more runs in this innings, he could have become the 2nd fastest to the milestone after Hashim Amla (40) by taking only 44 innings. However, by scoring 8th ODI hundred in 44th innings, Babar Azam became the 2nd fastest to eight centuries in this format. Hashim Amla (43) needed one innings lesser than Azam when his 8th century in this format.

Babar Azam has found himself in fastest to ‘n’ centuries in ODI cricket lists as he scored his 4th, 5th, 6th and 7th centuries in this format in 23, 25, 32 and 33 innings respectively. He was the quickest to seven ODI tons by breaking Hashim Amla’s record as the South African scored his 7th ODI ton in his 41st innings. Babar is also the 2nd fastest to score 5th and 6th ODI hundreds and is now the 4th fastest to four centuries in ODIs. 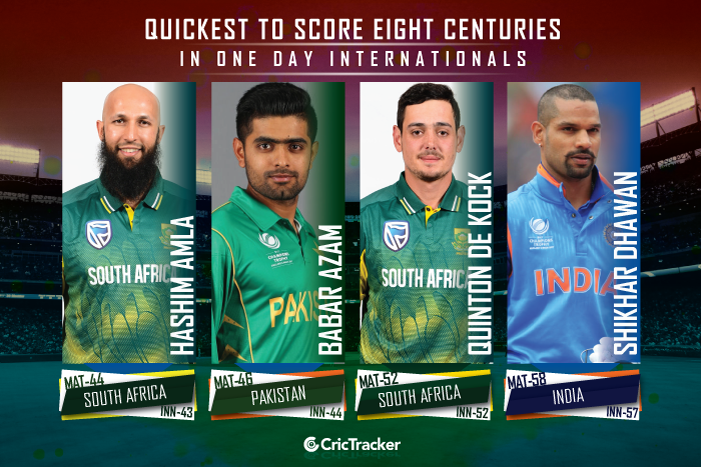