Aiden Markram had an interesting start to his International career as the 23-year-old consistently scored runs in the Test format and also became the captain of South Africa‘s ODI team in the absence of Faf du Plessis. The youngster led South Africa to the Under-19 World Cup title in the 2014 edition and is considered as the future captain of the senior side. The opener aggregated 480 runs in the 4-match Test series against Australia as South Africa set towards their first home Test series victory against the Aussies since their readmission.

Markram started his Test career with a 97 on debut against Bangladesh before getting run out before scoring 143 in his 2nd Test and a 125 in the following game against Zimbabwe. He had a quiet series against India where the bowlers had the domination but stood out strong against the Aussies with a 143-run knock during the huge chase in the Durban Test. He scored his maiden 150+ in Test cricket in the first innings of the ongoing Johannesburg Test. In the 2nd innings, Markram scored 37 before edging one into the slips off Pat Cummins.

Markram completed 1000 runs in the Test cricket when he reached 37 in the 2nd innings against Australia. He reached the milestone in his 10th Test and after batting 18 innings. Thus, he became the 2nd fastest in terms of innings for completing 1000 Test runs for South Africa. The former captain Graeme Smith needed 17 innings for completing 1000 runs in this format. Markram is the quickest to 1000 Test runs for South Africa in terms of matches surpassing Eddie Barlow (11 Test matches).

Fastest to 1000 runs in Test cricket for South Africa: (In terms of innings) 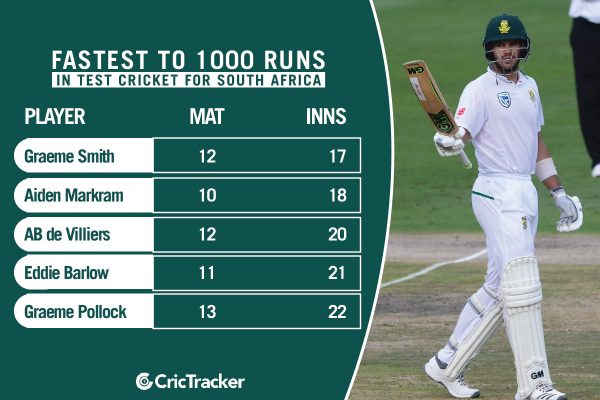 Markram also became only the 2nd player after Mike Hussey to score 1000 runs in maiden Test season. The Australian scored 1139 runs in 2005/06 season in which he made his Test debut. Markram reached this milestone in 186 days from his debut which are the 2nd fewest after Hussey. The former Australian left-hander reached 1000 Test runs in only 166 days. No player other than Markram and Hussey needed less than 200 days from their debut for completing 1000 Test runs.

Fastest to 1000 runs in Test cricket from debut: (In terms of days) 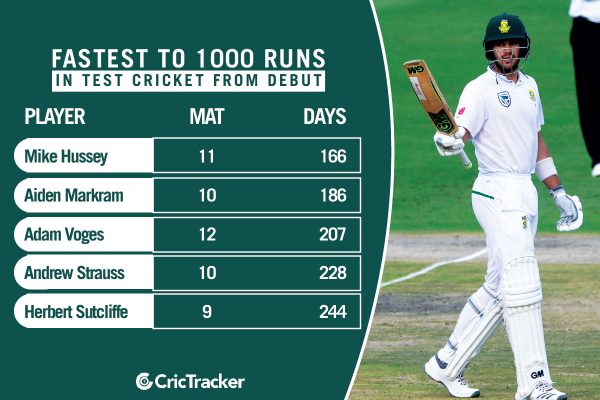