Rishabh Pant spent 46 minutes at the crease, faced 29 balls before bagging a duck.

Rishabh Pant had a dream start to his Test career as he opened his account with a six in the longer format and claimed as many as five catches in his first innings behind the stumps for India. He broke the Indian record for most dismissals on Test debut by claiming two more in his debut in Nottingham that they won by a huge margin. However, things didn’t go as smooth for the young keeper-batsman in the ongoing Test in Southampton at least on the scoreboard.

Rishabh Pant conceded as many as 23 byes on the first day of the game and was on the end of unfair criticism as most of the byes he failed to stop would have been equally difficult to stop for anyone else in the world. On the 2nd day, the 20-year-old walked to the crease at No.6 and batted himself in a shell. It seemed as if he was batting to survive until the Tea break as he didn’t show any intentions to score. He spent 46 minutes at the crease facing 29 balls before bagging a duck at the stroke of Tea.

Most balls faced for a duck in Test cricket for India: (Where Recorded) 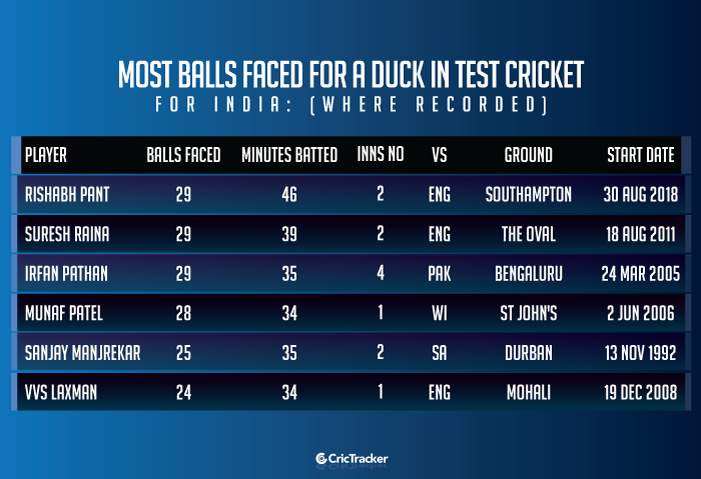 Thus, Rishabh Pant equalled the record for most balls faced before bagging a duck for India in Test cricket. (Where balls faced data is available) All-rounder Irfan Pathan in the 2005 Bangalore Test against Pakistan and Suresh Raina in the 2011 Test also against England at The Oval bagged 29-ball ducks. Interestingly, all the three Indian players to have got a 29-ball ducks are left-handers. Munaf Patel came close to the record when he recorded a 28-ball duck in Windies tour a year after Irfan.

Pant was at the crease for 46 minutes on his way to a duck which is the longest an Indian batted without scoring in Test cricket. Ashish Nehra batted 44 minutes for an 18-ball duck in the 2002 tour of West Indies. Earlier in the December last year, Dinesh Karthik bagged an 18-ball duck in the ODI against Sri Lanka to attain the record for facing most balls and getting a duck among Indians in the 50-over format. In the same game, Jasprit Bumrah batted 38 minutes before bagging a duck which was also an Indian record in the ODI cricket.

Most minutes batted for a duck in Test cricket for India: (Where Recorded) 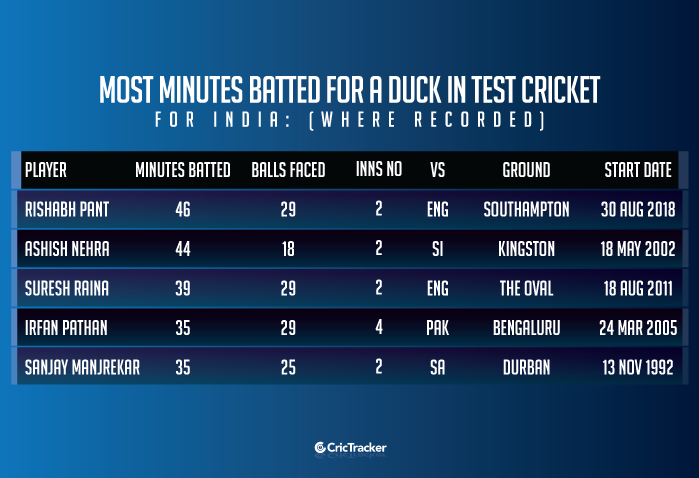