Shahbaz Nadeem was brought in as the second change in the 10th over by which Rajasthan had reached 32/0.

Shahbaz Nadeem, the evergreen performer in the Indian domestic circuit, came up with a record-breaking performance on Thursday in the ongoing Vijay Hazare trophy. Jharkhand faced Rajasthan in the Group C game and he was on fire from the word go. Nadeem, fresh from bowling in the nets for India in Dubai, ran through the opposition line-up at the Murugappa Ground in Chennai. His magical bowling figures read 10-4-10-8 as a result, Rajasthan were bowled out for just 73 runs.

Nadeem was brought in as the second change in the 10th over by which Rajasthan made 32/0. He dismissed both the openers in his first three overs and the real destruction was recorded between 18th and 24th over. In the space of 27 deliveries, Nadeem claimed as many as six wickets to reduce the hapless opponents to 66/8.

He was all set to claim a perfect ten after picking eight wickets in eight overs but Anukul Roy dismissed Rahul Chahar to shelve his dreams. The same bowler scalped the final wicket as well after Nadeem went wicketless in his final two overs and missed out on becoming the first player to take a nine-wicket haul in List A cricket.

Who are the others?

Nadeem, in this process, registered the best bowling figures in List A cricket. He bettered the record held by Rahul Sanghvi, another left-arm spinner from India. Sanghvi took 8/15 while playing for Delhi in the 1997 Ranji One-Day game against Himachal Pradesh. He picked the last seven wickets to fall in the Himachal’s innings. The first wicket was taken by Amit Bhandari while the third wicket fell via run out. Sanghvi had opened his account with the second wicket of the innings before running through the home team’s batting.

Chaminda Vaas’ 8/19 in an ODI against Zimbabwe stands at the 3rd position in the best bowling analysis in List A cricket. The left-arm pacer took eight wickets in his first eight overs and was on the course of a ten-wicket haul with his partner Nuwan Zoysa going wicketless in his seven overs. A bowling change was made from the end Zoysa bowled which cost the left-arm pacer the elusive record. Muttiah Muralitharan took two wickets in the four balls to rattle Zimbabwe to just 38 runs. However, Vaas remains as the only bowler to take eight wickets in an ODI game. 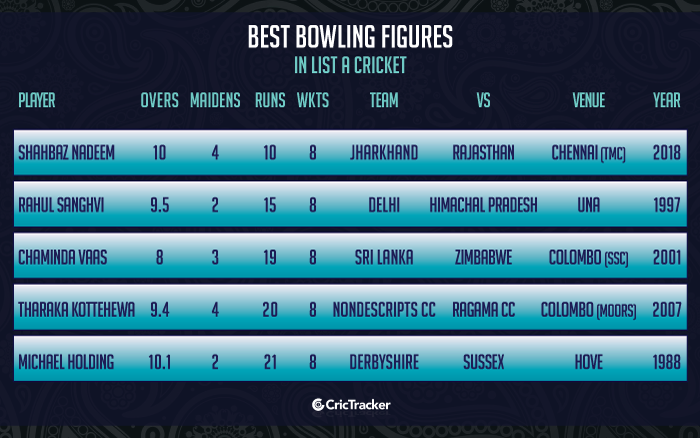