Stats: Shortest completed matches in the history of ODI cricket

Stats: Shortest completed matches in the history of ODI cricket

Pakistan wrapped up the chase against Zimbabwe in just 9.5 overs.

Pakistan recorded their 50th ODI win over Zimbabwe by defeating them in the 3rd game of the 5-match ODI series. It was a huge 9-wicket win that ensured the Men in Green seal the series with two games still to be played. Pakistan thumped the hosts without breaking a sweat in the third match as they bundled out Zimbabwe for just 67 runs after losing the toss. In response, Pakistan lost the wicket of Imam-ul-Haq on the very first ball but cruised to the target in 9.5 overs.

Thus, Pakistan registered their biggest win in terms of balls remaining chasing the target with 241 balls to spare which is also the 10th biggest win for any team in ODI cricket. The game which was supposed to be played for 100 overs, completed with just 35 overs of play. Zimbabwe innings lasted 25.1 overs with the longest partnership coming for the 9th wicket which lasted 7.1 overs. The 210 balls bowled in this game are the 9th fewest in a completed ODI game (excluding reduced matches).

The 2001 Colombo ODI between Sri Lanka and Zimbabwe lasted only 120 balls (20 overs) as Zimbabwe were bowled out for just 38 runs. Chaminda Vaas recorded the best bowling figures in ODI cricket with his 8/19 to skittle out Zimbabwe in just 15.4 overs. The home team chase down the 39-run target in only 4.2 overs for the loss of one wicket. This Zimbabwe-Pakistan ODI is also the shortest completed match since the start of 2014.

As many as eight ODI matches were completed in less than 200 deliveries with the last one in 2013. The ODI between Australia and Windies was the last such example as the Caribbean side was blown away by the home team’s pace attack at the WACA Stadium in Perth. Windies were bowled out for 70 runs batting only 23.5 overs and the Aussies did not waste any time and chased the target in only 9.2 overs. The makeshift opener Glenn Maxwell scored an unbeaten 35-ball 51 leading his side to a win.

Shortest completed matches in the history of ODI cricket: 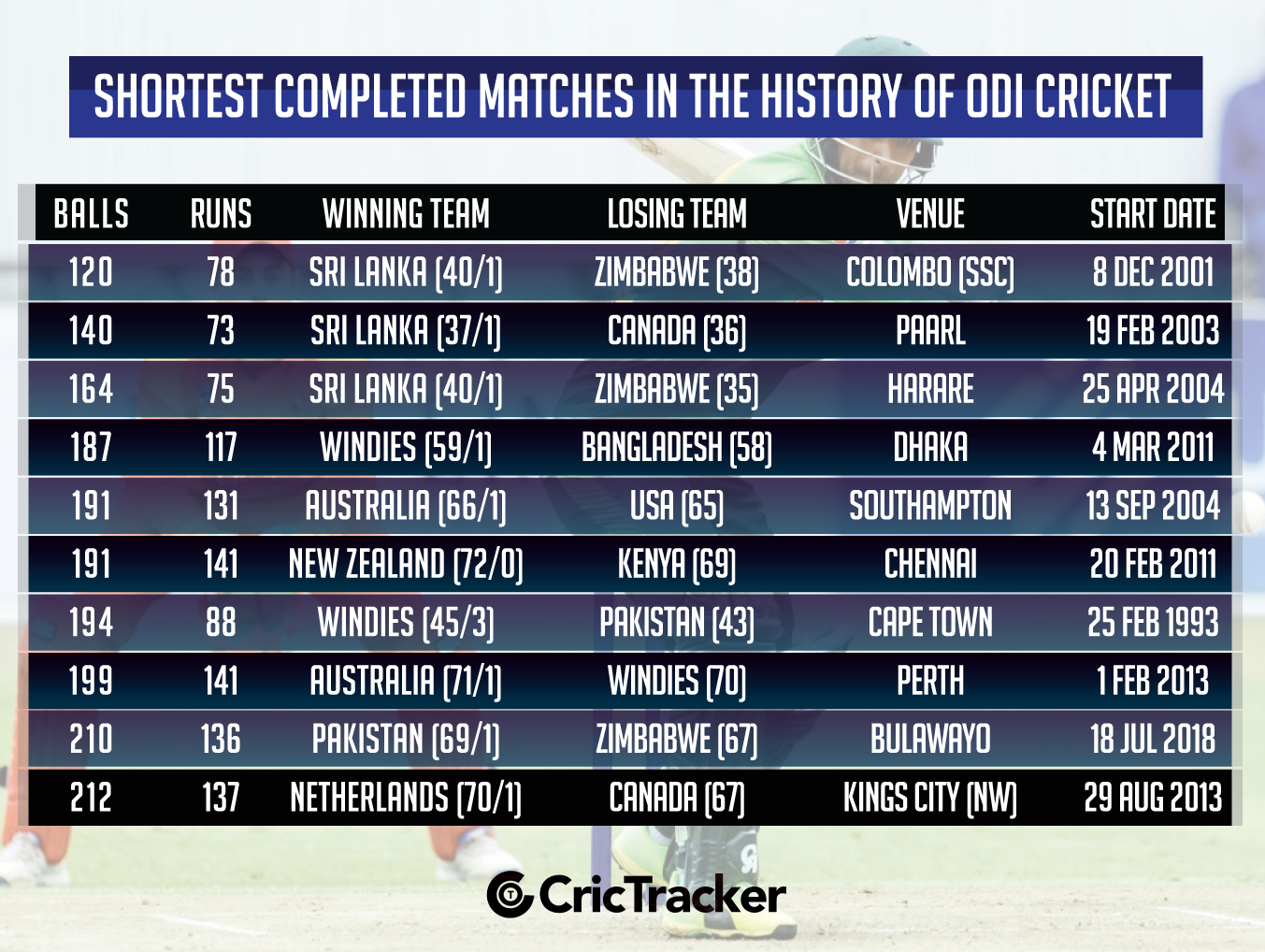