All the stats and numbers recorded during the high-scoring match in Kingston.

The defending champions Trinbago Knight Riders cruised to their 4th consecutive win of the tournament with a 41-run win against the Jamaica Tallawahs. Contrastingly, this was the 4th successive defeat for the Tallawahs. Their bowling was once again demolished as the Knight Riders finished with 267/2 with Colin Munro (96* off 50) and Lendl Simmons (86* off 42) making key contributions. Glenn Phillips started off the chase with a 32-ball 62 but lack of batting depth costed the Jamaican franchise who settled with 226/5.

All the stats and numbers recorded during the high-scoring match in Kingston:

0 – Number of team totals in excess of 230 in the history of Caribbean Premier League prior to this season. The Jamaica Tallawahs made 241/4 while the SKN Patriots finished on 242/6 in the reply during the Match 7 of this season at the Warner Park. The Trinbago Knight Riders finished with 267/2 on Friday night.

267/2 – Trinbago Knight Riders’ total of 267/2 is the highest in franchise Twenty20 cricket surpassing Royal Challengers Bangalore’s 263/5 against Pune Warriors India in the 2013 IPL. Overall, TKR’s total is the 3rd highest score in Twenty20 format. Afghanistan made 278/3 against Ireland while the Czech Republic also posted 278/4 against Turkey; both in 2019 only.

35 – Number of sixes hit by both the teams in this match; the 2nd most in any T20 match. The game between SKN Patriots and Jamaica Tallawahs in Basseterre earlier this week and the last year’s APL T20 match between Balkh Legends and Kabul Zwanan witnessed as many as 37 maximums. 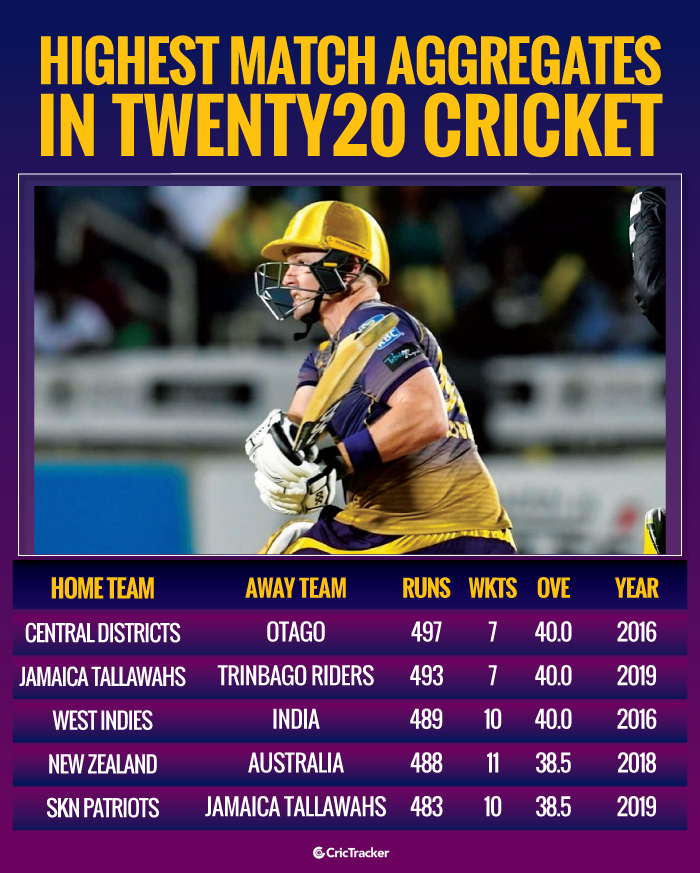