Virat Kohli holds the record for being the fastest to complete 15000 runs, 16000 runs and 17000 runs in International cricket.

Virat Kohli’s has bat continued to dictate terms irrespective of his team’s performance on the field as he has already scored more than 550 runs in the ongoing five-match Test series against England. Though India trail the series 1-3, Kohli has amassed over 200 runs more than the next highest run-getter. Coming into the final Test at The Oval, Kohli has already scored two centuries and three fifties. He surpassed his tally from the previous Test tour in the first innings of this series and set the tone for what was to come.

The Indian skipper walked out to bat on the 2nd day of the final Test when the score was 70/2 and quickly got going with a couple of boundaries. With a single off Stuart Broad in the 34th over, Kohli reached 21 and completed 18000 International runs. Thus, Kohli became the fastest to complete 18000 runs in International cricket among the 15 players to achieve this milestone in terms of innings. Last 1000 runs for Kohli have come in 19 innings despite him batting at No.4 in the T20I games this year.

The previous fastest to this milestone was Brian Lara in 411 innings. The West Indian completed 18000 International runs during his record-breaking unbeaten 400 in 2004. Lara came into the game needing 210 runs for the milestone and his marathon record helped him to edge past Sachin Tendulkar who needed 412 innings for the same. Steve Waugh (539) and Sanath Jayasuriya (537) are the only players to have taken more than 500 innings among the 15 players to score 18000 International runs.

Kohli holds the record for being the fastest to complete 15000 runs, 16000 runs and 17000 runs in International cricket as well. The Indian skipper needed 333 innings for 15000 while 350 and 363 innings respectively for 16000 and 17000 runs. He got the better off Hashim Amla on his way to those three milestones. However, Amla has slowed down recently but still has a chance to find a place behind Kohli, Lara and Sachin among the fastest to complete 18000 International runs. 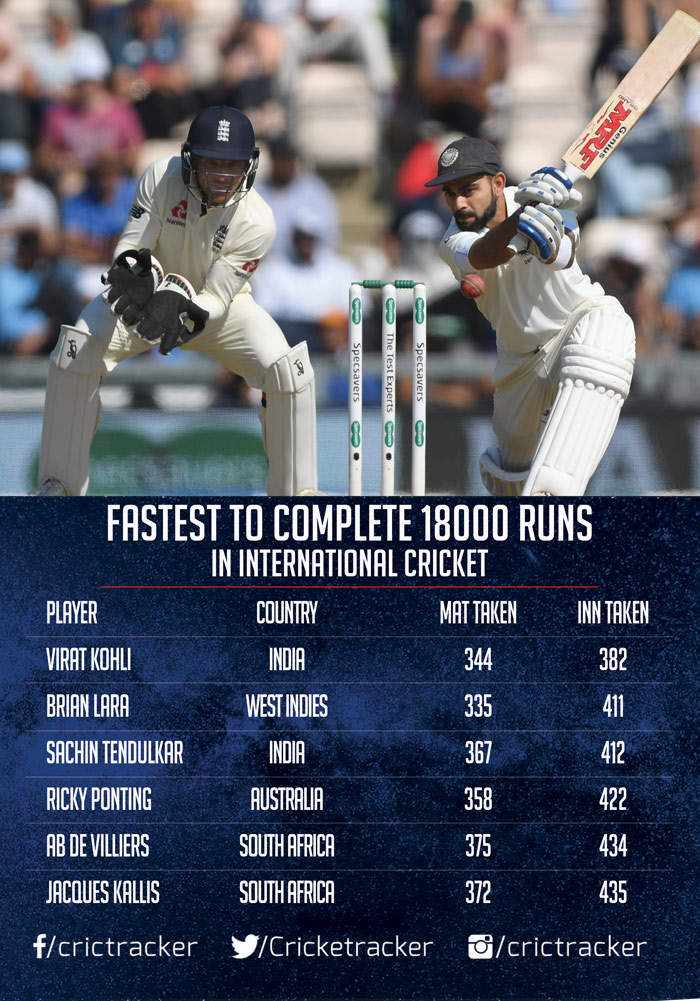