Arzan Nagwaswalla had figures of 4-1-11-3 on his Twenty20 debut against Tamil Nadu.

Gujarat have witnessed the highs and lows of the Twenty20 format during the ongoing Syed Mushtaq Ali T20 tournament. They won three of the four matches they played thus far in Surat that includes a 13-run win against Meghalaya and a huge 70-run victory over Himachal Pradesh. Gujarat won the Super Over against Rajasthan by virtue of scoring more boundaries as both the teams scored only four runs in the one over eliminator.

Gujarat were all set to win the game inside 20 overs before it ended in a Tie as they scored only four runs from the last eight balls when they needed five. In the previous game against Tamil Nadu, the hosts went down by a 1-run margin. Chirag Gandhi’s unbeaten fifty kept them in the hunt despite losing nine wickets for 96 while chasing 126. When Gujarat needed three to win on the final ball, the non-striker tried to sneak byes without realizing it was wide.

The Syed Mushtaq Ali T20 Trophy 2018-19 match between Gujarat and Bihar will be played at the Lalabhai Contractor Stadium in Surat.

The Lalabhai Stadium is probably the venue has the lowest scoring rate after four days of the tournament. Teams can have a hope of winning even after scoring around 130 at this venue.

Parthiv Patel hasn’t featured in any game this season due to his father’s health.

Arzan Nagwaswalla has impressed with the ball in his debut season. The left-arm pacer bagged 21 wickets in Ranji Trophy that includes a 5-wicket haul coming against Mumbai. He picked up 3/11 on his Twenty20 debut against Tamil Nadu which includes wickets of Murali Vijay and Ravichandran Ashwin.

Axar Patel and Piyush Chawla are perfect as captain or vice-captain. 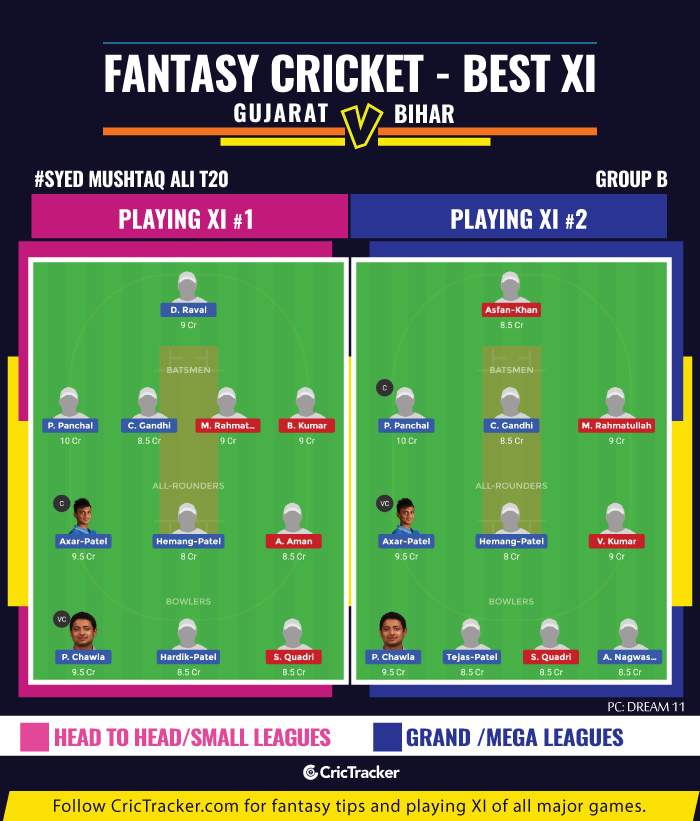 Bihar batsmen haven’t been amongst big runs in this tournament. So filling the fantasy team with Gujarat bowlers won’t be a bad idea if Bihar bats first.

Gujarat is expected to register their 4th win of the tournament by handing 4th defeat to Bihar.