It will be a battle between two batting powerhouses.

The first round of the ongoing T10 League in Sharjah is concluded and the teams will now be fighting it out in the second round. A different format greets the fans this time and the first match of the round will be played between Pakhtoons and Bengal Tigers. Both the teams won their previous games and would be keen on continuing with the same momentum given a lot will be at stake now.

Pakhtoons surprisingly topped Group A as many didn’t give them a chance after losing badly to Kerala Knights in their first game. Andre Fletcher‘s Caribbean power has worked wonders for them so far and he remains key for them. His 68-run knock against the Sindhis helped them post 137 in 10 overs. But the form of the other batsmen could be a worry for them going deep into the tournament.

As far as the Bengal Tigers is concerned, Jason Roy, like Fletcher, has been the go-to man for them. With the top-order doing the bulk of the scoring, it is important for him to be consistent. He attacked from the word go against the Punjabi Legends and won the game for his team. Even the bowling attack of the Tigers is superb and have the ability to dismantle any opposition on the day.

There is a forecast of rain in Sharjah on Monday but things dramatically change in the evening. While it will be cloudy during the game, there is no chance of rain according to Accu weather which means that we will get a full game. The pitch will surely be good for batting and expect a lot of runs on offer.

Cameron Delport and Andre Fletcher will have to continue giving the team a good start. Shafiqullah Shafaq is also in  good form and has scored the bulk of runs along with Fletcher. The likes of Colin Ingram and Liam Dawson who are the fierce hitters of the cricket ball follow then. Though their bowling attack is a little bit worrisome. Shahid Afridi does a good job more often than not and the other bowlers will have to take a cue from him.

Sharafuddin Ashraf and David Willey have been on the expensive side a bit. However, Sohail Khan is the best fast bowler so far for them and should be the man to watch out for in this game.

Jason Roy is in great form and he will be accompanied by Sunil Narine who has struggled to connect in this tournament so far. Luke Wright could be promoted to open as he is looking in good nick and his association with Roy could be devastating for the opposition bowlers. The middle-order is also strong for the Tigers as the likes of Sherfane Rutherford, Sam Billings and Mohammad Nabi.

In the bowling department, there is seldom any respite for the batsmen. Mujeeb Ur Rahman, Aamer Yamin, Morne Morkel form one of the best bowling attacks in the competition.

The prediction is for the Bengal Tigers to overpower the Pakhtoons easily. 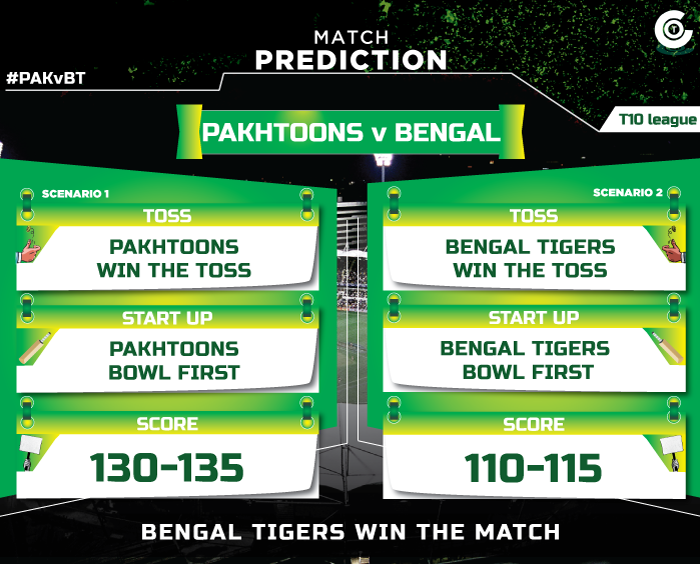 Get the latest Cricket News and updates from T10 League, Match Predictions, Fantasy Cricket Tips and lots more on CricTracker.com.