Tom Helm shouldn't be a bad shout as a budget pick

The 3rd Place Play-off of the Abu Dhabi T10 League 2021 season will be played between Qalandars and Team Abu Dhabi on 6th February, at the Sheikh Zayed Stadium in Abu Dhabi.

This match will start at 06:45 PM IST (05:15 PM local time). It will be live on Sony Sports Network and live streaming is available on Sony LIV.

Qalandars and Team Abu Dhabi will lock horns with each other in the 3rd Place Play-off of the Abu Dhabi T10 League, 2021. Qalandars will be very disappointed with themself. They played brilliantly in the league stage, having won 5 out of 6 matches they played they finish at the 3rd spot on the points table. However, a defeat against the Team Abu Dhabi in the Eliminator 1 has curbed their hopes of getting their hands on the trophy.

On the other hand, Team Abu Dhabi lost their Eliminator 2 tuie against Northern Warriors by 7 wickets. Before this game, they had won three consecutive matches. However, things didn’t go their way against the Warriors. Both teams will be up against each other to fight for 3rd place in the penultimate match of what has been an enthralling Abu Dhabi T10 League season.

Skies will be all clear in Abu Dhabi on Saturday. It will be a perfect environment for the last day of the tournament. The temperature will be around 23-24 Degree Celsius during the match time. The humidity will be around 60%.

The track at Sheikh Zayed Stadium is getting slower each day, as we have seen in last some matches, the average first-innings scores have come down. The bowlers are bowling tight lines and length. The team winning the toss will look to chase at this venue.

Paul Stirling is currently the leading run-scorer of Team Abu Dhabi. He has scored 183 runs and has a strike rate of over 220.

While Stirling has been the leader of Abu Dhabi’s batting unit, Jamie Overton has led their bowling lineup. He has picked up 11 wickets and has an impressive average of just over 15.

Sohail Akhtar might as well expect a call for the Pakistani selectors, given his splendid performances in this competition. He has scored 231 runs and has a strike rate of nearly 200.

Chris Jordan has been brilliant with the ball for the Qalandars. He has picked up 7 wickets and has an economy rate of slightly over 8 runs per over, which is extremely rare in this format of the game.

Joe Clarke has had a good season with the bat for Team Abu Dhabi. He has scored 177 runs at an average of almost 30 and a strike rate of nearly 200.

‘On his day’ is a phrase we use often when talking about Chris Gayle, but it is indeed very true that the Universe Boss can become unstoppable when he is in the mood. This makes him an automatic top-pick. He has scored 127 runs at a strike rate of over 210. 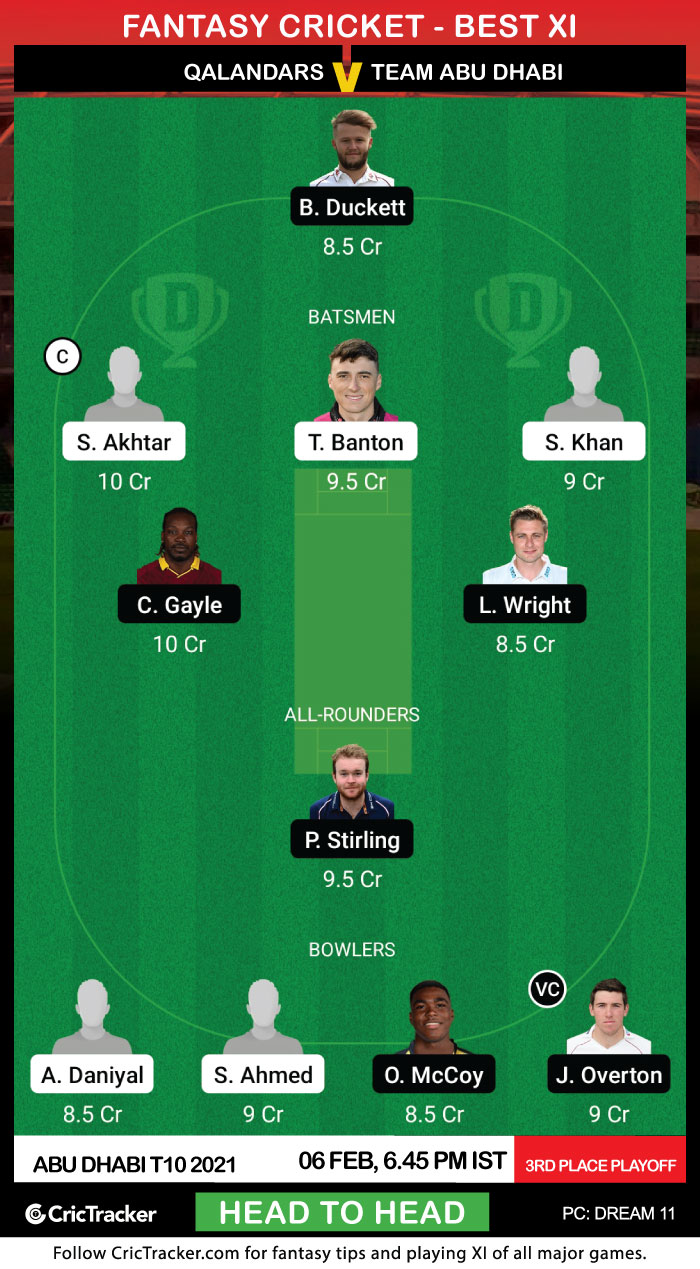 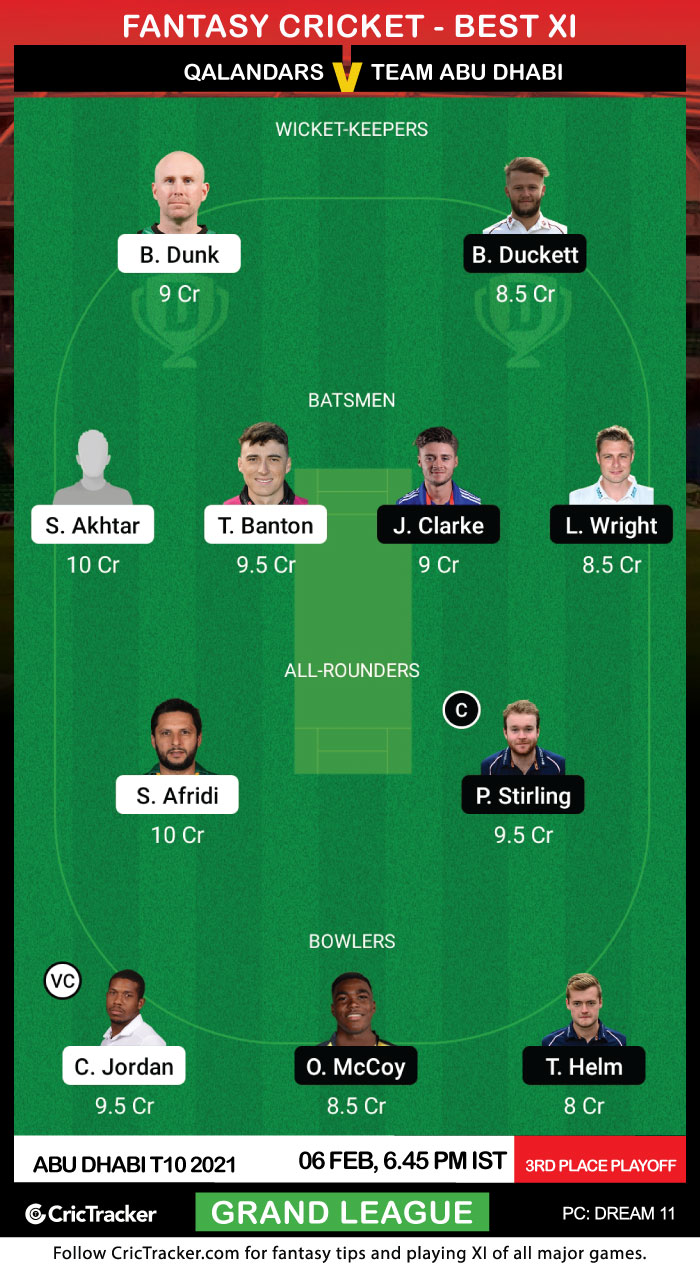 Tom Helm shouldn’t be a bad shout as a budget pick, given how he bowled yesterday. Overall, he has scalped 3 wickets and has an economy rate of under 12 runs per over.

Team Abu Dhabi are expected to win this match.