The Proteas will be going into the game after wins against Afghanistan and Pakistan in the warm-ups.

Australia and South Africa are set to lock horns in Match No.13 of the T20 World Cup on Saturday, October 23 at the Sheikh Zayed Stadium in Abu Dhabi. The Aussies, led by Aaron Finch, have had a tough time of late. They lost eight out of their last 10 T20Is on their tours of West Indies and Bangladesh.

Moreover, they lost to India by eight wickets in the warm-ups. The Proteas, on the other hand, should be fairly high on confidence. Prior to the World Cup, Temba Bavuma and Co. beat Ireland, West India and Sri Lanka in bilateral series. The Proteas also won their warm-up games against Afghanistan and Pakistan.

The pitch in Abu Dhabi has mostly helped the batting teams going by numbers in the 2021 IPL. However, the spinners also got quite a bit of assistance. Chasing should be the way forward on the surface.

Quinton de Kock isn’t in the best of form of late. He was dropped from the eleven in the Mumbai Indians after a few poor shows. In the two warm-up games, the southpaw failed to get into double digits. But the left-handed De Kock was in excellent touch when the Proteas locked horns with Ireland and the Caribbean team.

Tabraiz Shamsi is currently the ICC’s No.1 ranked bowler in T20Is. In the last 12 months, the tweaker has grown leaps and bounds. He bowled exceptionally in the series against the West Indies and Ireland. Apart from picking up wickets, he also made sure of keeping a check on the run-scoring. The Aussie batters need to play him with caution. 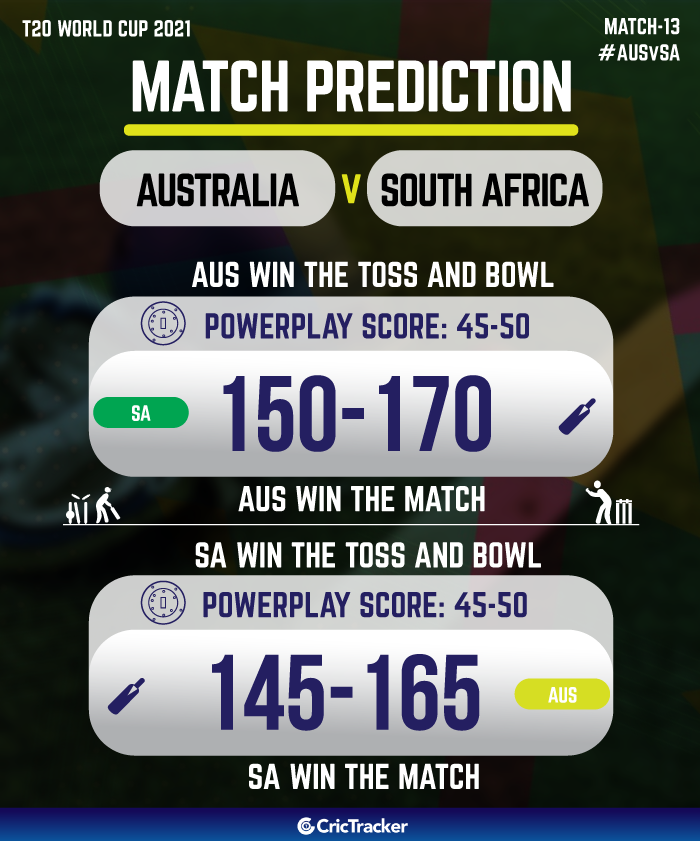