Both teams will be coming into this game after back-to-back defeats.

Birmingham Phoenix and Oval Invincibles are all set to lock horns in Match No.18 of the Women’s Hundred on Wednesday, August 4. The Invincibles started their campaign with a victory over Manchester Originals and then went on to defeat the London Spirit by a margin of 15 runs.

However, in their last two games, they failed to chase down targets despite their bowlers restricting the opponents to modest scores. The Phoenix, on the other hand, are on a two-match losing streak. But since the Invincibles are in the best of forms, the Phoenix will fancy their chances against them.

The pitch in Birmingham is expected to be a fairly good one for batting. But batting first should be the way forward as a score above the 130-run mark may not be easy to track down. Another close game seems to be in store on Wednesday.

Avg first innings score: 137 (2 matches in the Hundred at Lord’s)

Amy Jones is one of the two Phoenix batters to have breached the 100-run mark in the tournament. At the present point in time, she remains the leading run-scorer for her team in the Women’s Hundred. In four games, she has managed 107 runs at an average of 35.66 and a strike rate of 164.61. She also has the highest score of 42 in the event.

Kirstie Gordon has well for the Phoenix in the ongoing edition of the Hundred. In four matches, the left-arm spinner has picked up five wickets. Her economy rate of 1.14 suggests that she has been able to keep the opposition batters in check. Gordon is also the only bowler for the Phoenix to have bowled a maiden over in the Women’s Hundred. 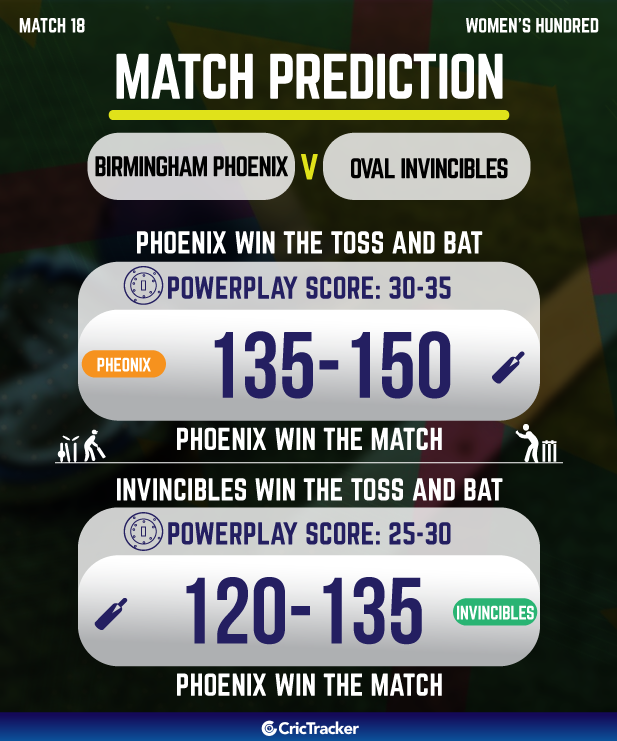