The Numbers Game: Is Eoin Morgan the greatest willow-wielder for England in limited-overs cricket?

The Numbers Game: Is Eoin Morgan the greatest willow-wielder for England in limited-overs cricket?

As far as T20 cricket is concerned, there is no England batsman who can rival Morgan.

He is a man who can change the course of a match in a matter of minutes. His hand-eye coordination is impeccable, and his ability to send the ball soaring over the boundary makes him such a dangerous batsman to bowl to.

Eoin Morgan has emerged as a vital cog of the England batting line up, and his exploits with the willow places him in the league of the greatest batsmen to have played for England in coloured clothing.

But then, can Morgan qualify as the greatest limited-overs batsman ever for England?

As far as T20 cricket is concerned, there is no England batsman who can rival Morgan. In this table below, let us take a look at the top five highest run scorers for England in T20I cricket. 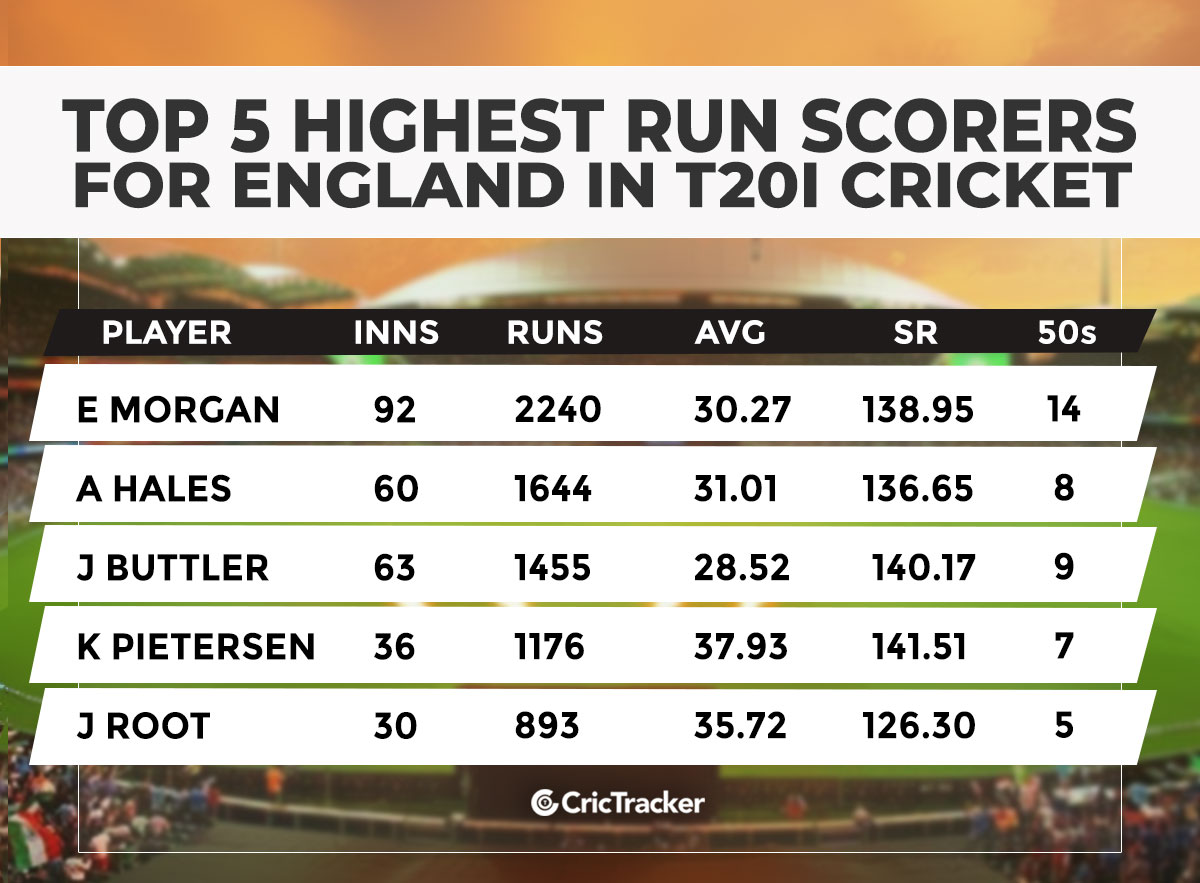 Morgan is the only England batsman who has scored over 2000 runs in T20I cricket. The England skipper also holds the record for scoring the most number of half-centuries in the shortest format of the game for the English outfit. His strike rate is close to 140, and he leads his closest competitor (Hales) by 596 runs.

The left-hander is also the only England batsman to have scored over 100 sixes (111) in the format and is a behemoth in T20 cricket.

In the pantheon of greats in ODI cricket

Even in ODI cricket, the Irish born batsman has a stellar record. In the table below, let us have a look at the top 5 highest run scorers for England in ODI cricket. 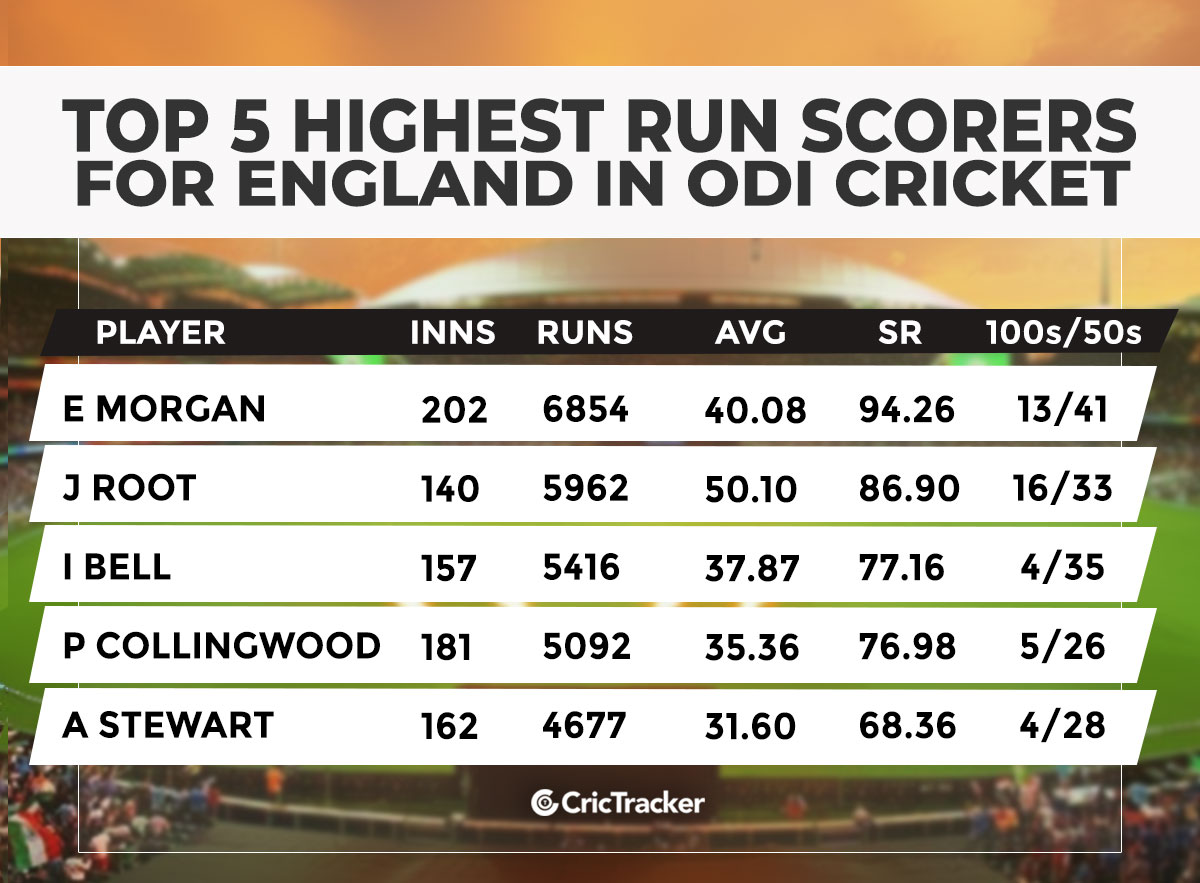 Note: Morgan has also played for Ireland, and has scored 7598 ODI runs. Only the runs scored by Morgan for England have been taken into consideration here

Morgan is the only England batsman to have scored over 6000 runs in ODI cricket. He is the second-highest century-maker for England behind Joe Root and has scored the most number of fifties for the English side as well. Amongst the 5 batsmen, Morgan is the only batsman who has a strike rate of over 90 as well. In fact, if there is one man who can rival Morgan in ODI cricket for England, it has to be Joe Root.

Performances in a winning cause in ODI’s

Now, in the table below, let us have a look at the performances of the Top 5 run-scorers for England in a winning cause in ODI cricket. 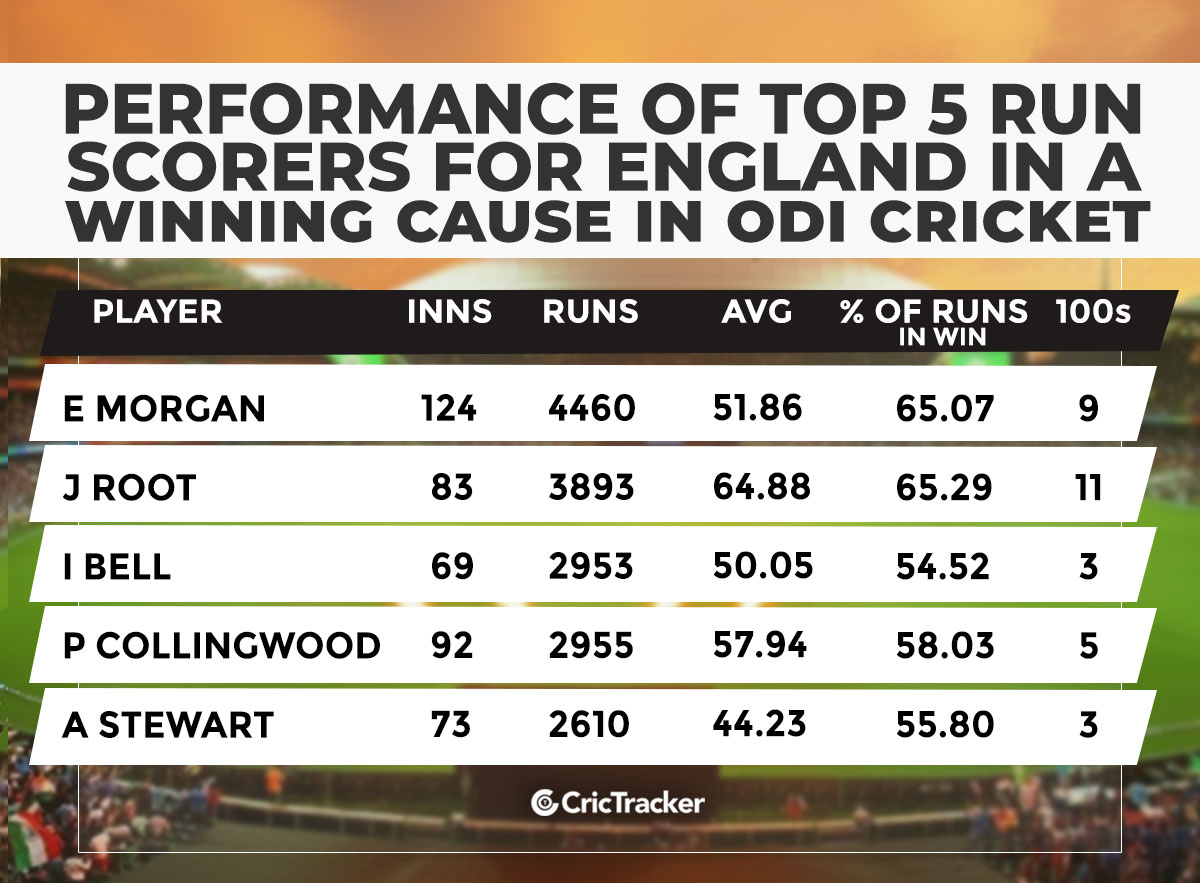 When we look at the table above, we find that Morgan has played a pivotal role in a win for the England side in ODI cricket. In fact, Morgan is the only batsman to have scored over 4000 runs in a winning cause for England in ODIs.

But then, another important point to note here is that, out of the 5 batsmen, Morgan and Root have the highest percentage of runs scored in a winning cause for England. 65.29 per cent of Root’s runs have come in a win for England, and he is closely followed by Morgan, whose percentage is 65.07 per cent.

The likes of Bell, Collingwood and Stewart have scored less than 60 per cent of their runs in a win for England. With his gargantuan record in ODI cricket as well, Morgan will easily qualify as the second greatest willow-wielder for England, just behind Root.

Morgan is the highest run-scorer for England in both ODI’s and T20I’s, and can even stake claim to being the greatest limited-overs willow-wielder for the England side. He is definitely the greatest T20I batsman for England and there is no debating that. As far as ODI cricket is concerned, he will come second in the pecking order of the greatest ODI batsmen for England just behind Root.

But then, when we look at the complete package, look at both ODI and T20 cricket, Morgan’s name might come on top when we talk about the greatest batsmen ever for England in limited-overs cricket.

Note: All stats have been taken from Cricinfo and Howstat cricket and have been updated as on 17th September 2020