Virat Kohli kept his no.1 spot in the ICC ODI batsmen rankings with 890 points to his name.

Indian skipper Virat Kohli has continued his dominance at the top of the recently released ICC ODI batsman rankings. Despite the fact, Kohli-led Indian team lost the 5-match ODI series against Australia; he was the top-scorer for and also scored two back-to-back centuries. Kohli was in amazing form in the Nagpur and Ranchi one-day matches, as his 40th ODI century helped the Indian team beat Australia on a tricky pitch. At Ranchi, however, Kohli’s century went in vain as India lost the match in a tough chase.

Virat kept his no.1 spot in the ICC ODI batsmen rankings with 890 points to his name. India opener Rohit Sharma also keeps his no.2 spot in the ranking with 839 points, despite a luke-warm outing against Australia in the recent series.

New Zealand’s Ross Taylor is at the no.3 spot with 830 points. However, the rankings saw South Africa’s wicketkeeper and opener Quinton de Kock slingshot his way to a no.4 spot with 801 points. The South African wicketkeeper-batsman scored 353 runs, including a hundred and three fifties, in the five-match ODI series against Sri Lanka.

South Africa skipper Faf du Plessis moved to the no.5 spot with 272 runs to his name in the ODI series against Sri Lanka, where he was the second highest run-getter behind De Kock. The biggest jump in the rankings was made by Martin Guptill, who jumped ten places to make it to the ninth spot following his performance in the three-match ODI series against Bangladesh.

Jasprit Bumrah continues to reign supreme at no.1 in ODIs

Jasprit Bumrah is still the number one ranked ODI bowler in latest ICC rankings. He has 774 points in the ICC ODI Bowlers rankings. Jasprit Bumrah picked 7 wickets in the recently concluded ODI series against Australia.

New Zealand’s Trent Boult comes in at the no.2 spot with 759 points to his name and Afghanistan’s leg-spinner Rashid Khan is at number three in the rankings with 747 points. Imran Tahir, who played his last ODI series in front of the South African crowd, was the top wicket-taker against Sri Lanka with nine wickets to his name. Rabada shared the second spot (8 wickets) with the fellow pacers Lungi Ngidi and Anrich Nortje.

Australian Pat Cummins moved up 13 places to the seventh spot with 681 points to his name in the rankings. He was the highest wicket-taker for Australia in the ODI series against India with 14 wickets.

India and England continue to occupy the top two spots in rankings with England at no.1 with 123 points and India at no.2 with 120 points, despite England drawing the ODI series against West Indies and India losing its ODI series to Australia. 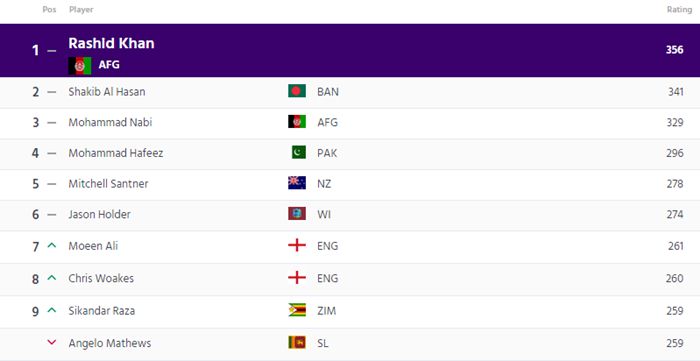