Which team has finished first on points table in IPL for the most number of times?

Which team has finished first on points table in IPL for the most number of times?

Interestingly, only Kolkata Knight Riders (KKR) hasn't acquired the number 1 spot in the points table in any edition of the league.

The ongoing 13th edition of the Indian Premier League (IPL 2020) completed its league stage on November 3 with Sunrisers Hyderabad claiming a victory in a do-or-die match against Mumbai Indians (MI) to confirm a spot in the playoffs. With an ambition to win the coveted Trophy, each team strives hard in the league stage every year to finish at the top of the table and gain momentum for the qualifiers.

This season was no different as the franchises left no stone unturned to turn the results in their favour. However, just like the previous edition, Mumbai Indians again stamped their authority over the T20 Championship by topping the points table with 18 points. Hailed as one of the most successful franchises of the cash-rich league, Mumbai has achieved this feat record-four times in the 13-year history.

KKR – The only team not to top the table yet

The Mumbai-based team had topped the table for the first time in the 2010 edition and had repeated the same in 2017, 2019 and now in 2020 too. In the charts of finishing at the top of the points tally the most number of times, MI is followed by three-time title holders Chennai Super Kings and Delhi Capitals (DC), who have achieved this remarkable feat two times each.

The five IPL franchises namely Royal Challengers Bangalore (RCB), Rajasthan Royals (RR), Sunrisers Hyderabad (SRH), now-defunct Gujarat Lions (GL) and Kings XI Punjab (KXIP) finished as the table-toppers in one season each. The Royals had a stunning start to their campaign in IPL as they not only acquired the top position after the league stage in the inaugural edition but also registered victory in IPL 2008.

The Bangalore-outfit had topped the table in 2011 while the Punjab-based franchise did this in the 2014 edition. IPL 2016 saw Gujarat topping the table while the Orange Army had a spectacular run in the 2018 season. Interestingly, only Kolkata Knight Riders (KKR) hasn’t acquired the number 1 spot in the points table in any edition of the league.

Most finishes as table toppers in IPL history 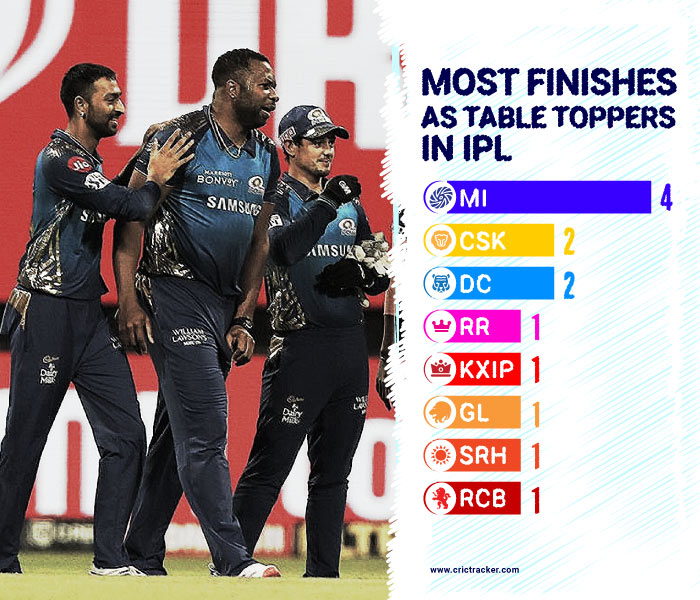