Who will be the captain of your fantasy team? Mandhana or any overseas player?

After the one-off exhibition match last year, the Women’s T20 Challenge is back with a bang this season with a new format. This time around, a total of three teams, comprising of 13 players each, will fight it out in a tri-series and the first match will be between the Supernovas and the Trailblazers. While India’s T20I captain Harmanpreet Kaur has been named the Supernovas skipper, Smriti Mandhana is at the helm for the Trailblazers.

The absence of Australian players will be felt this year thanks to the disagreement between BCCI and Cricket Australia. Though there are top cricketers from other countries playing the series as well. Each team will play the other only once, each match becomes important and these two teams will have to hit the straps from the word go.

The Supernovas outfit is boasted by the presence of Jemimah Rodrigues, Kaur and Poonam Yadav. They possess some of the best foreign players in Sophie Devine, Natalie Sciver and Chamari Athapaththu. These three players will definitely play while Lea Tahuhu is the fourth overseas player. For the Trailblazers, Mandhana will have to take up the role of scoring quick runs while she will be assisted by Suzie Bates and Stefanie Taylor.

The 1st game of the Women’s T20 Challenge 2019 between Supernovas and Trailblazers will be hosted by the Sawai Mansingh Stadium in Jaipur.

The weather is extremely hot in Jaipur at the moment and the temperature will hover in the mid-30s during the match. There is no rain at all in the forecast while dew is also not expected to play a huge part.

The scores around 160 were regularly recorded in Jaipur during the Rajasthan Royals’ home campaign in IPL this season and a similar kind of wicket is expected for this game as well. The spinners should have a good time with the pitch being a bit on the slower side.

Don’t miss out the Match Predictions, Bookmark the page!

Stafanie Taylor in the last 10 months in Women’s T20s: 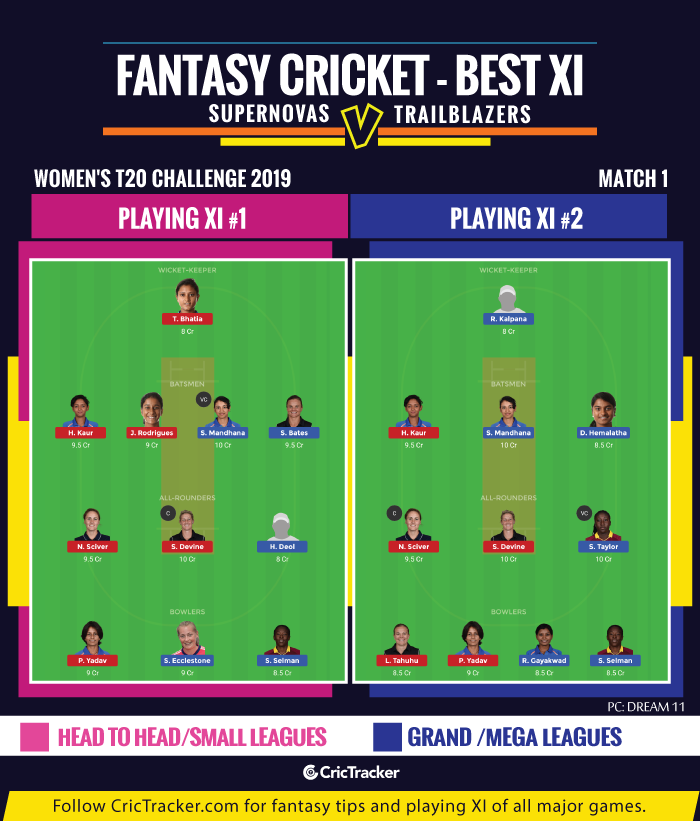 It is tough to have Chamari Athapaththu along with the likes of Sciver, Devine, Kaur and Taylor in the team. One of these players will have to be left out.

Make all-rounders captain and vice-captain as they are likely to play maximum balls and then bowl four overs as well.

It is tough to predict the winner but Supernovas look a strong outfit and they might take the early honours.