Afif Hossain is a budget pick at 8.5 credits. 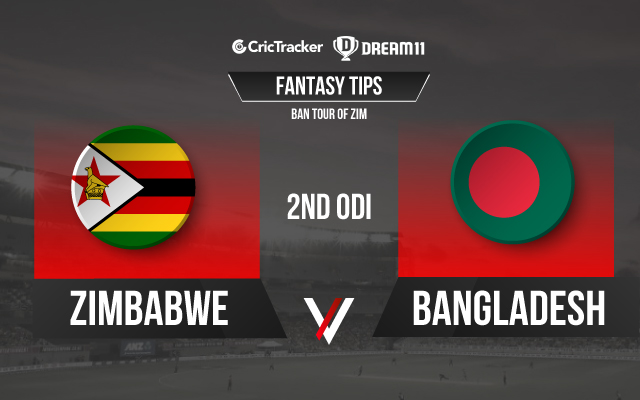 Zimbabwe will take on Bangladesh in the 2nd ODI on Sunday. Zimbabwe conceded plenty of runs in the death overs and as usual, the batter’s parade handed them another defeat against Bangladesh. Now they are under tremendous pressure to win the 2nd ODI and keep the series alive.

Liton Das’ timely century and star campaigner Shakib Al Hasan’s five-wicket haul gave visitors a 155-run victory in the 1st ODI. Bangladesh are unbeaten against Zimbabwe in the last 5 ODI matches. They got a much-needed victory in the 1st ODI which will put them in the driver’s seat to win this series.

The bowlers can make use of the short delivery as a wicket-taking option. Pacers can extract extra bounce if they bend their back. Having said that, the batters will do get ample opportunities to score runs if they play according to the merit.

Tamim Iqbal should blame himself for playing an unnecessary shot in the early part of the innings in the 1st ODI. He is still a class player who has the ability to bounce back in the 2nd ODI.

Playing in his 200th ODI match, Brendan Taylor got a perfect start to his innings until he played a rash shot and got out for 24 runs which included 3 fours.

After a quiet ODI series against Sri Lanka, Shakib Al Hasan has proved his critics wrong by picking up 5 wickets in the 1st ODI and became the leading wicket-taker for Bangladesh in the ODIs.

Blessing Muzarabani gave a breakthrough in the 2nd ball of the match in the 1st ODI by dismissing Tamim Iqbal. He returned with the figures of 2 for 47 in his full quota of 10 overs.

Taskin Ahmed was impressive with the new ball and dismissed Wesley Madhevere by an unplayable delivery. He is a good pick for your fantasy teams.

Liton Das was the savior for Bangladesh in the 1st ODI. He stuck to basics when other batter’s were making their way into the pavilion. He scored his 4th ODI century and got out in the end for well-made 102 runs from 114 balls.

Regis Chakabva looked solid in the 1st ODI and played some delightful shots in his innings of 54 runs from 51 balls. Despite running out of partners he played his natural innings and helped Zimbabwe to surpass 100 run-mark.

Blessing Muzarabani is a wicket-taking bowler, who did really well in the 1st ODI. It’s a risky choice to pick him as the skipper.

Afif Hossain’s late fireworks helped Bangladesh to put a match-winning total in the 1st ODI. It’s worth a risk and you can pick him as your fantasy team skipper.

Due to plenty of options in the bowler’s slot, it’s difficult to pick Shoriful Islam in the final eleven, though he did his job quite well in the 1st ODI.