Zimbabwe vs Bangladesh, 2021 Match Prediction – Who will win today’s 2nd T20I match between ZIM vs BAN?

Zimbabwe vs Bangladesh, 2021 Match Prediction – Who will win today’s 2nd T20I match between ZIM vs BAN?

Brendan Taylor has been rested for the T20I series and Sikandar Raza will lead in his absence.

Bangladesh dominated the ODI series against hosts Zimbabwe by whitewashing them 3-0 The result in ODIs may prove that Zimbabwe were outplayed, but the fact is, the home team showed much more fight and came close to winning the second ODI.

But all is not lost as they can give a tough fight and hope for a turnaround. There are back-to-back T20Is, and Zimbabwe will hope to start well and seal the deal in the first two games itself. Tamim Iqbal’s absence sure gives the home side the head start and, they will hope to make early in-roads in the second T20I against Bangladesh which will be played on Friday (23 July).

But Zimbabwe too has their fair share of injuries and other problems, as their star batter Brendon Taylor has opted out of the series. But the hosts can take heart from the fact that they gave Pakistan a run for their money during the last T20I series and won a game too. So, Zimbabwe will look for the positives and look to win the series.

The pitch in Harare has good bounce and carry and always seems to assist both the batters and bowlers. In the shortest format, putting runs on the board often creates pressure for the opponent batting second. History suggests batting first would be ideal and both the captains Mahmudullah and Sikandar Raza will look to bat first at the venue.

Bangladesh’s talismanic all-rounder Shakib Al Hasan is back with a bang and led the batting and bowling departments in the ODI series of the game, by making handy contributions in both. He scored 145 runs and picked up eight wickets. The 34-year-old is once again be key for the Tigers if they want to do well in the T20I series.

Luke Jongwe made heads turn when he picked up four wickets against Pakistan during the team’s last series. He was again the side’s best bowler during the three ODI matches against Bangladesh as he picked six wickets. With momentum by his side, the right-arm bowler will look to help his team win the game, by making early inroads. 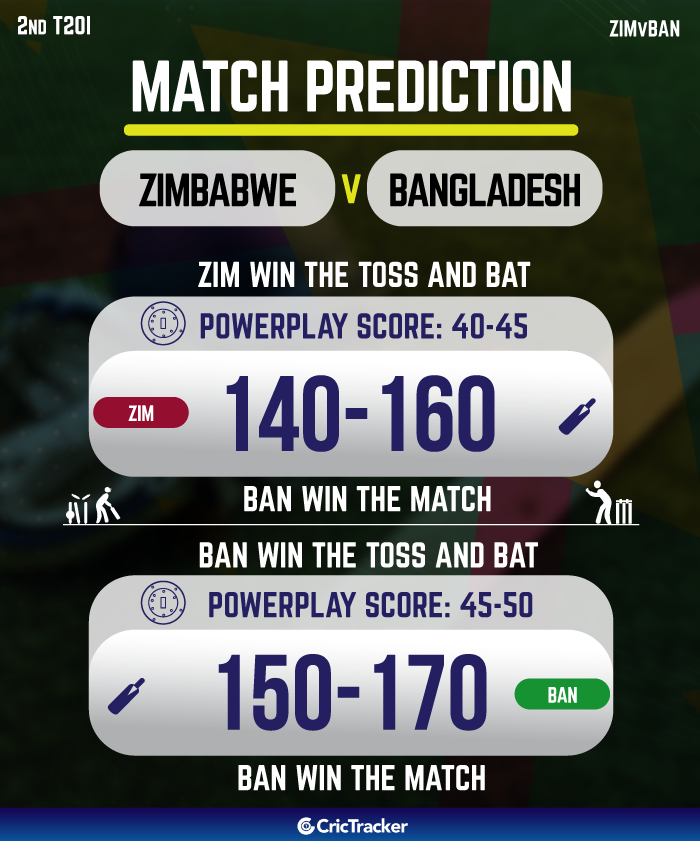