All the statistical highlights from the first day’s play of the Afghanistan-West Indies Test in Lucknow.

Rahkeem Cornwall was the star on the opening day of the Lucknow Test match where Afghanistan rolled over for a low total against West Indies. The off-spinner claimed as many as seven wickets to restrict the Afghans under 200. The home team were well placed at 84/1 in the first session before losing six wickets for 27 runs. They recovered from 111/7 to finish on 187 on what looked like a turning track. The visiting team lost two wickets for 68 runs in the 22 overs of play before the stumps.

All the statistical highlights from the first day’s play of the Afghanistan-West Indies Test in Lucknow:

A rare win toss and bowl first in India:

Seven wickets in a day for Rahkeem: 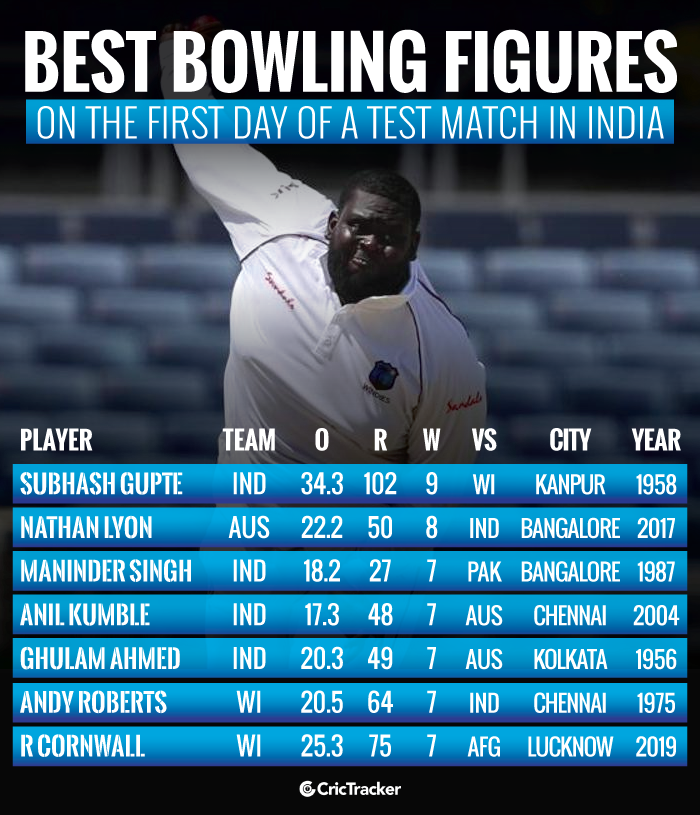 A record bowling performance from Cornwall:

7/75 – Rahkeem Cornwall’s bowling figures of 7/75 are the 2nd best bowling figures in Test cricket by a West Indies bowler on the Indian soil. Sir Andy Roberts took 7/64 in the 1975 Chepauk Test against India also on the first day of the match.

7/75 – Cornwall’s figures are also the 2nd best for a West Indies spinner in Asia. Devendra Bishoo recorded figures of 8/49 in the 3rd innings of the D/N Test against Pakistan in 2016 hosted by Dubai.

Lucknow gets another Test venue:

3 – The Ekana Cricket Stadium in Lucknow, named after Bharat Ratna Shri Atal Bihari Vajpayee, became the 3rd venue in Lucknow to host a Test match. The University Ground in 1952 and K.D. Singh Stadium in 1994 were limited to one Test match apiece.

39 – Javed Ahmadi’s 39 is the highest individual innings during Afghanistan’s innings. This is only the 2nd instance in more than ten years that no batsman got to 40s in the 1st innings of a Test match hosted by India.

Interestingly, the other such instance was also recorded in a Test match played this week. Bangladesh’s first innings had a highest score of 29 against India during the opening innings of the D/N Test which began on last Friday in Kolkata.