Who will play at number four?

Team India will start their campaign in the ongoing Asia Cup on Tuesday with a relatively easy game against Hong Kong who lost their opening encounter against Pakistan. Though the Rohit Sharma-led side will be keen on not taking their opponents lightly. More than anything, it will be interesting to see the way the players returning from England will acclimatise to the conditions in the United Arab Emirates.

Also, the fact that the Men in Blue will be playing back-to-back matches might force the think tank to rest some of the players to give their best against the arch-rivals. The absence of Virat Kohli must’ve weakened the batting line-up but that doesn’t mean that the other batsmen are mere pushovers. Places are up for grabs in the middle-order and this tournament is a great opportunity for a few players to nail their spot ahead of the World Cup.

Here we bring you India’s predicted XI for this game:

The most preferred opening duo is back for India. Rohit Sharma and Shikhar Dhawan have pummelled the best bowling attacks together in the limited-overs format and both will relish the conditions to bat. The former is also the captain of the team and will have to lead from the front to get the feel in the middle ahead of the marquee clash. He will be fresh after the break and will be raring to hit the straps straight away.

The most important thing about Dhawan would be his mindset. A poor Test series in England might have affected his confidence. But he loves the ball coming on the bat which is what the conditions in the UAE will offer. Dhawan is a completely different batsman in the coloured clothing and should put behind the barren run with the bat in England behind to be successful in the tournament. He has a great chance to get going against Hong Kong before meeting Pakistan on the very next day.

Three of the four middle-order batsmen will return to the fold in the Indian team after a significant period of time. This is where the problems might start for India in this tournament. In the absence of Virat Kohli, Ambati Rayudu is likely to play at number three as KL Rahul has just arrived after a hectic tour and will be rested. Rayudu is a consistent batsman and good scores in this competition will cement his place for a long time in the squad.

Manish Pandey wasn’t even dismissed in the quadrangular series which preceded the Asia Cup. He made a comeback on the basis of some splendid form and should be confident of making the opportunity count. This will be the last chance for him to stake his claim. MS Dhoni‘s aura is completely different but one might feel that he will also be under pressure after what transpired in England. His slow batting came under the scanner and the veteran will have to show some urgency with the willow in hand.

Kedar Jadhav walks back into the team without any doubt which also relieves the captain a bit. India were lacking a part-timer in the line-up and Jadhav can roll his arm over. Moreover, he has the knack of breaking partnerships as well. With the bat, more often than not, he will be tipped to finish the innings on a high which Kedar has done in the past.

As a Test all-rounder, he has been criticised a lot. But Hardik Pandya is a proven performer in the limited-overs format. He has reached Dubai on Sunday which gives him only a day to recover before playing in the first game but that shouldn’t be an issue for him. His all-round ability gives a massive edge in both the departments to the Men in Blue and his role will even enhance when India will play crunch games.

Bhuvneshwar Kumar regaining his fitness is the best thing to happen in the recent times. He has also played a 50-over game for India A which has brought him back in contention. Bhuvi continues to be India’s best and preferred bowler in ODIs and the match against Hong Kong will give him an opportunity to assess himself. He will be geared up to pick more wickets after missing the recent Test series.

Jasprit Bumrah might be rested after playing three back-to-back Tests which is likely to pave way for Khaleel Ahmed’s international debut. Even the chief selector MSK Prasad has iterated that they are looking at him as a potential World Cup prospect. The youngster has impressed many with his left-arm pace and should be looking to make a mark in this tournament.

The wrist-spinners are back. Kuldeep Yadav and Yuzvendra Chahal will team up to torment the Asian teams now. Both were successful in England and it remains to be seen if they have more in the kitty to trouble the batsmen. Much will depend on their performance and the pitches in the UAE will definitely suit the duo. 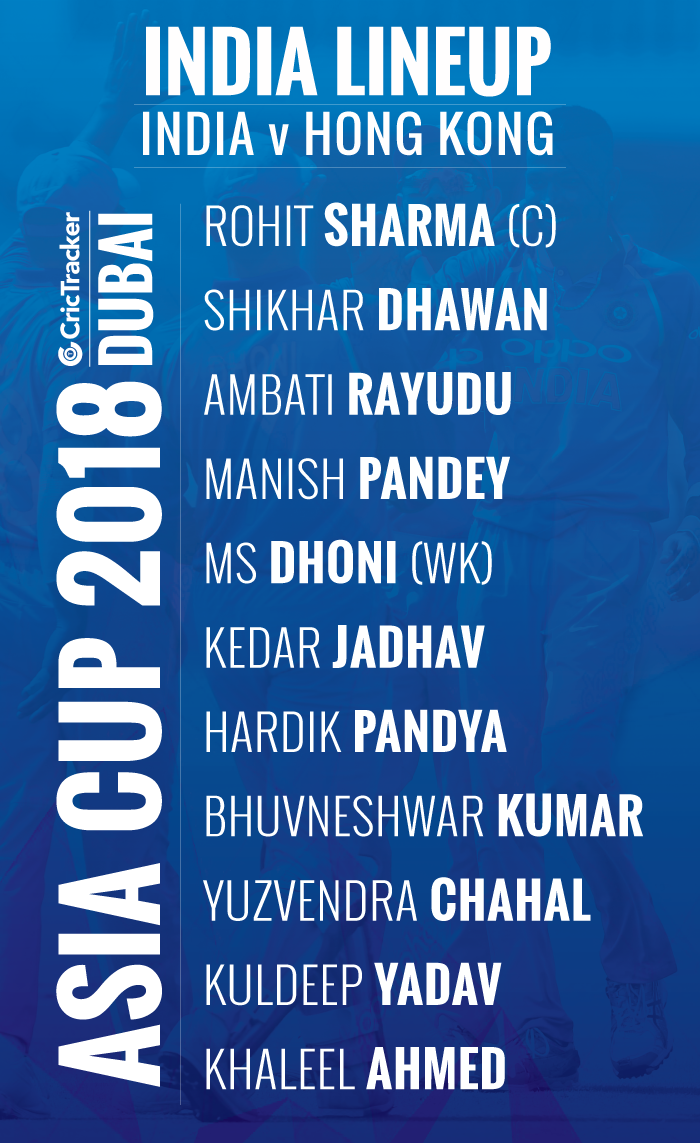