Should Virat Kohli be made captain of your Fantasy team for Bangalore vs Rajasthan match? The 15th match of the Indian T20 League 2020 will be played between Bangalore and Rajasthan at the Sheikh Zayed Stadium in Abu Dhabi.

This game is scheduled to start at 03:30 PM IST (02:00 PM local time) (10:00 AM UTC). The game will be telecasted on the Star Sports Network (Available in English, Hindi, Telugu, Tamil, Kannada, and Bengali). Also, live streaming will be available on Disney+ Hotstar.

Rajasthan suffered a massive loss in their match against Kolkata and that just added on to the many questions about their middle-order in the absence of Ben Stokes. As compared to the top three, the middle order of Rajasthan looks very weak. More so, it is an inconsistent middle-order. They only have Jofra Archer in that lower middle-order, who has looked consistent with his hitting skills. Sanju Samson and Steve Smith hold the key for them in the batting department while their bowling will be spearheaded by Jofra Archer,

Bangalore, on the other hand, have got a lot to ponder about. They failed to defend 80 runs in the last four overs of defense against Mumbai and by all means and with all respect to the Bangalore-based side if one can’t defend 80 runs in 4 overs without going into the super over, a win isn’t deserved. Bangalore will look to get their bowling combinations right, but they are likely to go in with an unchanged XI.

The weather for the afternoon game on Saturday is going to be relentless. The sun will be shining down relentlessly, and it is likely to be a bit sultry. The temperatures will be around 35°C for the most part of the game.

The previous game in this venue was played on a new track and it hasn’t looked much different than the one that was used earlier. This track is on the slower side and has been offering some good amount of assistance to the spinners. However, once a batsman gets his eye in on this track, he is likely headed for a big score.

Average first innings score: 170 (Based on the last 5 games)

Chris Morris was seen batting and bowling in the nets. The final call on his availability will be taken before the match.

Washington Sundar (8 credits) – Washington Sundar looked like the only bowler from Bangalore against Mumbai, who knew what he was doing with the ball in hand. In the 3 matches that he has played, the all-rounder from Karnataka has picked up 1 wicket but has been bowling at an economy of 4.57.

Tom Curran (8.5 credits) – Tom Curran was the best batsman in Rajasthan’s run-chase against Kolkata. He scored a brilliant quick-fire half-century, highlighting his abilities with the bat. With the ball, he hasn’t quite set the stage on fire but is a threat, nonetheless. 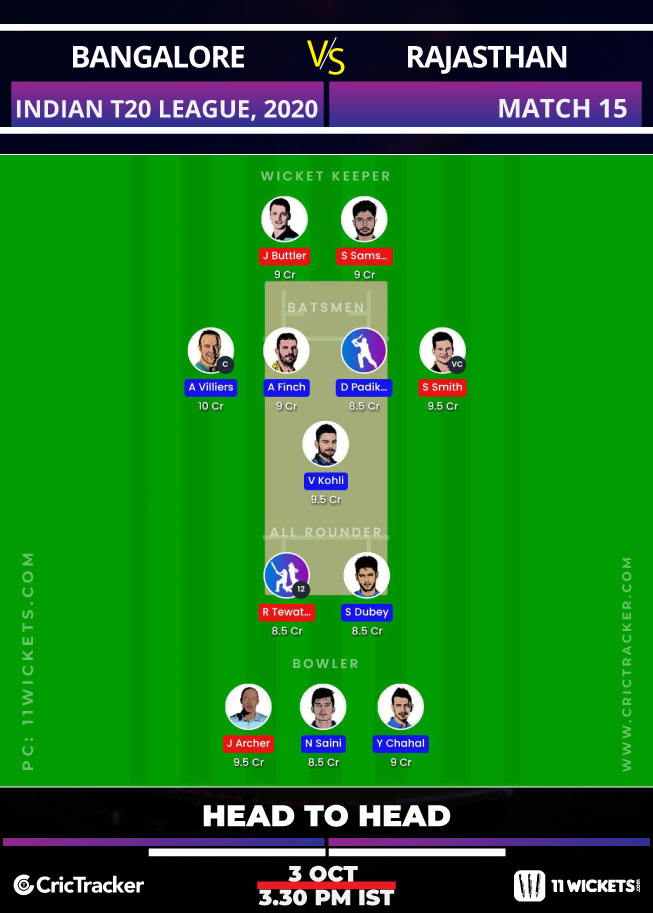 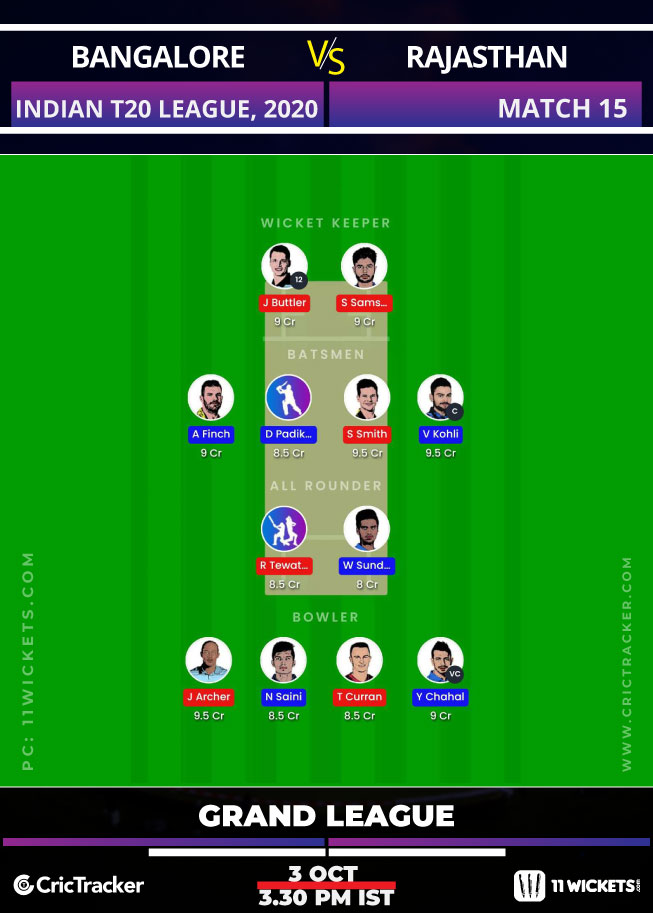 It is advisable to have plenty of spinning options in your squad. The track is assisting spinners and having said that, keep an eye out for the batsmen who play spin well.

Rajasthan are expected to win this match.