Australia are undefeated in the CWG 2022 women's cricket competition.

India Women will be locking horns with Australia Women in the Gold Medal match of the women’s cricket competition being played at the Commonwealth Games (CWG) 2022 at Edgbaston, Birmingham. The Indian eves registered a hard-fought four-run win in their semifinal encounter against England.

The bowlers held their nerves in the death overs to snatch victory from the jaws of defeat and qualify for the Gold Medal match. However, they have a task at hand against an Australian team that defeated them in the group stages by three wickets.

Australia registered an impressive five-wicket win over New Zealand in the second semi-final to earn a place in the final. They have been undefeated throughout the tournament and are just one victory away from making history at the Commonwealth Games.

The Australians are the reigning WT20 and ODI World Cup champions and are the outright favorites to win the CWG gold medal with skipper Meg Lanning at the helm and some of the big names like Alyssa Healy, Beth Mooney, Alana King, Ashleigh Gardner having a quality amount of big match temperament.

The Edgbaston wicket is batting-friendly and the batters have enjoyed batting on this surface throughout the tournament. The pitch has remained good for batting second and that is why most of the sides have preferred chasing. However, with this being a big final, the captain winning the toss would have no hesitation in batting firs to transfer the pressure on the opposition.

Smriti Mandhana is peaking at the right time in the ongoing Commonwealth Games 2022. The star opener has already registered two half-centuries to her name and the big one came against England where she scored 61 runs off 32 deliveries at an outstanding strike rate of 190.6. She would be hoping to showcase a much better performance in the grand finale.

This has been a dream tournament for emerging pace sensation Renuka Singh Thakur. She might have gone wicketless in the semifinal against England but has registered nine scalps to her name so far in four matches including two four-wicket hauls. The Indian eves would be expecting Renuka to come out all guns blazing with the ball in hand against Australia in the summit clash. 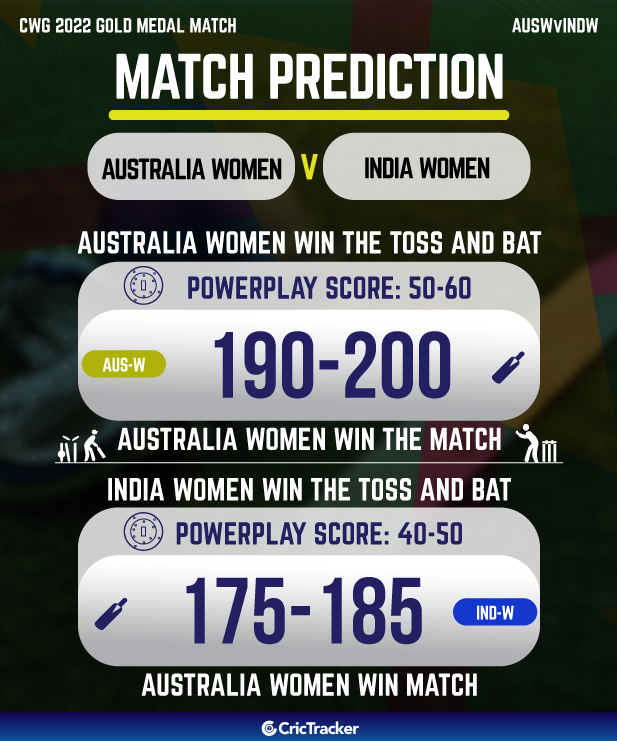