RCB have a challenging task ahead of them at the MCA Stadium in Pune as the take on the Super Kings.

Royal Challengers Bangalore (RCB) managed to roll over the Mumbai Indians (MI), which has kept them alive in the tournament. However, their opponent in the next game of the Indian Premier League (IPL) is MS Dhoni’s Chennai Super Kings (CSK) who have been a brute force. RCB’s bowling has been a worry, but the fact they defended a score last time, would have motivated them.

Chennai’s batting lineup has been hard to counter for the best of bowling attacks. More importantly, someone or the other has always stood up and delivered the goods for them. Virat Kohli’s men will be hoping to perform with both bat and ball. In our article, let’s take you through their predicted eleven for the upcoming game.

RCB will open with a new opening duo. Quinton de Kock has flown back home for a marriage and won’t be taking part in the game. Parthiv Patel, who is a part of the side as a specialist wicketkeeper, will come in place of the South African. He has previously been impressive as an opener in the IPL and thus he will be sent in to open along with Brendon McCullum.

McCullum has played adequately well in the last couple of matches and deserves to be retained in the eleven. He has scored runs at a good clip and given the team momentum. The duo has a lot of responsibility to make the best of the powerplay. Patel hasn’t played a single game thus far and will be hoping to produce an innings of substance and stay in contention for selection even when de Kock returns.

The middle-order has been a tad off colour in the absence of AB de Villiers, who picked up viral fever and had to opt out of the last couple of games. However, his return will undeniably inject confidence into the franchise. He has already played two match-winning knocks and would be keen to recreate his magic and lead his team’s batting against the might of the Super Kings.

Virat Kohli’s role with the willow has always been a pivotal factor behind RCB’s performances. He will have to deliver if the visiting team has to come out trumps. Mandeep Singh has also been decent enough down the order and gave impetus to the innings in the hour of need.

Colin de Grandhomme and Washington Sundar are the all-rounders who haven’t quite lived up to their potential thus far. De Grandhomme bowled decently the other night against the Mumbai Indians (MI) and has also played invaluable cameos in the death overs. Washington Sundar has been taken for runs, but he certainly has the potential to make a strong comeback and hopefully, he should make an impact against CSK.

The bowlers were able to defend a competitive target, which would have spurred their confidence to some extent. Tim Southee’s inclusion has strengthened their bowling attack, which was clearly visible against Mumbai. He mostly takes charge during the powerplay and the death overs and he has done a fabulous job.

Umesh Yadav is the prime component in their setup and has been amongst the wickets at the top. RCB would want their premier bowler to ruffle the feathers of the belligerent CSK batsmen. Yuzvendra Chahal’s leg-breaks bamboozled the Super Kings last time around, which might not be easy on the Pune-wicket, with little help on offer. 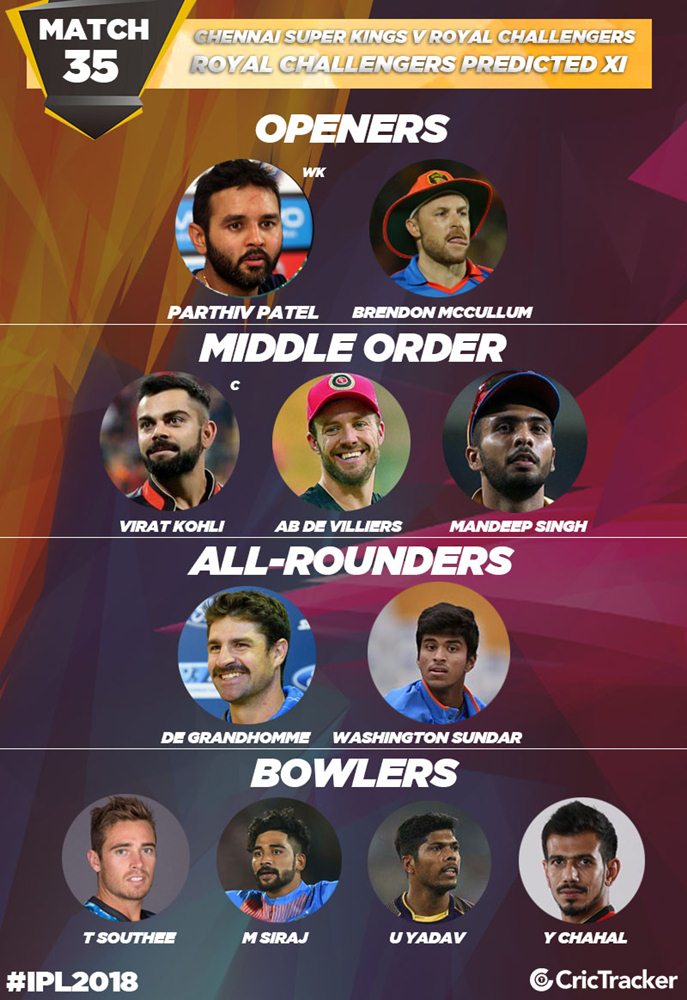