There's no update on Ben Stokes yet. 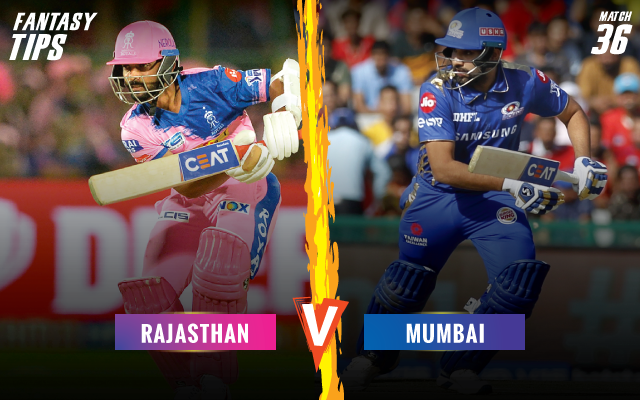 The Rajasthan Royals (RR) following their 12-run defeat against the Kings XI Punjab (KXIP) at the PCA Stadium in Mohali now find themselves in a must-win-scenario in every game from now onwards. Ajinkya Rahane’s men are placed in the seventh position of the points table and are gasping for breath. Their next match is against the Mumbai Indians (MI) at the Sawai Mansingh Stadium in Jaipur.

Mumbai, on the contrary, are on a rampage after winning four out of their last five contests. Last night Rohit Sharma and Co gave Delhi Capitals (DC) nightmares in the latter’s own den with a 40-run victory. Subsequently, they moved one inch closer to a playoff berth. The Royals have beaten Mumbai five out of the seven instances in Jaipur, but current form undoubtedly gives the visiting team the upper hand.

The 36th game of the IPL between RR and MI will be hosted by Sawai Mansingh Stadium in Jaipur.

The temperature during the match time would start from 34 degree Celsius and would come down to 31 degree Celsius by the end. The humidity would be on the lower side as well. There will be a bit of a cloud cover, but that’s far from threatening. Dew is not expected to play a part.

The pitch has been a good one for batting, but the bowlers have also had their say. Since the first match between RR and KXIP, all three games were won by the team, batting second. Hence, the opponents may want to field first after winning the toss. Nevertheless, the track may favour the bowlers a bit more, bearing in mind that dew won’t be coming to the fore.

Any news on Ben Stokes’ fitness is yet not known.

Picking more players from the Mumbai team would be advisable.

MI are expected to win this encounter.