All the major stats and numbers that were recorded by Virat Kohli in the second ODI.

In the recent times, Virat Kohli batted like breaking at least one record every time he walked out to bat irrespective of the format. The second ODI against Windies was one such instance as the Indian captain batted through the innings to score an unbeaten 157. Kohli kept on hunting records on his way through to his 37th ODI hundred and his second consecutive ton of this series. His 129-ball 157-run innings was constructed by 13 fours and four sixes to help India finish on 321/6 after 50 overs.

All the major stats and numbers that were recorded by Virat Kohli in the second ODI:

1 – Virat Kohli became the fastest to complete 10000 runs in ODI cricket in terms of matches, innings, balls played and days from the debut. Kohli got to the milestone in 213 matches and 205 innings while Sachin Tendulkar needed 266 matches and 259 innings.

Kohli’s 10000th ODI run came off the 10813th ball he faced while the previous fastest Sanath Jayasuriya needed 11296 balls. The Indian captain got to 10000 ODI runs in 3719 days from his debut making him the quickest by surpassing Rahul Dravid (3969).

2 – Kohli is now the second captain in ODI cricket with two 150+ scores after Andrew Strauss. The Delhi-born batsman scored an unbeaten 160 against South Africa earlier this year. 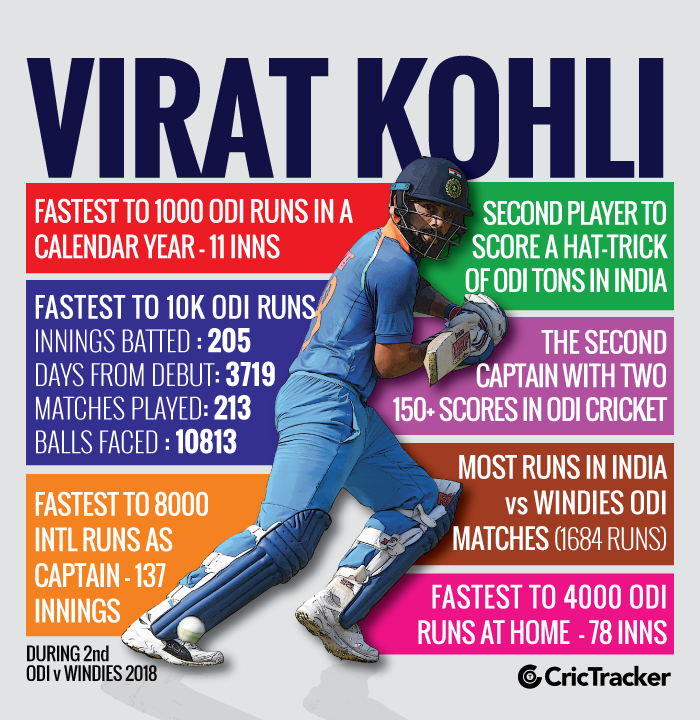 3 – Virat Kohli became only the second player to score a hat-trick of ODI centuries in India. He scored a century during the last game of the home ODI series in 2017 against New Zealand before back to back tons against the Windies. AB de Villiers scored four centuries in a row between 2010 and 2011 in India.

137 – Kohli completed 8000 International runs as captain in only 137 innings making him the quickest to the milestone. Among the previous eight players to achieve this, Ricky Ponting was the quickest though he took 187 innings; fifty more than Kohli.

1684 – Virat Kohli’s 1684 runs in the India-Windies ODI matches are the most by any player going past Sachin Tendulkar’s tally of 1573 runs.