Amelia Kerr and Katherine Brunt can punt picks for captaincy or vice-captaincy for this game.

The 2nd of the 3-match ODI bilateral series between New Zealand Women and England Women will be played on 26th February 2021, at University Oval, Dunedin.

The match is scheduled to start at 03:30 AM IST and it will be streamed live on Fancode.

New Zealand Women will lock horns against England Women in the 2nd ODI match on Friday. In the first ODI match of the series, England Women came out victorious by 8 wickets. After being asked to bat first by the visitors, New Zealand posted an average total of 178 runs in the 50-over game. Hayley Jensen scored a fifty too and she was New Zealand’s highest scorer as well.

England Women have got themselves a 1-0 lead in this series. Heather Knight and Tammy Beaumont gave the hosts a flying start. Tammy Beaumont was the star of the match as she smashed magnificent 71 runs innings. New Zealand will be trying to bounce back from their loss in the last game, wheras England will look to win this match and seal the series.

It will be partly cloudy here in Dunedin on Friday. The temperature will hover around the 17 degrees Celsius range and there is a 10% chance of precipitation for this match.

The surface is a batting-friendly one, with a good amount of help for the pacers on offer. The pitch is expected to be neutral and the captain winning the toss would prefer to bowl first.

Also Read: My experience of being a fast bowler helps me bowl arm balls: Axar Patel

Lea Tahuhu has been ruled out of the ODI series against England due to a hamstring injury.

Sophie Devine, the skipper of New Zealand, will be a must pick for this match. She will bat in the middle-order and will also bowl 5-6 overs. She can swing the ball in early overs and provide her team with some crucial wickets upfront. She was in good form in the recently held Women’s Super Smash tournament.

Amy Satterthwaite has played over 100 games in the ODI format for the New Zealand Women, scoring 6 centuries and 22 half-centuries so far. She averages over 38.93 in ODI. The Experienced batswoman will be looking to convert the good starts into big innings in this match and help her side register a win.

England Women Skipper Heather Knight is known for her all-round abilities. She has played more than 100 matches for England in the ODIs and has 19 half-centuries along with a century to her tally. She averages 37.83 in ODIs.

Natalie Sciver is another good all-round choice for our Dream Fantasy team. She has featured in 68 ODI games, wherein she has scored 1906 runs and has picked up 45 wickets. She will look to add more to her tally from this series and her ability to deliver on both sides of innings makes her a promising captaincy pick.

Danielle Wyatt usually opens the innings for her side and provides good starts. She has scored 1045 runs in 75 ODI games and can also prove to be handy with her bowling skills, which has helped her to pick up 27 wickets. 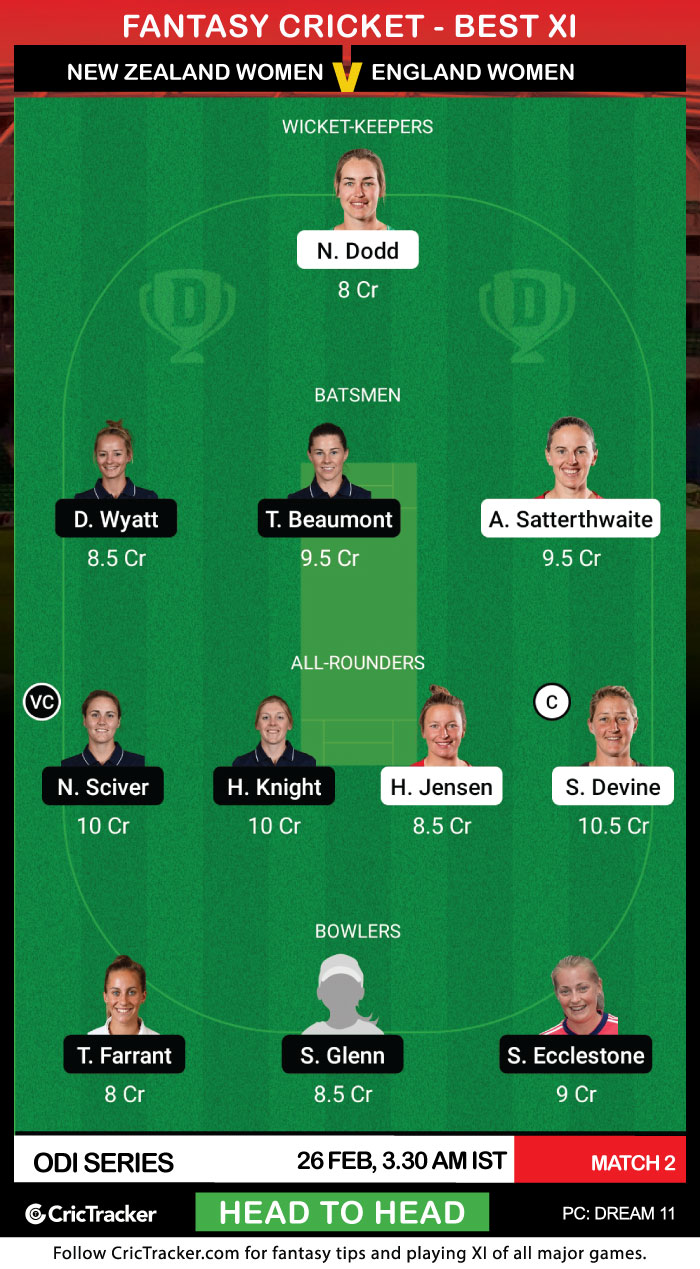 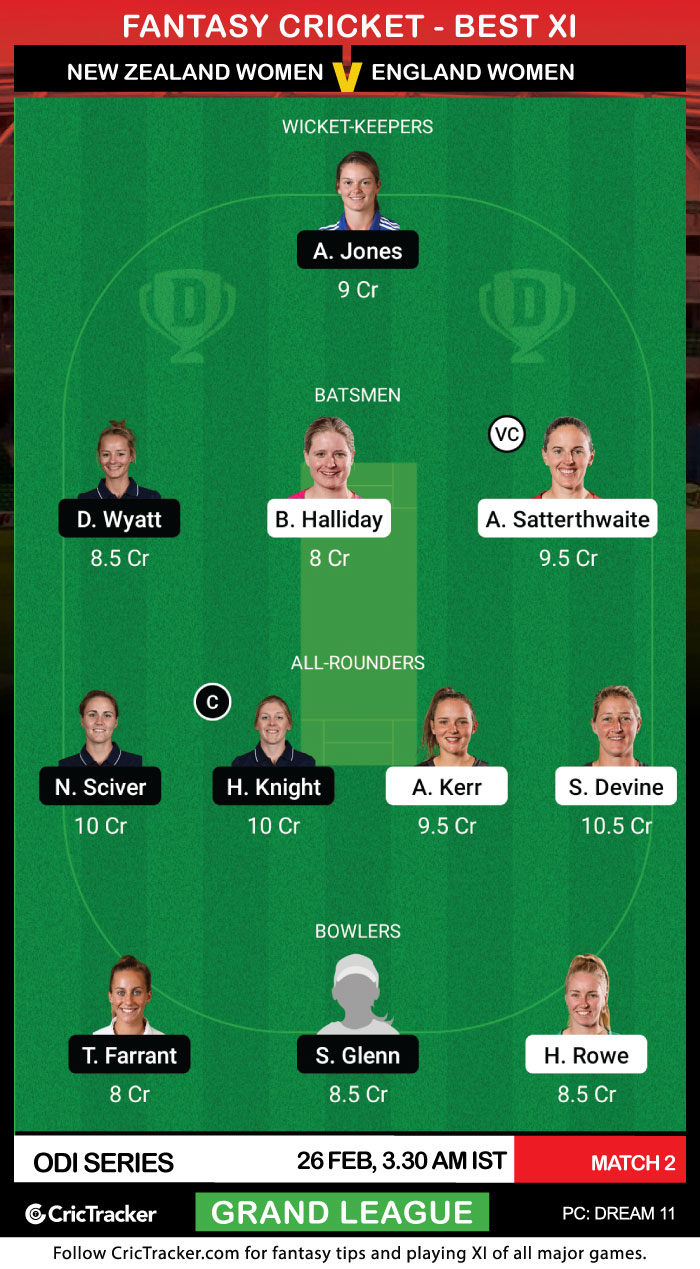 Amelia Kerr and Katherine Brunt can punt picks for captaincy or vice-captaincy for this game.

New Zealand Women are expected to win this match.