Indian opener Rohit Sharma has made the most of his chance at the top for the first time in his career. After scoring twin hundreds in his first Test as an opener in Vizag, the Mumbaikar went one better and smashed a double ton in the ongoing third Test match against South Africa in Ranchi, passing his previous best score of 177 which came in 2013, in his debut Test.

Rohit Sharma completed his 200 with a six to Lungi Ngidi and also became the first Indian batsman to reach this milestone with a maximum. With this amazing score, he also amassed 500-plus runs in the ongoing series. The right hander’s six-hitting spree has got him 19 maximums in the series so far and in the process, he also became the second-fastest to the 50 sixes in Test cricket landmark in his 30th match and 51st innings. He hit 6 sixes in his 212-run innings which led India to 497/9d in Ranchi Test match. The fastest to the mark, however, remains the Pakistani legend Shahid Afridi.

Then come the trio of some of the most brutal hitters in cricket let alone Test cricket. England’s Andrew Flintoff (50th six in 45th match and 71st innings) was one of the best all-rounders the lions had in the 2000s, who could change the face of the game on his own with both the bat and the ball.

Adam Gilchrist follows Flintoff with his 50th six in Test cricket coming in 53rd match and 74th innings. Regarded as the greatest wicketkeeper-batsman in cricket history, Gilchrist smashed sixes for fun and was a threat at no.7 on any wicket against any bowling attack.

Matthew Hayden reached his 50th Test six in 45th match and 75th innings. The holder of the second-highest Test score of 380, Hayden instilled fear in opponent bowlers from the start of the match with his intimidating figure and powerful batting. He was able to hit spinners as well, as his first double ton in Tests came against India in India in 2001.

Here is the list of Quickest players to 50 sixes in Test cricket: 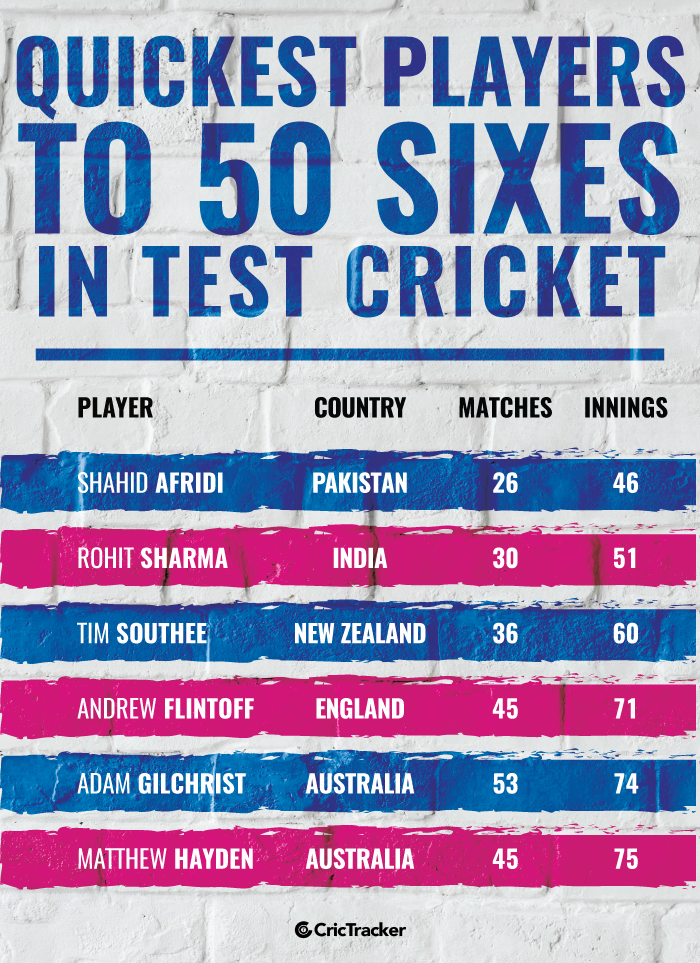