Virat Kohli walked out to bat at 126/2 in the first innings of the Sydney Test match.

The Virat Kohli-led India is on the way to becoming the first Indian side to win a Test series in Australia despite the fact that Kohli has had an average or below outing overall. The Indian skipper is well known for his gusty batting irrespective of the performances from other batsmen. However, in the ongoing Border-Gavaskar Test series, India’s No.3 batsman Cheteshwar Pujara has scored three hundreds and a fifty while Ajinkya Rahane too has chipped in with a couple of fifties.

This has eased the burden on Kohli who scored a century in the Perth Test and an 80 in the Melbourne Test by putting a marathon stand with Pujara that set up the win. The inclusion of Mayank Agarwal brought consistency at the top for India as the opener has scored the 70s and a 40 in the three innings so far. After electing to bat first, India lost their 2nd wicket on the score of 126, ten overs into the second session of the ongoing Test match in Sydney.

Kohli got off the mark with a boundary through the covers in the very first over he faced before he settled down. While batting on ten, he picked up a single and moved to 11 with that, the 30-year-old also completed 19000 runs across all the three International formats. Kohli got to this milestone in only 399 innings thus becoming the fastest by a fair margin. As many as 11 players and two Indians have aggregated 19000 International runs before Kohli but none got it in less than 430 innings.

The previous fastest to this milestone was Sachin Tendulkar – 432 innings and was followed by Brian Lara – 433 innings. However, in terms of matches taken, Lara is slightly ahead of Kohli having taken only 355 games compared to that of Kohli’s 358. Prior to Virat Kohli, the fastest to 18000 International runs were Lara (411 inns) and Sachin (412 inns) and they took 12 and 13 more innings than Kohi took to haul 19000 runs. 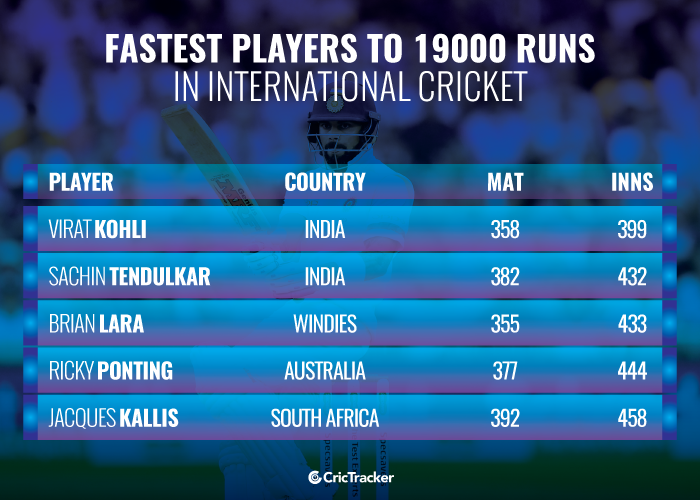