England have lost all five of their matches against the West Indies in T20 World Cups.

England and West Indies are set to cross swords in Match No.14 of the T20 World Cup on Saturday, October 23 at the Dubai International Stadium in Dubai. Earlier this year, the Caribbean team had reasonable outings at home after they won six out of their 10 T20Is against Australia and South Africa.

But Kieron Pollard and Co. recently slumped to defeats against Pakistan and Afghanistan in the warmups. The Three Lions, on the other hand, lost to India in the first warm-up game, but came back to beat New Zealand. It’s pertinent to note that England have never beaten West Indies in T20 World Cups.

The pitch in Dubai is expected to be a good for batting. A fairly high-scoring game seems to be on the cards for Saturday. As seen in the IPL, the track helped the chasing teams and hence, batting second should be the way forward for teams.

Jos Buttler has looked in impressive touch of late. In the first warm-up game, he raced away to a 13-ball 18 with three fours before Mohammed Shami rattled his woodwork. In the second game, Buttler came into his own. Opening the batting, the right-hander notched 73 runs off 51 balls with 11 fours and two sixes. He played at an impressive strike rate of 143.14.

Hayden Walsh Jr. has been stupendous for the West Indies in the last 12 months or so. He didn’t get to play a lot in the series against South Africa, but picked up wickets in heaps against the Aussies. He made sure that the Australian batters weren’t allowed to get away in the middle overs. In the two warm-up games, the leg-spinner picked up three wickets. 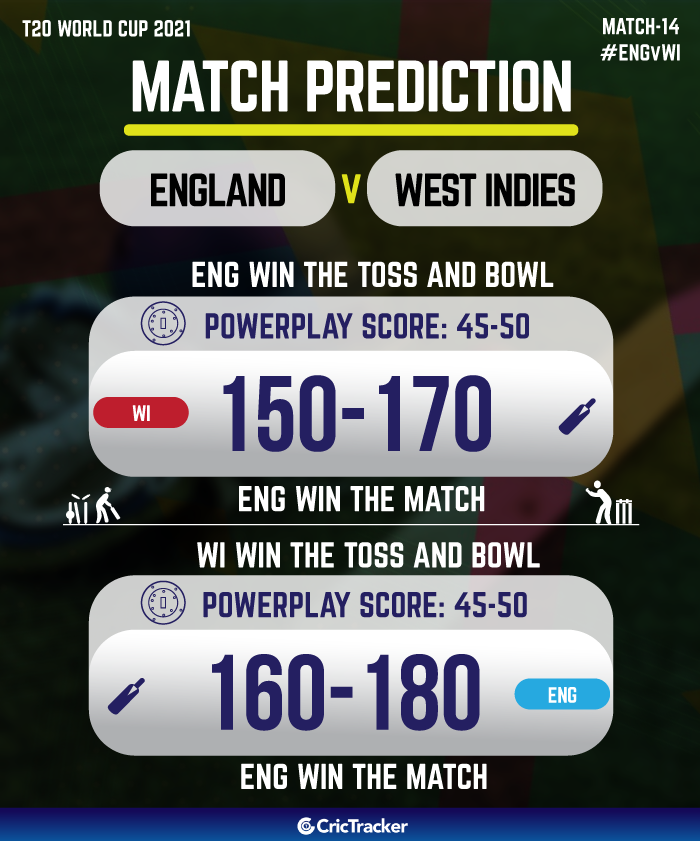