In the previous five encounters, Brisbane have emerged victorious on four occasions.

Monstrous sixes, exemplary spells and stunning catches- The Big Bash League is back to enthral its audience from December 17. The first match of the Big Bash League will be played between Brisbane Heat and Sydney Thunder at Brisbane. Chris Lynn, who was in sensational form in the recently-concluded Abu Dhabi T10 League, will be eager to lead his side Brisbane Heat from the front.

Lynn is also expected to gather many bids in the upcoming IPL 2020 Auction considering his recent form. The right-hander has scored three half-centuries in his last five matches. Lynn will be joined by young duo Tom Banton and Max Briant. However, they will be missing the services of Marnus Labuschagne and Joe Burns. Lynn and Banton are expected to open the innings for Brisbane.

The Chris Lynn-led side finished fifth in the last season by gathering 13 points from 14 matches. With a formidable batting force, Brisbane will be expecting much better performance this season.

Thunder also had a similar outing as Brisbane Heat in the last season. Sydney Thunder also managed to gather 13 points in the previous season by winning six games. Thunder’s batting line-up will be bolstered by the likes of Alex Hales, Usman Khawaja and Callum Ferguson. Ferguson has been in phenomenal form and has smashed three tons in his last five matches for South Australia. Thunder also have an English top-order batsman in their arsenal- Alex Hales.

Thunder have the advantage of two bowling all-rounders in their squad. Dan Sams and Chris Green are expected to contribute to both the departments. However, Brisbane will have a slight advantage over Thunder. In the previous five encounters, Brisbane have emerged victorious on four occasions.

There are no chances of rain to intervene in the match. The weather is expected to be sunny with the temperature hovering around 25 degrees Celcius. The team winning the toss will be looking forward to chasing. The wicket is expected to assist pace bowlers with its bounce.

Brisbane Heat have one of the strongest batting forces in the league. Chris Lynn, Tom Banton and Max Bryant will be eager to propel their side to a great start. The trio will be coupled by all-rounder Ben Cutting, who also has the potential to deliver match-winning performances. Josh Lalor had delivered impressive spells in his previous season for Heat. The left-armer has scalped 17 wickets in his last eight matches for Heat.

Alex Hales has been in sublime touch since the past couple of matches. While playing for Durban Heat in MSL 2019, the English batsman played a brilliant unbeaten knock of 97 runs in his previous match. Callum Ferguson will also be hoping to carry on his run-scoring spree. Chris Green, who delivered impressive spells in the Abu Dhabi T10 League, is expected to contribute in both the departments alongside Dan Sams. 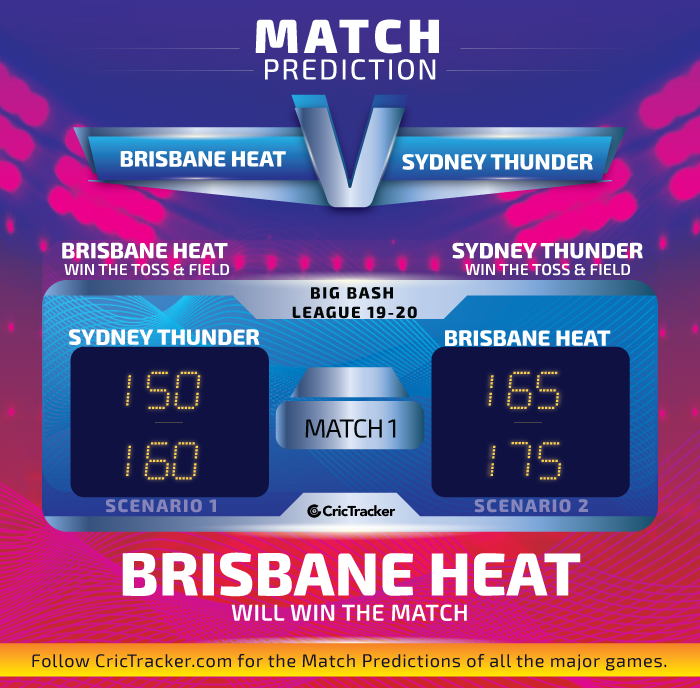