Shoaib Malik and Andre Russell have proven their worth with bat and ball throughout the tournament.

The final of the Bangladesh Premier League (BPL) 2019-20 will be played between Khulna Tigers and Rajshahi Royals at the Sher-e-Bangla Stadium in Dhaka.

So, here we are! After six weeks of pulsating, accelerating, sometimes gobsmacking and 0n occasions controversial state of affairs, we are finally down to the grand finale of the Bangabandhu BPL where Khulna Tigers and Rajashahi Royals will battle it out for the rights to be called the champions of the 2019-20 edition.

Khulna Tigers booked their place into the summit clash after registering a 27-run win over Rajshahi Royals- the same opponent that they’ll face on Friday. The win was set-up by a whirlwind knock of 78 by Nazmul Hossain Shanto, one that helped them to post a total of 3-158.

But the final nail in the coffin was nailed by Mohammad Amir’s 6-17, one that proceeded to run through the Royals, even as Shoaib Malik [80] waged a lone battle at the other hand.

The Royals’ struggles with the bat continued in the second qualifier. Barring Irfan Sukkur [45], none of the top-order batsmen could post any substantial score during their run-chase of 165 and it took an insane inning from Andre Russell, who racked up a whirlwind 22-ball 54 to take them past the finishing line.

It is expected to be a bright and sunny day in Dhaka on Thursday. According to the weather report, Dhaka is set to have bright spells of sunshine throughout the day. While the temperature is set to be between 16 and 26 degrees Celsius, the humidity is set to hover around 69%. There is no chance of rain.

The pitch at the Sher-e-Bangla Stadium has provided a perfect balance between bat and ball. But in the last few games, chasing has become difficult due to the slowness of the pitch and both the sides will be looking to defend on the night of the final.

Average first innings score:– 166 [In the last five  games at the venue this season]

(Will be shared if there’s any update)

Khulna Tigers- 115 and 78- These have been Nazmul Hossain Shanto’s scores in the last two games. How he and Tigers will hope he does an encore on the grand finale. Apart from Shanto, Rilee Rossow and Mushfiqur Rahim will be the key.

Mohammad Amir ran through the Royals during his spell of 6-17. He will once again spearhead the bowling unit while Robbie Frylinck and Mehidy Hasan could prove to be the X-factors.

Rajshahi Royals-  The reason behind the batting struggles of Rajshahi Royals in the past two games has been the misfiring opening unit of Liton Das and Afif Hossain, and they’ll hope that the duo can step-up on the big day. Shoaib Malik and Andre Russell will be the absolute key to their fortunes with both bat and ball. 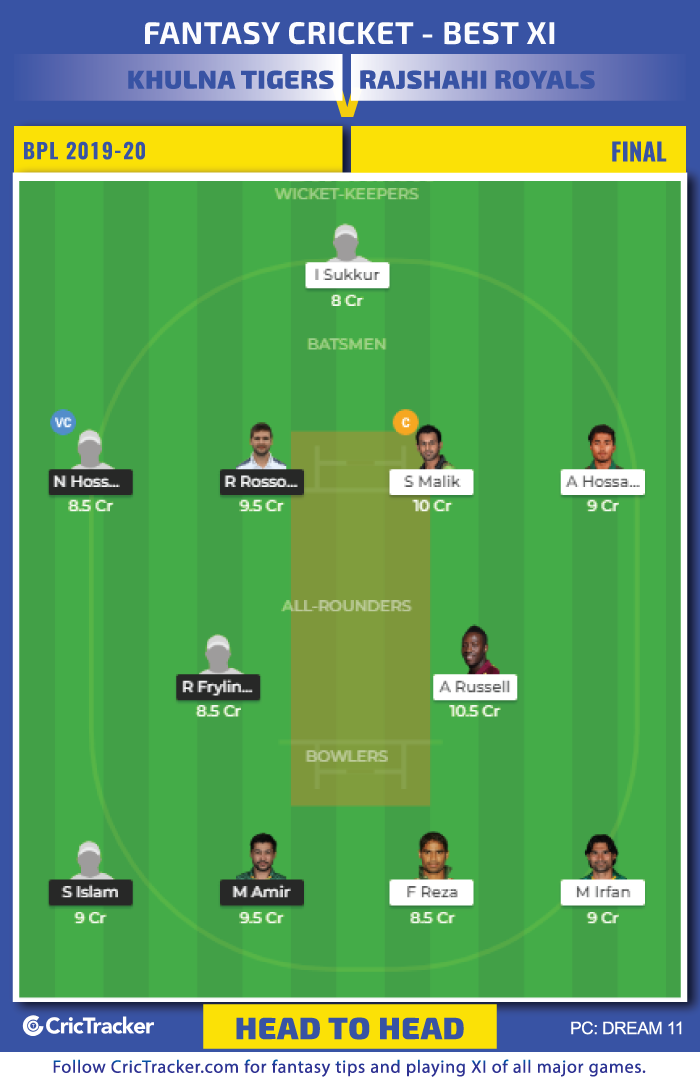 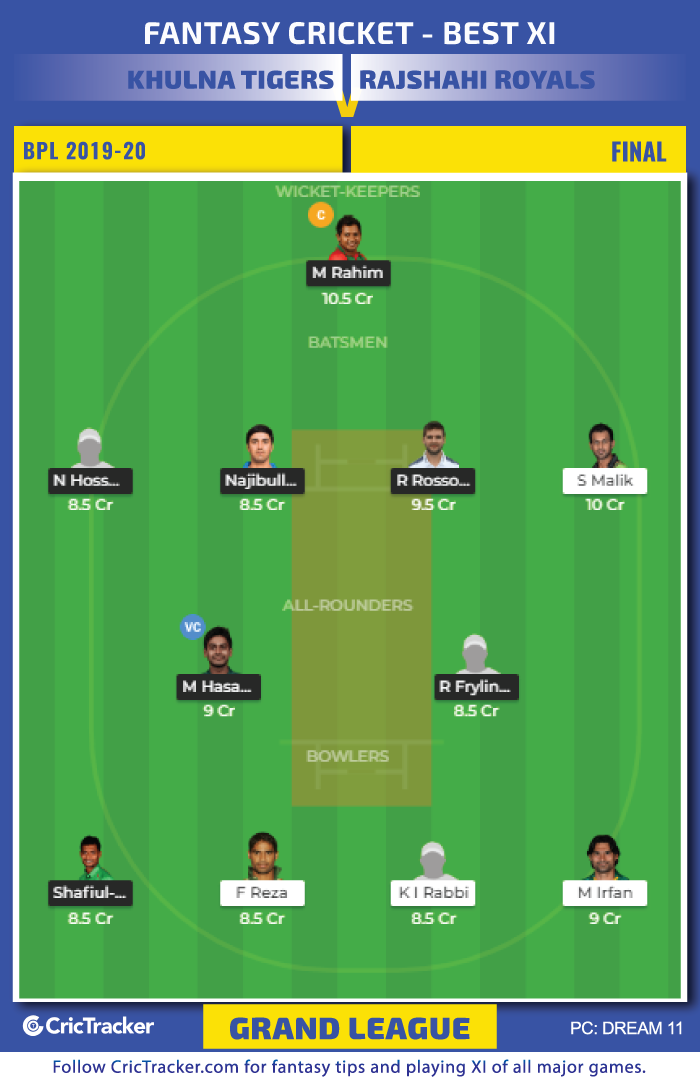 Shoaib Malik and Andre Russell have proven their worth with bat and ball throughout the tournament. On the other hand, Nazmul Shanto and Mohammad Amir have been brilliant for Khulna Tigers. So can pick them as C or VC in your Dream11 Fantasy team.

Khulna Tigers are expected to be crowned the champions.