The Kings ended as the table-toppers while the Gladiators huffed and puffed their way to the next round.

After 20 jaw-dropping matches in the league stage, the 2020 edition of the Lanka Premier League is set for the semi-finals. In the first match on December 13, Colombo Kings and Galle Gladiators are set to lock horns at the Mahinda Rajapaksha Stadium in Hambantota.

The Kings had a couple of poor outings, but six wins from eight matches meant that they finished on top of the points table. The Gladiators, on the other hand, lost five matches to start their campaign. However, two victories in their final three matches made sure that they edge the Kandy Tuskers out.

The fact that they beat the Tuskers by nine wickets would give them a whole lot of confidence. Bhanuka Rajapaksha and Co could also take heart from their eight-wicket win over Angelo Mathews’ Kings in the first round.

The pitch in Hambantota has been a batsman’s paradise thus far. The first round was a witness to quite a few scores over the 200-run mark. The track in Sunday’s game isn’t expected to be much different by any means.

In a pressure game, teams should look to set a target and then put pressure on the opposition batting. There will be a 20 per cent chance of rain during game-time with quite a bit of cloud cover.

Playing Combinations for COL vs GAL

Laurie Evans has had a stupendous campaign in the LPL 2020. He has played eight matches in which he has notched 289 runs at an average and strike-rate of 57.80 and 170 respectively.

The unbeaten 108 he smashed against the Dambulla Viiking in their Kings’ previous game would give him a lot of confidence. Colombo would be hoping for their premier batsman to again fire all guns blazing.

Danushka Gunathilaka has arguably been the standout batsman in the ongoing tournament. In eight matches, he has hammered a stunning 462 runs at an average and strike-rate of 77 and 144.82 respectively.

It’s primarily because of him that the Gladiators, somehow, made their way through to the semis. Having scored four half-centuries, he has to again step up and deliver for his team. 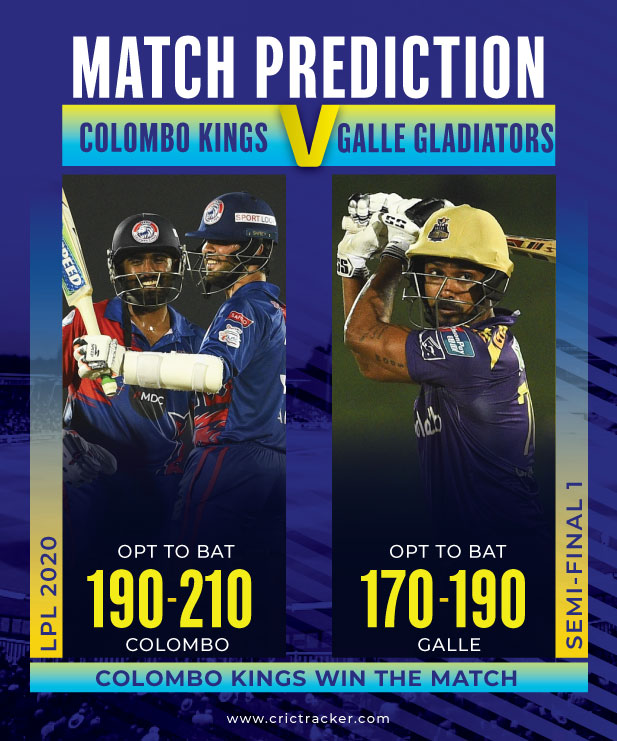