Nadine de Klerk will be a safe option as a multiplier as she bats in top four and is bowling 3 overs at least.

The 5th game of the 6-match T20I series between India Women and South Africa Women will be played at the Lalabhai Contractor Stadium in Surat.

This match will be live on Star Sports 1 HD and Star Sports 3. Live streaming available on Hotstar.

South Africa Women suffered back to back losses in the T20I series against India Women. The series was planned to be a 5-match affair but was extended to a 6-match T20I series. The consistent rains in Surat ensured the scheduled 2nd and 3rd T20I got abandoned. Both the teams decided to play an extra game a day before the last match of the series on October 3 (Thursday).

The first match of the series was unaffected by the rain and India sneaked in an 11-run win while defending their total of 130/8. The home team came up with a much better performance in the 4th T20I which was reduced to 17 overs aside. India Women posted 140/4 in the restricted 17 overs. In the reply, the Protea Women could only make 89/7.

Clear weather is forecasted for Thursday in Surat from the afternoon. The chances of a full game depend upon the amount of rain that the ground has survived over the last 24 hours heading into the game. The venue facilities are not that great which is there was a delay on Tuesday.

The Lalabhai Contractor Stadium looked dry in both the completed matches in this series. The pitch was ideal for the slow bowlers as the ball was keeping quite low. There was a sharp turn for the spinners and the ground history insists the same. The pitch won’t quicken up with the dew and it needs some moisture produced through continuous rains to settle down.

Shafali Verma will be hoping to make a big one if she gets starts like in the previous match. Mignon du Preez is bankable due to her form which she is carrying from KSL. Jemimah Rodrigues is the safest option among batters in this series. The strike rate of Radha Yadav and Poonam Yadav with the ball will be a crucial factor in the coming game.

Nadine de Klerk will be a safe option as a multiplier as she bats in top four and is bowling 3 overs at least. 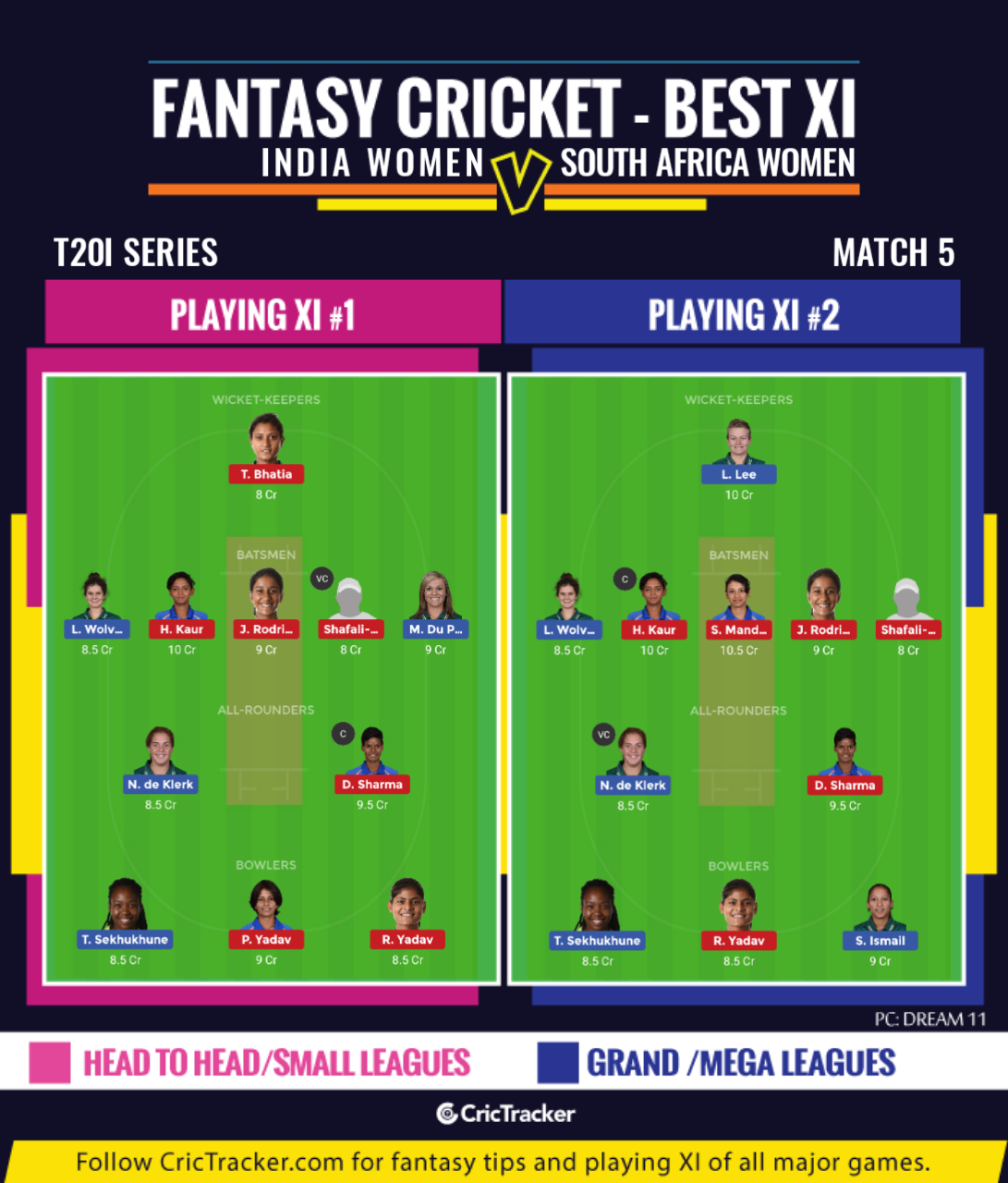 Smriti Mandhana’s best comes out when there is pace in the track which is why she has exceptional records in England and Australia. Playing on slower tracks isn’t her strength and that was witnessed during the previous match. This makes her not being compulsory in the fantasy team at least for this series.

India Women are expected to take a 3-0 lead in the series.