Kulwant Khelroliya might come in for Umesh Yadav to steer the RCB to victory.

Scored 200 plus against KKR and lost, Virat Kohli hammered a ton, again scoring 200 plus against KKR and won, made comeback after losing six matches on the trot and then registering three straight wins. This is how RCB sparkled in dark this season. On Sunday, the Bangalore side lost to Delhi Capitals. With every loss, their chances of getting into Playoffs became meagre. Winning only 4 of 12 matches, they are still not done with the Playoffs race. Kohli men still have chances to make Playoffs but it’s like the hoping for the final thread to not break. On Tuesday, there will be a clash between two last bottom-placed team — Royal Challengers Bangalore and Rajasthan Royals.

Rajasthan Royals won five matches so are they standing on the 7th spot. It was a good show for Royals in the last two matches as they won. But, again Kohli’s men were troubled by Delhi colts. RR defeated two strong teams SRH and KKR in the last two matches. Incidentally, both the teams were lost to Delhi Capitals last. The Bangalore side will have the advantage of home ground. Rajasthan Royals defeated Bangalore in the former’s den. Will they avenge the loss at M Chinnaswamy Stadium?

In a crucial clash, Royal Challengers after losing a match, they would look to tinker a bit. In the last match, Kohli brought in Washington Sundar, Shivam Dube, Heinrich Klaasen and Gurkeerat Singh. Now he might look to replace Umesh Yadav with Kulwant Khejroliya. Parthiv Patel and Virat Kohli were good on the top. Well, of the newcomers, Klaasen should break into the spotlight as he failed to meet the expectations in the previous match.

Rajasthan Royals look good to go as they won 2 matches on the trot. And there was no much changes in those matches. With the bowling department wreaked havoc in their previous match. Also, the top order being in full form as Sanju Samson missed half-ton by a whisker while Liam Livingstone and Ajinkya Rahane played second fiddle to guide their team to a win. The team expect the same show against RCB on Tuesday.

Toss: Rajasthan Royals won the toss and opted to field. 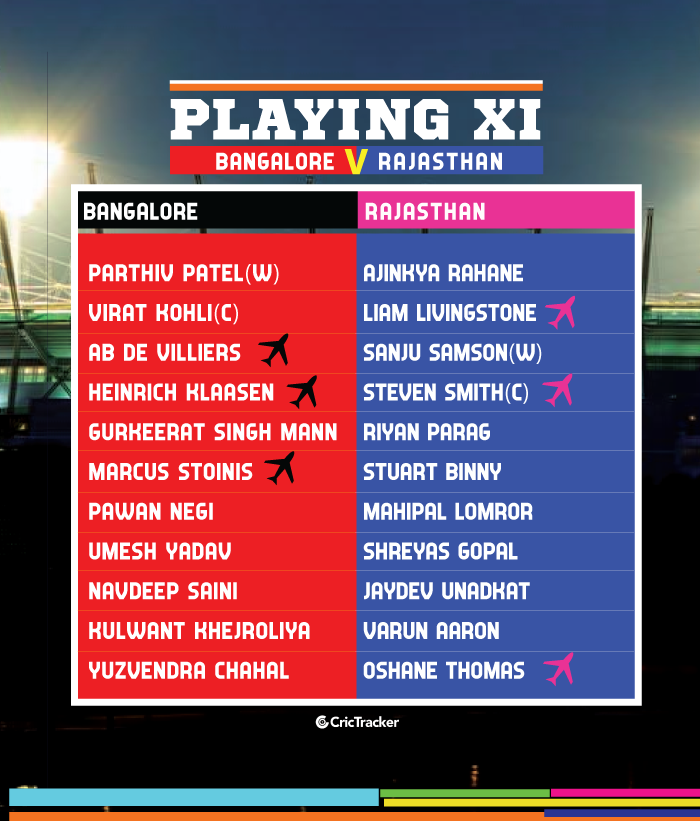 If there is anyone who is need of the hour for Royal Challengers Bangalore, it is Virat Kohli. Kohli has been displaying a bad show since he scored a century against KKR. The three innings he played were in the lowlight. After scoring 100 his scores read 9, 13 and 23 and now playing a crucial match, it is important for the skipper to step up. At home, he scored three big innings but nothing was in winning cause. Now, can he lead the team to win and keep up the meagre chances of making Playoffs.

It is wondering to hear that cricket is no more a batsman dominated game. Bowlers have spread blanket domination over the spot in the last couple of years. Shreyas Gopal from Rajasthan Royals has been outstanding this year so far by picking 15 wickets. If the luck favours and Royals make it to Playoffs, it will be mainly because of bowlers. One of the strongest pillars is Shreyas. Also, he is the highest wicket-taker for the Rajasthan unit. Chinnaswamy being a flat pitch, it is important for Shreyas to maintain a good economy.

3: Rajasthan Royals won all the 3 matches since 2018 against Royal Challengers Bangalore.