Rajasthan Royals will play three games in this round while Sunrisers Hyderabad plays only one.

The third round of the Indian Premier League (IPL) official championship fantasy league had a couple of low scoring matches with the bowlers coming into the equation. KL Rahul stood out during this round as expected. He struck fifty-plus scores in all three games played by Kings XI Punjab during the third round. The coming fourth round will be a crucial one with respect to the chances of teams who are expected to give their best.

Round 4 schedule – Rajasthan Royals will play three matches while Sunrisers Hyderabad plays only one game. All the remaining six teams will play two matches apiece.

With Jos Buttler going to play three matches in this round, he and KL Rahul will be a must among wicket-keepers. Rahul has scored the fifties in all the three matches during the 3rd round. There is a less chance of picking outside these two given the duo will be opening the innings. Rishabh Pant hasn’t been consistent yet while Jonny Bairstow has only one game during this round.

Robin Uthappa and Faf du Plessis have shown enough intent to be picked for this round as the first preferred batsmen. The duo of Kohli and De Villiers will get to play against their favourite opponents KXIP and MI but away from home. RCB’s chances in this IPL rely on performances of these two players in these two games. It will not be possible to stop Rohit if he returns fit for the games against RR and RCB. Both the games could be played on a belter at the Wankhede like during the game against KXIP. Due to high pricing, only one of these three can be picked.

Andre Russell was the top performer for KKR in two of the three matches he played in the 3rd round. Hardik Pandya was decent with bat and ball across the two games. The duo will be the first preferred from the all-rounders category. Sam Curran is expected to open the innings in case of fitness issues for Chris Gayle. The Universe boss was seen struggling with his back during the game against MI.

The Sunrisers bowlers can be ignored as they have only one match to play. Harbhajan Singh and Rahul Chahar have been bowling beautifully and could well pick up a few wickets in this round. Both the bowlers cost only 7 credits. Picking them could give more available credits for other categories.

Jos Buttler is expected to be the top performer in this round as he will be playing an extra game. He should either be the captain or vice-captain for this round. KL Rahul, Andre Russell and Hardik Pandya will be among first preferred vice-captain options. Shreyas Gopal can also be picked up as vice-captain. The trio of Kohli, ABD and Rohit can also be considered as they are looking for big knocks.

The game between KKR and DC on Friday in Kolkata and MI-RCB game on Monday will be ideal choices for Free Hits during this round. The Free Hit booster multiplies the fantasy points in a game by two times. This is currently available only on official fantasy site. 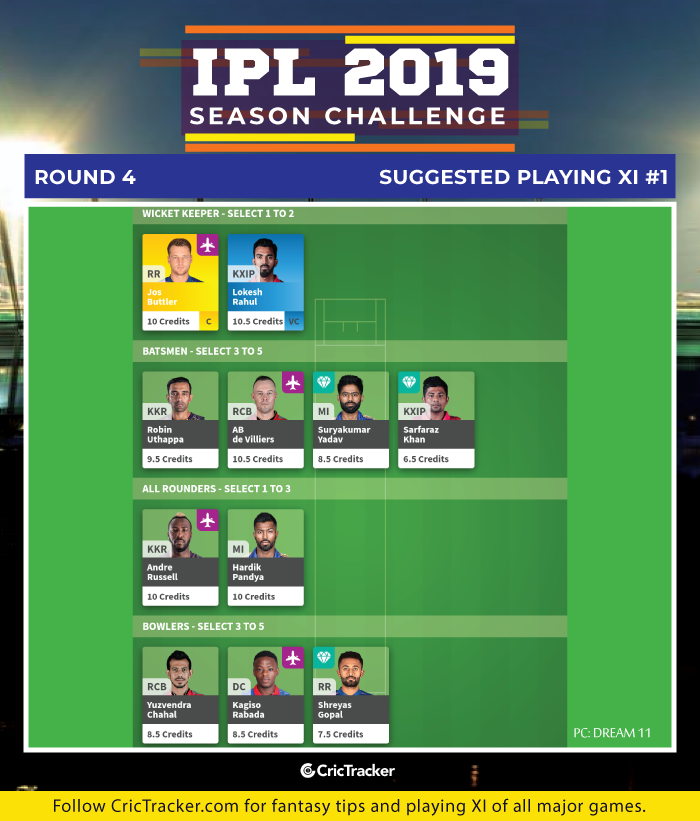 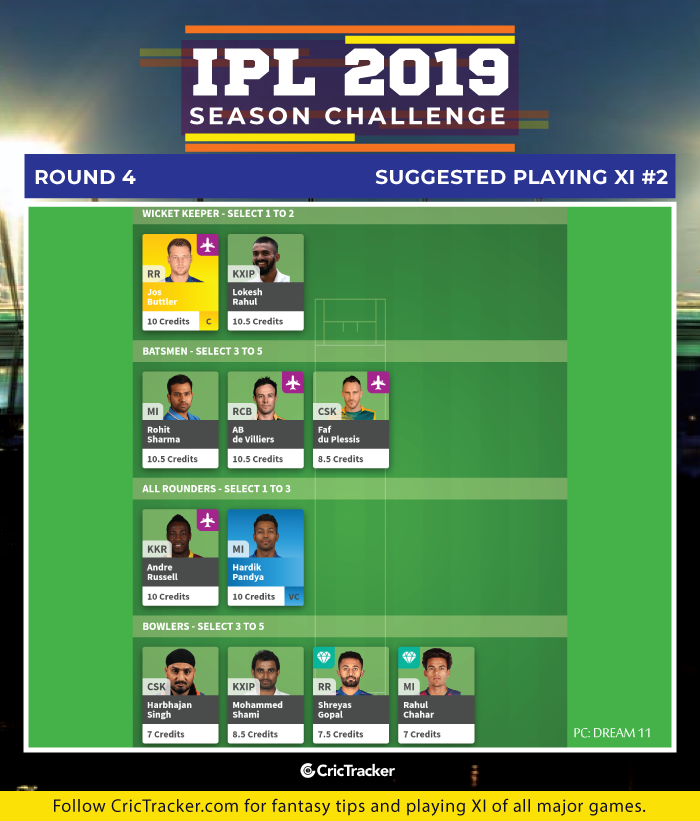