Mumbai Indians will play the first and last league match of the season.

Year after year, the expectations from Mumbai Indians (MI) keep rising. One of the reasons for that is they keep raising their game and keep collecting IPL titles for fun. In fact, they are the most successful team in the history of the Indian Premier League (IPL).

They might fail to make it to the top four in an odd season here and there but no other team has won more IPLs than MI’s four (2013, 2015, 2017, 2019). They have shown that they can make a comeback even if they start slowly and are down and out. MI have done that multiple times and they can never be ruled out.

The four-time champions have a solid core led by Rohit Sharma. They have almost all bases covered and have great depth in their squad as well. Thus, they bought just six players in the IPL auction for the 2020 season. Nathan Coulter-Nile and Chris Lynn were their biggest picks as the Aussie duo try to fill in the void in the 24-man squad who look to become the second team to defend their IPL title successfully.

MI to host CSK in the season opener

The 13th edition of the IPL starts with a Mumbai game since they won last year’s IPL. Thus, it will be a repeat of the 2019 IPL final as Mumbai Indians (MI) take on arch-rivals Chennai Super Kings (CSK) on the 29th of March at the Wankhede Stadium in Mumbai. They travel to Hyderabad a couple of days later before hosting Royal Challengers Bangalore (RCB) at home on the 5th of April.

The defending champions then have a string of away and home games clubbed together. They go to Mohali and Kolkata on April 8th and 12th respectively before returning to the shores of Mumbai where they will play four out of the five games in the second half of April.

However, they finish the tournament with a string of away games. Their last home game will be on the 9th of May as they play three out of their last four games away from home. MI who start the league stages will also play the last and 56th game, which will be against RCB at the M Chinnaswamy Stadium in Bengaluru. 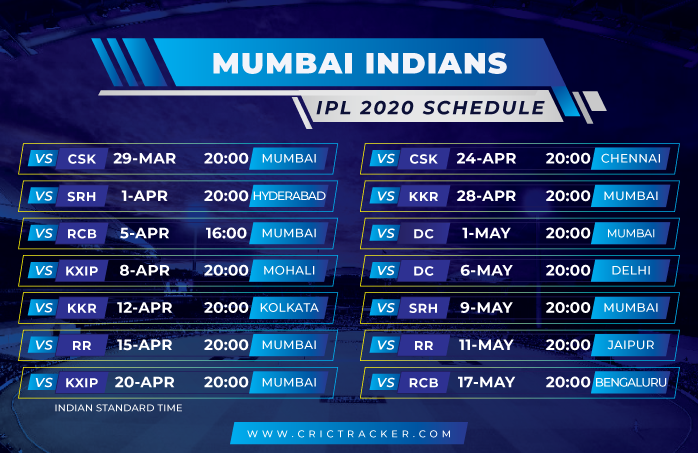