Manish Pandey's knock was a game-changing one during RR vs SRH.

Sunrisers Hyderabad took almost two weeks for moving to eight points from six as they thumped the Rajasthan Royals by 8 wickets in Dubai. The victory during RR vs SRH will go down as a special one in the history of Sunrisers. The franchise, well known to witness the domination by the overseas batsmen, saw two Indian scoring unbeaten fifties. Jofra Archer’s spell with the new ball consumed both David Warner and Jonny Bairstow but the chase of 155 was a lot easier than expected from thereon.

The main reason for the big win of SRH during the RR vs SRH game was Manish Pandey and his aggressive display with the bat from as early as 4th over. Pandey smashed an unbeaten 83 from only 47 balls with help of eight sixes and four fours. As many as four maximums were hit by the Karnataka batsman during the powerplay overs itself. Pandey raced to a fifty in only 28 balls and end up adding 140 runs for the 3rd wicket in only 93 balls with Vijay Shankar. The all-rounder gave much-needed support to Manish by scoring an unbeaten 51-ball 52. 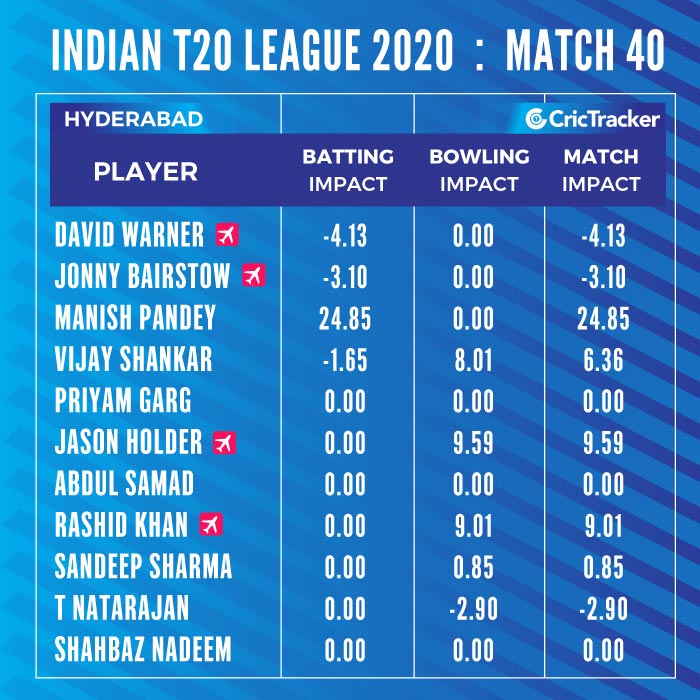 Manish Pandey was named player of the match for his unbeaten knock and also earned the highest impact rating during the RR vs SRH. Manish’s knock earned him an impact of +24.85 as per CricTracker’s Match Impact Ratings. No other SRH player even earned a match impact of +10 during this win. Jason Holder, playing his first match of the season, claimed three wickets alongside conceding only 33 runs. Holder’s bowling performance helped him earn an impact of +9.59; the highest among the SRH bowlers.

Rashid Khan’s tight spell of 4-0-20-1 earned a bowling impact of +9.01 which is next to that of Holder. Jofra Archer was the star performer for the Rajasthan Royals with his all-round efforts. Jofra scored 16 from only seven balls before registering figures of 4-0-21-2 by dismissing David Warner and Jonny Bairstow. He earned a match impact of +18.49 which is only next to Manish during RR vs SRH. Ben Stokes, on the other hand, ended with a negative impact -17.03 due to his poor all-round efforts. 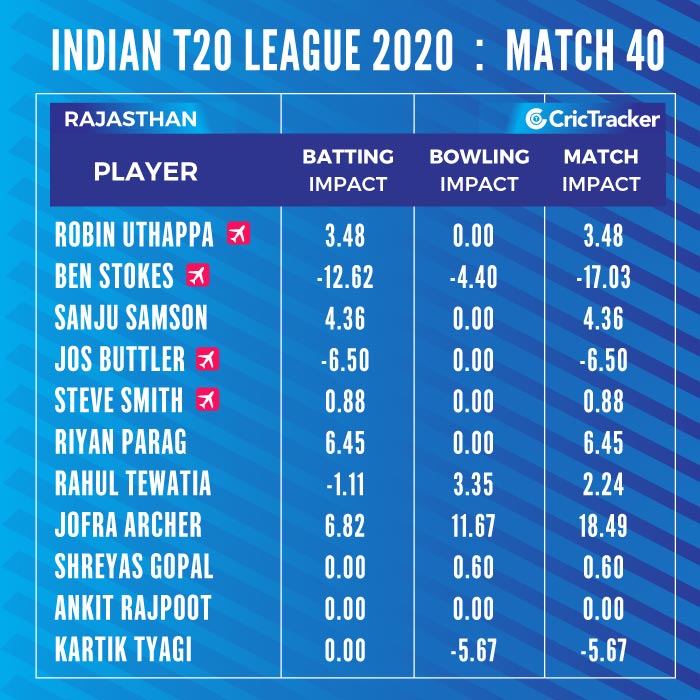