Alex Hales is unavailable for the rest of the tournament.

Islamabad United will be up against Peshawar Zalmi in the 24th match of the PSL 2022 on Thursday. It’s a crucial game for both sides in the context of the tournament as they are aiming to cement their spot in the playoffs. Islamabad United won a dramatic game against Karachi Kings by a mere one run on Monday and registered their 4th win in this tournament. They will miss the services of skipper Shadab Khan and Zeeshan Zameer against Zalmi due to injury.

Peshawar Zalmi on the other hand, are coming into this match on the back of two consecutive wins against Quetta Gladiators and Karachi Kings. They placed themselves at the 4th spot in the standings with 8 points.

The batters are finding it easy to score runs on this wicket and even the bowlers had their chances as well. The team’s batting first will have more than 70 percent chance of winning this match.

Asif Ali is a reliable batter for Islamabad United in the middle, he might bat up the order in the absence of Shadab Khan. So far in this tournament, he has scored 73 runs and picked up 2 wickets.

Shoaib Malik is still scoring runs with a lot of ease at the age of 40. He is the top run-getter for Peshawar Zalmi in this tournament with 276 runs in 8 matches and even picked up 2 wickets as well.

Faheem Ashraf had a reasonable tournament so far, in 7 matches, he has scalped 2 wickets and scored 91 runs in 5 innings.

Liam Livingstone is yet to show his big-hitting abilities in this tournament. In 3 matches he has scored 30 runs and picked up 2 wickets with the ball.

Waqas Maqsood has scalped 9 wickets in 4 matches in this tournament at an economy of 8.18 with the best figures of 4 for 35.

Salman Irshad has picked up 9 wickets which is the most for Zalmi in this PSL. He is a clever bowler and a good pick for your fantasy teams.

ISL vs PES Must Picks for Dream11 Fantasy Cricket: 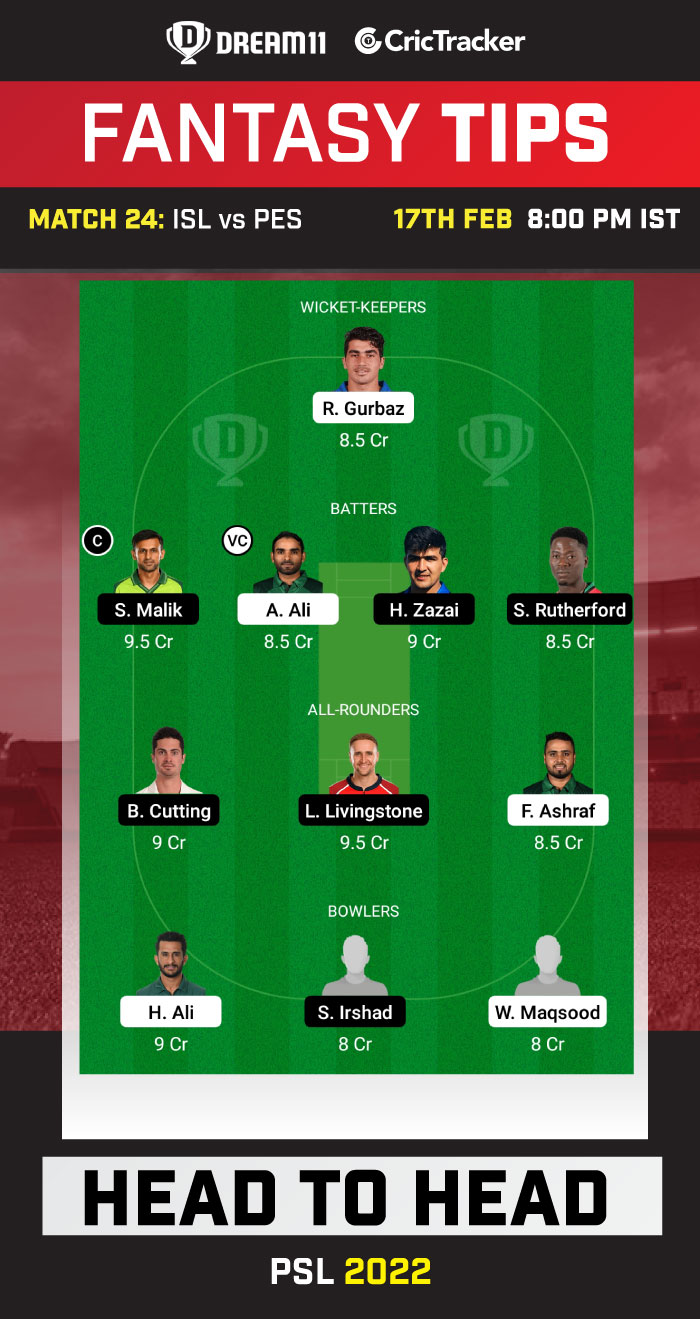 Hazratullah Zazai has smashed 137 runs in 5 matches in this tournament at an average of 27.4. He is a risky captaincy pick for your fantasy teams.

Wahab Riaz has picked up only 5 wickets in this tournament at an economy of 9.33. It’s better to avoid him while making your fantasy teams.