The 7th match of the Marsh One-Day Cup 2019 will be played between Victoria and Queensland at the Junction Oval in Melbourne.

This game will be live on Fox Sports in Australia and can be streamed on Cricket Australia portal in India.

Queensland is set for their first away match of the season as they tour Melbourne to face Victoria at the Junction Oval. The Queensland team started their season with back to back wins while chasing at the Allan Border Field. An already strengthened side will be boosted with the inclusion of Usman Khawaja and Ben Cutting. Khawaja, who had poor outings in the Ashes, will be leading the Queensland side.

Both Khawaja and Cutting went missing from One-Day Cup in 2018/19 due to their commitments to Australian Test side and T20 leagues respectively. Victoria, on the other hand, suffered a huge defeat against the Western Australia team in the tournament opener. They were lucky enough to beat Tasmania in the 2nd game by 1 run. Tasmania lost last five wickets for four runs while aiming for a bonus point.

Junction Oval is expected to be clear on Sunday without major rain threats. There will be cloud covering for a brief time during the match. We could witness showers towards the end of the game but those chances are too less.

Junction Oval hosted four matches in the previous One-Day Cup. It was the first time it has hosted the competition after 13 years. Anything under 250 by the teams batting first could be easy to chase. However, 260+ targets might be tricky given the help spinners get.

41, 138, 81 and 85 – These are Usman Khawaja’s last four innings in the One-Day Cup. In the List A games for Queensland, Khawaja has scored 1749 runs at an average of 60.31. In the 30 innings, he has struck four hundreds and scored 11 fifties. Glenn Maxwell had great outings during the previous One-Day Cup and is continuing the same this time as well.

Sam Heazlett has scored back to back fifties this season. He was among the top run-getters in the previous edition. Will Sutherland conceded a ton with the ball in the first game. But he bounced back by scoring a fifty down the order and also claimed a couple of wickets.

Ben Cutting scored 249 runs at an average of 124.5 and a strike rate of 194.5 across the three premier one-day tournament matches. He is in good form with both bat and ball in the T20 league he played recently. 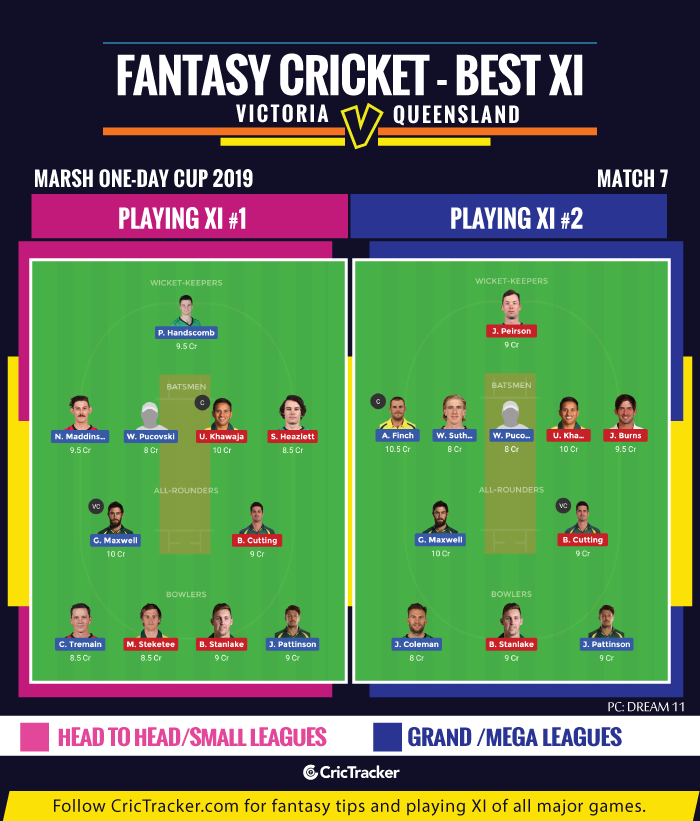 With the inclusion of big names in both the sides, there will be uncertainty over the playing XIs. If we end up picking top players who are sure of playing this match, we might run out of credits. As a result, we have to take bit of risks like including Will Pucovski, Will Sutherland and Jackson Coleman who cost only 8 credits apiece. One of these three might not make it to the XI if Victoria decides to include Matt Short to use him as a spin-bowling option.

Queensland looks well balanced in all departments and could register their 3rd consecutive win.