After a fantastic outing in the group stages, Nottinghamshire are expected to outplay Leicestershire in the quarter-finals.

Nottinghamshire will take on Leicestershire in the 1st Quarter Final of the T20 Blast at Trent Bridge, Nottingham, on Thursday.

Going into the knockout stages of the 2020 edition of T20 Blast, Nottinghamshire are one of the favourites to win the title. They have shown excellent consistency and dominance in the group stages. With 7 wins out of 10 games, they topped the table in North Group.

Their quarter-final opposition is fellow North Group team Leicestershire. The Foxes won only 4 of their 10 games, and were indeed lucky to make it through to this stage. However, one of those four wins was against Nottinghamshire, hence it might be a cracker of a contest.

NOT vs LEI Weather Report for Quarterfinal 1:

The sky over Trent Bridge will be cloudy, and there is also a possibility of light drizzle. The temperate is expected to be around 13 °C.

The Trent Bridge pitch is fairly neutral, but the batsmen might be slightly on the better side in terms of support. Anything over 160 should be competitive.

NOT vs LEI Top Picks for Today’s 11Wickets Match:

Joe Clarke is the leading run-scorer for Nottinghamshire. He has amassed 316 runs, which includes a scintillating century. He has an average of over 45 and a strike rate of almost 180.

Jake Ball has done with the ball what Clarke has with the bat. He has picked up 14 wickets with an average of less than 15. He also has a healthy economy rate of under 8 runs per over.

Arron Lilley has been very consistent for Leicestershire so far. He has scored 277 runs at an average of almost 35, while his strike rate is over 140.

Ben Duckett has scored 271 runs in 8 games, which includes 3 half-centuries. He has an average of over 45 and a strike rate of over 135.

Suggested Playing XI No.1 for NOT vs LEI 11Wickets Fantasy Cricket: 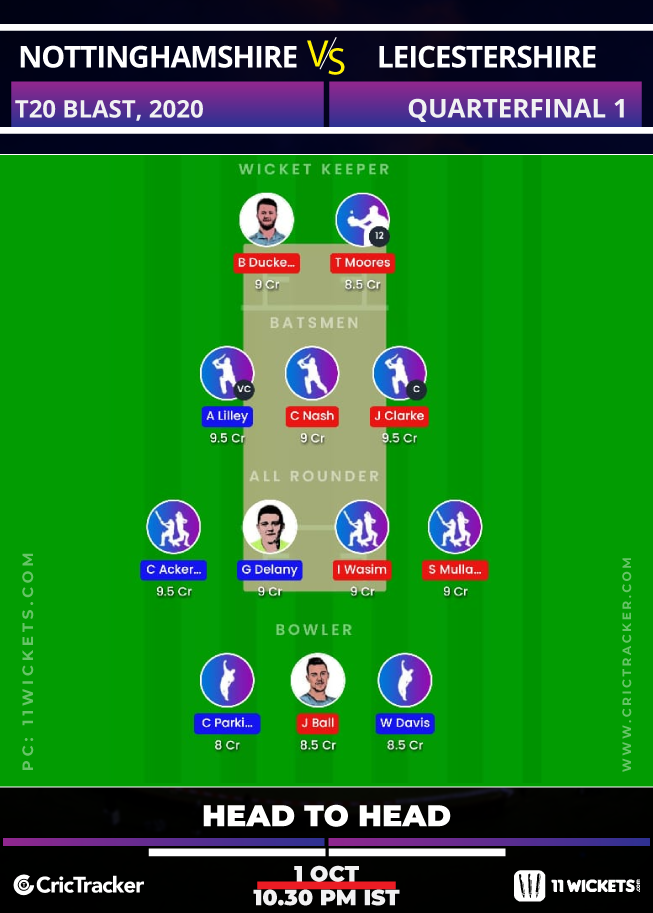 Suggested Playing XI No.2 for NOT vs LEI 11Wickets Fantasy Cricket: 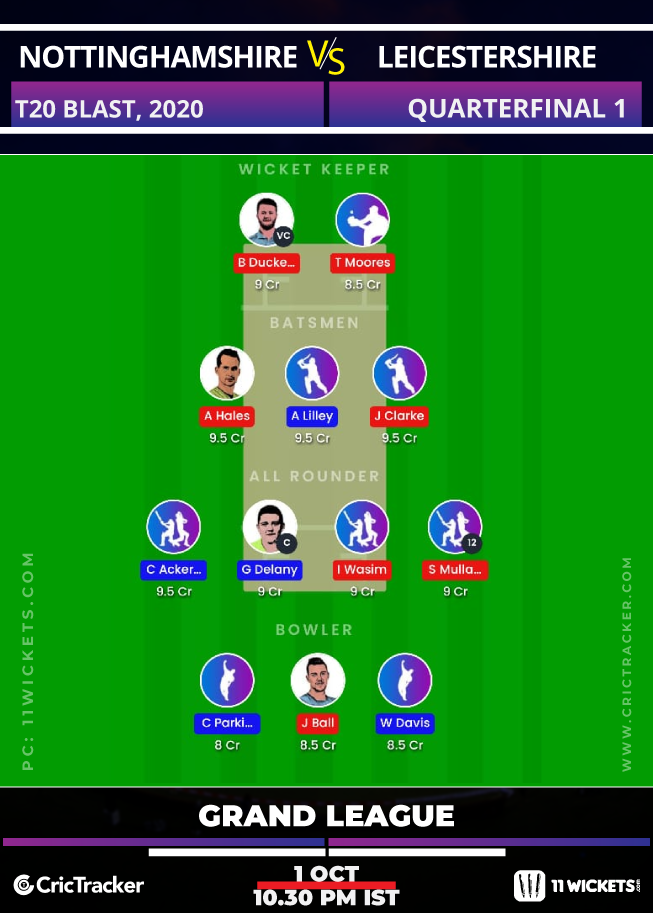 Callum Parkinson has been Leicestershire’s best bowler in this season’s T20 Blast. He has picked up 9 wickets and has also maintained a brilliant economy rate of well under 7 runs per over. He must be included in your 11Wickets fantasy team.

NOT vs LEI Today’s Probable Winners: