Saad Bin Zafar picked up exactly one wicket in all five matches.

The final match of the Qatar T10 League 2019 will be played between Swift Gallopers and Falcon Hunters at the West End Park International Cricket Stadium in Doha.

Swift Gallopers and Falcon Hunters qualify to the final of the Qatar T10 League 2019 after the abandoned semi-finals. Both the teams have got the advantage of finishing in top two positions in the league phase. The Gallopers lost their first match against the Desert Riders but won all the four their played since then. On the other hand, the Falcon Hunters lost their 2nd match of the tournament to Gallopers that too by only six runs. Post that defeat, the Hunters got on to a winning spree. They won their remaining three matches to finish behind the Gallopers.

The West End Park Stadium is forecasted to witness clear weather during the final of the tournament.

The pitch at the West End Park has been quite inconsistent throughout the league phase. However, a fresh track is expected for the finals day. Rain on Sunday could retain a bit of moisture on the pitch but it could get out during the 3rd place play-off match. Hence, the final could be played under extreme batting conditions if everything goes right.

Mughees Bajwa and Zainudheen leading the wicket-takers chart having taken 8 and 6 wickets respectively during the league phase. Salman Butt is 2nd highest run-getter with 119 runs while Mohammad Rizlan occupies the top spot with 131 runs from four games only. Saad Bin Zafar picked up exactly one wicket in all five matches played. Amad Butt took five wickets across last two matches in this tournament. 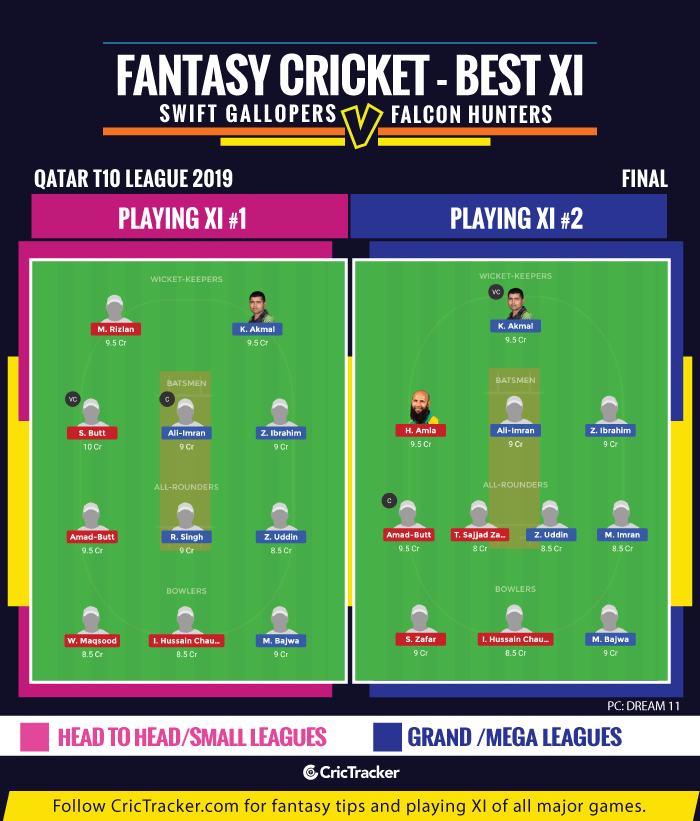 Both Falcon Hunters and Swift Gallopers have been blessed by settled squads which helped in their success. Both the teams are likely to go unchanged from their last match as all those players are available.

Swift Gallopers are expected to win the final and lift the maiden title.