Virat Kohli is a risky captaincy pick for your fantasy teams. 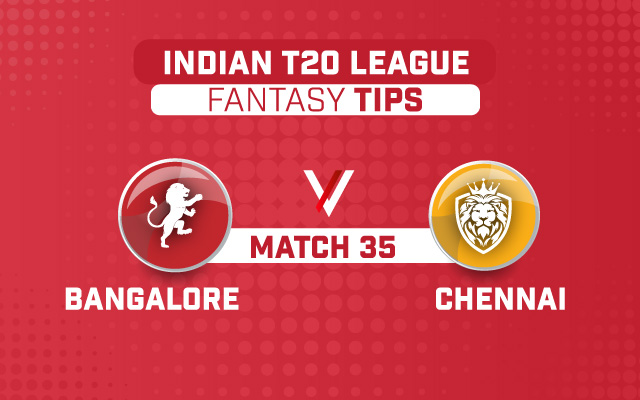 South India’s biggest rivals Royal Challengers Bangalore and Chennai Super Kings will face off each other in the 35th match of the IPL 2021 on Friday. Royal Challengers had a poor last game against KKR where they were bundled out for just 92 runs. They need to move on from the loss and will be playing at a completely different venue compared to their last game. They are still placed at the 3rd spot in the standings with 10 points.

Chennai Super Kings, on the other hand, are ruling this year’s IPL. Despite losing 4 wickets in the powerplay for just 24 runs against Mumbai Indians, they did really well in the latter part of the innings to score 156 runs at the end of 20 overs. Sam Curran who missed the previous game due to quarantine is available for selection. With 6 wins and 2 losses, they placed themselves at 2nd spot in the standings with 12 points.

It’s one of the best batting wickets in the World. The boundaries are way too short on either side of the ground. Even the score of 200 plus is hard to defend here. Bowling first is a good option.

It’s a well-made surface for Glenn Maxwell. He can fancy his chances of scoring big runs here at Sharjah Cricket Stadium. So far in this IPL, he has accumulated 233 runs in 7 innings at an average of 33.28 with the highest score of 78.

Ruturaj Gaikwad played a rescue act in the last game against Mumbai Indians. He showed a great amount of character and remained not out in the end on 88* runs from 58 balls.

'Where has he scored runs in T20s?' - Aakash Chopra doesn't back Shardul Thakur as Hardik Pandya's replacement

Ravindra Jadeja has a fond memory against RCB. He smashed 62* runs from 28 balls in their previous meeting in the 1st leg and even picked up 3 wickets at an economy of 3.25.

Moeen Ali got out for a no score in the last match against Mumbai Indians. England all-rounder has notched 206 runs in 7 matches in this year’s IPL at an average of 29.42 and even picked up 5 wickets at an economy of 6.

Harshal Patel is the purple cap holder in this ongoing IPL. In 8 matches so far, he has picked up 17 wickets at an economy of 9 with the best figures of 5 for 27 and has 47 runs to his name with the bat as well.

Deepak Chahar has picked the most wickets for Chennai Super Kings in this year’s IPL. In 8 matches he has grabbed 10 wickets at an economy of 7.57 with the best figures of 4 for 13.

AB de Villiers will be desperately hungry for the runs. He got out for a first-ball duck in the last match against Kolkata Knight Riders. However, one innings can’t define him. He is still an excellent pick for your fantasy teams.

RCB vs CSK Must Picks for Dream11 Fantasy Cricket:

Virat Kohli has scored over 200 runs in this year’s IPL at an average of 29. You can take a risk and pick him as your fantasy team skipper.

Sam Curran is back, and his inclusion will further add more balance to the CSK unit. You can take a risk and pick him as your fantasy team skipper.

Suresh Raina is losing his charm as the year goes by, he averages 21.16 with the bat in this year’s IPL. It’s better to avoid him while making your fantasy teams.