Pakistan’s successful chase of 184 is the highest by any team in a T20I tournament final.

Pakistan revisited their T20 game after getting knocked out in the league stage of the World T20 2016 since then they’ve won every series in this format. Under the captaincy of the Sarfraz Ahmed, Pakistan recorded a winning streak of nine consecutive T20I series where no other side has won more than five in a succession. On their way to the record, Pakistan thumped Australia in the final of the T20 Tri-Nation series in Zimbabwe.

Chasing a big total of 184, Pakistan lost two wickets in the very first over and saw the return of their skipper Sarfraz as well in the final over of the mandatory powerplay. Fakhar Zaman once again brought out his ‘A’ game in a tournament final scoring a brilliant 91 in just 46 balls to take the game away from the Aussies. The veteran batsman Shoaib Malik batted through scoring an unbeaten 37-ball 43 to see his team cross the line with four balls to spare. 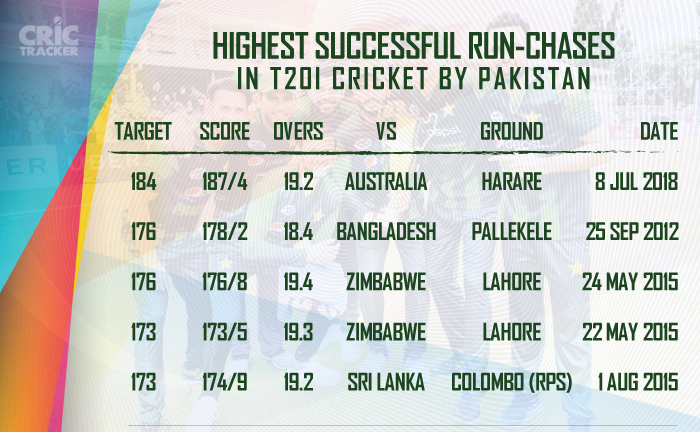 The 184-run chase is the highest successful run-chase by Pakistan in the T20I format. Their previous highest T20I chase was 176 on two different occasions against Bangladesh in the 2012 WT20 game and against Zimbabwe in the 2015 Lahore T20I. Pakistan extended their winning streak while chasing in T20Is to 10 matches with this victory which is a record. No other side has won more than eight T20Is while chasing in a succession.

Pakistan’s successful chase of 184 is also the highest by any team in a T20I tournament final. The previous highest was 167 by India in this year’s Nidahas Trophy final against Bangladesh where Dinesh Karthik hit a six on the last ball to seal the deal. This is overall the 3rd highest successful chase by any team in a T20I knockout game. Windies’ 193 and Australia’ 192 in WT20 semis respectively against India in 2016 and Pakistan in 2010 are the highest chases in T20I knockout matches. 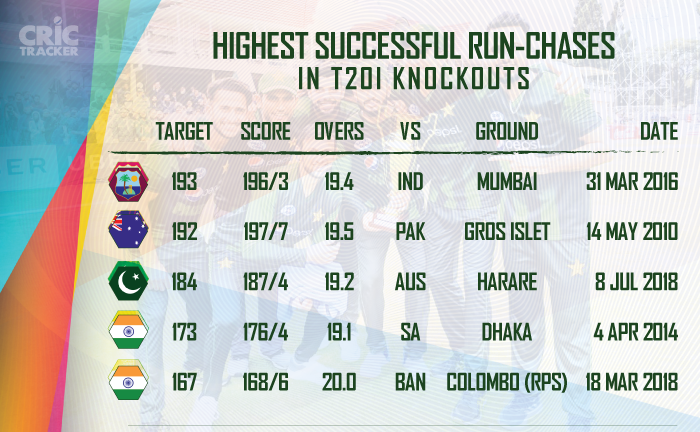