Deepti Sharma is the latest entrant to the list of players with 50 T20I wickets.

Deepti Sharma’s spells with the new ball have been quite crucial for India as she usually picks up the wicket of opposition’s crucial batter or concedes not more than 5-6 runs an over during the field restrictions. However, in the last two matches, Deepti didn’t have expected results as she was hit for three fours in her 2nd over against Bangladesh. The first over of New Zealand Women’s chase bowled by Deepti yielded 12 runs and gave the start that the White Ferns needed in the 134-run chase.

Deepti, who usually bowls 2-3 overs in the powerplay, was removed from the attack after the big over. She was brought back for the 6th over, where he deceived Suzie Bates with a slower one. Bates tried to play a paddle sweep but ended up flicking the stumps through an inside edge. Sharma conceded only 15 runs after the first over and finished with the bowling figures of 4-0-27-1.

The wicket of Suzie Bates was Deepti Sharma’s 50th scalp in the T20I cricket. Interestingly, Deepti’s 50th wicket in the ODI format was also Suzie Bates. The off-spinner got the better off senior New Zealand all-rounder during last year’s ODI match hosted by McLean Park in Napier. With the wicket of Bates at the Junction Oval, Deepti became only the 7th Indian and the 4th Indian Woman to claim 50 wickets in T20Is.

Deepti was only 22 years and 187 days old on Thursday which makes her the 2nd youngest Woman at the time of reaching 50 T20I wickets. Stafanie Taylor was 22 years and 135 days old at the time of the achievement of her milestone. Stafanie and Deepti stand 2nd and 3rd in the list of youngest players to 50 wickets across Men’s and Women’s T20Is. Rashid Khan stands on the top of this chart as he was only 19 years and 256 days old.

Rashid, in fact, is the only player to have picked 50 T20I wickets in Men’s cricket before turning 23. George Dockrell and Mustafizur Rahman celebrated their 23rd with 48 wickets apiece in the shorter format. However, Shahdab Khan is set to stand behind Rashid in this list as he is currently 21 years and 5 months old. Bangladesh Women’s Nahida Akter, who turns 20 next week, has 49 T20I wickets. She is likely to cause a big movement in this list. 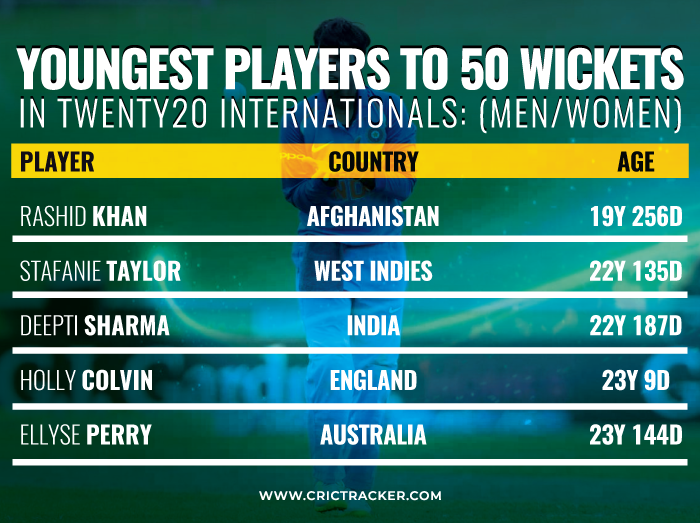