Tamil Nadu might rest a few of their top players having qualified for the knockouts. So it would be better to wait for the toss to take place.

The Round 13 game of the Vijay Hazare Trophy 2019 between Karnataka and Saurashtra will be hosted by the Sawi Mansingh Stadium in Jaipur.

After a heart-breaking four-run loss at the hands of Jammu & Kashmir, Madhya Pradesh will face a strong Tamil Nadu on Saturday in Jaipur. Chasing a paltry total of 183, MP batsmen were left wanting and were bundled out for just 178 in 48 overs. Only Anand Bais batted well for his half-century but he didn’t get enough support from the other end. The bowlers though did their job perfectly.

Tamil Nadu, on the other hand, are enjoying a seven-match winning streak and are looking unstoppable this season. Their skipper Dinesh Karthik has also led from the front with consistent performances and enter this contest as the favourites as well. It remains to be seen if they will go into the knockouts as one of the unbeaten sides.

The forecast in Jaipur at the start of the weekend is absolutely clear. The sun will be out throughout the action in the middle. The temperature will gradually increase from 26 Degrees Celsius to 34 Degrees during the proceedings in the middle according to AccuWeather.

The behaviour of the pitch has consistently changed at the Sawai Mansingh Stadium. Earlier, it was a bat-first surface with the team posting a huge total and then defend it comfortably. But over the last few matches, the team batting first hasn’t been able to post big totals and even score around 250 are being chased easily. The team winning the toss is expected to bowl first going by the recent trend.

Average first innings score: 246 (In 11 matches at the venue this season)

Baba Aparajith has been in scintillating form for Tamil Nadu this season amassing 439 runs in seven innings at an average of 109.75. He is an exceptional captain material in fantasy teams. Vijay Shankar and Dinesh Karthik are also brilliant so far while you can also opt to go for Vijay and Mukund. 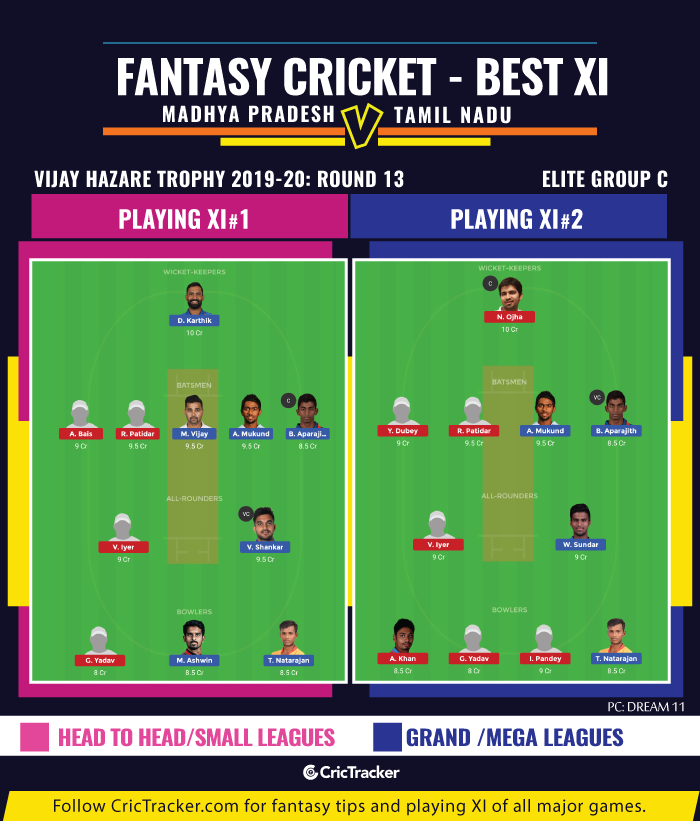 Ishwar Pandey might play this match for Madhya Pradesh and Tamil Nadu also might rest a few of their top players having qualified for the knockouts. Wait for the toss and playing XIs to come before finalising your team.

Tamil Nadu are expected to extend their winning streak.