Why Sachin Tendulkar is the greatest batsman in World Cup history

Why Sachin Tendulkar is the greatest batsman in World Cup history

The question is, how did Tendulkar fare when the occasion became grand, and the pressure increased? 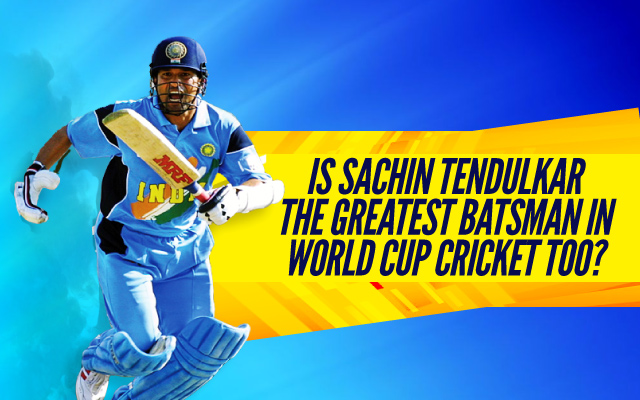 For over three decades, Sachin Tendulkar’s career has been dissected by the cricketing world. Armchair experts have analyzed his place in history, fans have had their say, and former teammates and players have their opinions to make as well.

Even after 7 years into his retired life, Tendulkar continues to remain in the discussion. And, that is due to the gargantuan numbers that he generated throughout his unprecedented career. Tendulkar holds virtually every single batting record in ODI cricket, including that for the most runs (18426), most hundreds (49), and the most fifties (96), among many others.

Now the question is, how did Tendulkar fare when the occasion became grand, and the pressure increased?

Is Tendulkar the greatest batsman in World Cup cricket too? 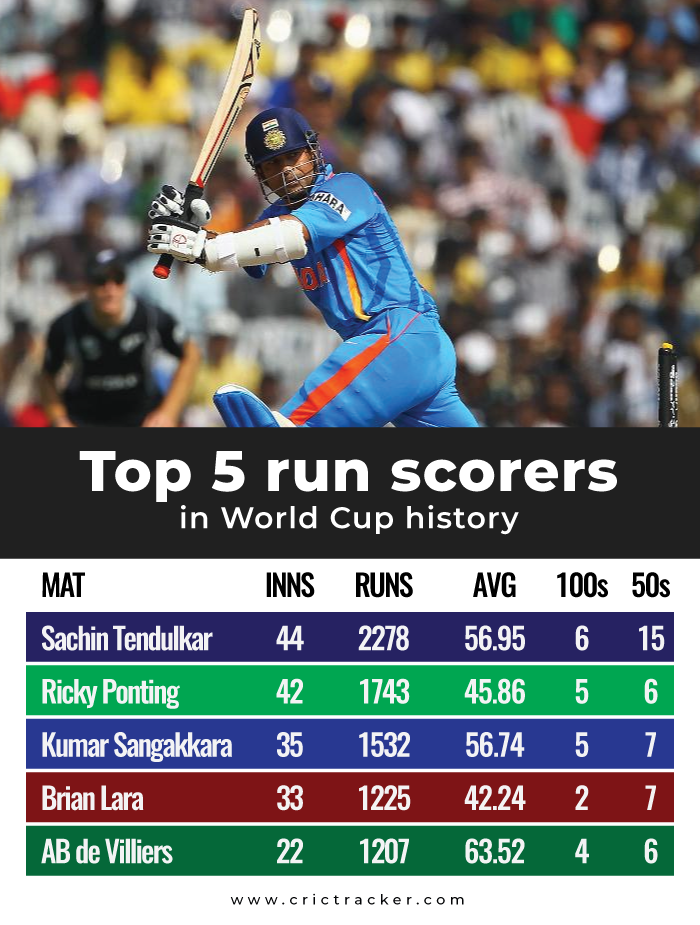 As we can see, Tendulkar is the only batsman to have scored over 2000 World Cup runs, and also holds the record for the most number of hundreds (6) and fifties (15) in World Cups. In fact, as far as fifty-plus scores are concerned, the second man on the list (Kumar Sangakkara) barely has a little more than half the 50 plus scores that Tendulkar has.

Yes, it may be argued that AB de Villiers has a better average than Tendulkar, but the fact that Tendulkar managed to have such a high average playing double the amount of innings that De Villiers did tilts the scale in his favor.

There has not been any batsman who has been under as much pressure and scrutiny in the history of the game like Tendulkar has been. Over a period of a career that spanned a quarter of a century, Tendulkar was the divinity of the Indian batting line up and carried the burden of his nation on his shoulders.

And, it would not be an exaggeration to say that India owe their semi-final finish in the 1996 World Cup largely to Tendulkar. The master was in stunning form throughout the tournament and scored 523 runs at an average of 87.17.

Tendulkar also scored 2 hundreds and 3 fifties in the 7 innings that he played in the tournament and was in the form of his life. But then, even though Tendulkar scored 65 in the semi-final against Sri Lanka, the rest of the batsmen did not offer any resistance on that fateful day and India bowed out of the tournament.

In the 2003 World Cup, Tendulkar was again at the forefront. The master aggregated 673 runs throughout the tournament, a tally that has not been beaten till today. His knock of 98 against arch-rivals Pakistan in that tournament is considered as one of the greatest played by a batsman in World Cup history. But even then, the Aussies steamrolled India in the summit clash.

In the year 2011, Tendulkar defied Father Time and appeared in his 6th World Cup, a record that has been matched only by Javed Miandad. And, in his final appearance too, Tendulkar was at his riveting best. He scored hundreds against England and South Africa and his crucial 85 against Pakistan allowed India to make the final of the multi-nation tournament. He finished the tournament as the second-highest run-scorer in the competition aggregating 482 runs.

And, on the night of 2nd April 2011, Tendulkar finally fulfilled his long-cherished dream of lifting the World Cup trophy.

Why Tendulkar outshines all the others?

Sachin Tendulkar is the only batsman in history to have aggregated over 450 runs in three separate World Cup events. In fact, even if we take his aggregates only in 1996,2003, and 2011 World Cups alone, he will still stand second in the list of batsmen with most runs. From the age of 19 when he appeared in his first World Cup till the age of 38 when he played his last, Tendulkar morphed and changed with time.

His ability to adapt and change with time makes him the greatest batsman in World Cup history. He leads his nearest competitor in terms of runs scored by 535 runs, and none of the current batsmen are even within touching distance of his aggregate in World Cups.

With such impressive numbers across six World Cups, and his ability to raise his game when the stage became grander, Tendulkar can rightfully stake claim to be the greatest batsman in World Cup history.

And, the numbers that he generated stand testimony to the same.