Zak Crawley - England's new savior at No. 3 in Tests

Zak Crawley – England’s new savior at No. 3 in Tests

Since Jan 2017, England have tried as many as 12 batsmen at number three. None lasted a substantial amount of time.

This should be it. The 267 by Zak Crawley, spanning over almost a day and a half at Southampton, should be enough to keep him at number three for a little more time than his recent predecessors. Stats can often be misleading. Anyone who watched him bat for his humongous total will be hard to convince that he started this innings with a mediocre average of 28.57 in 11 Test innings and just 30.82 in 74 First Class innings. Mind you, the numbers have improved significantly.

The most intriguing part, however, is that these runs came at number three, a position which England doesn’t have very cordial relations with for a while now. Since Jan 2017, they have tried as many as 12 batsmen at number three. None lasted a substantial amount of time.

England’s misery at number three is such that before this innings, their last century at this position came in November 2018 when Jonny Bairstow hit one in Sri Lanka. The one before that came in 2016 at Lord’s against Pakistan. 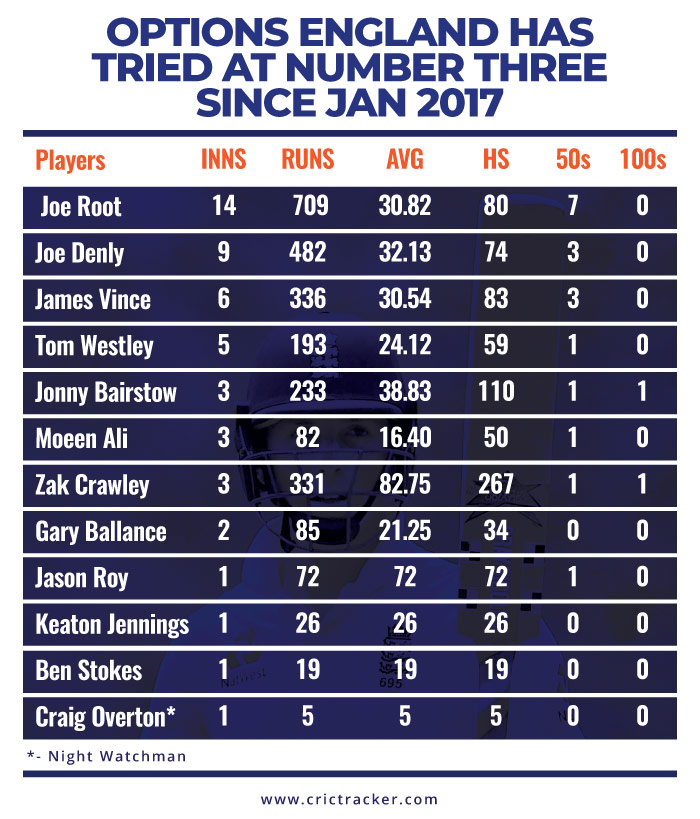 Out of the six Test matches England has played this summer, the 22-year-old Crawley played four, two each against West Indies and Pakistan. The departure of Ben Stokes to New Zealand for personal reasons came as a blessing in disguise for Crawley who warmed the bench in the first Test at Old Trafford. Coming into the final match at Southampton, he fine-tuned his batting in the rain-washed second Test match with 53 off 99 balls.

After losing the toss and being put to bowl, the visitors found happiness early when Shaheen Shah Afridi sent back Rory Burns with a jaffa. Oh, if only they knew. In came Zak Crawley in the fifth over. He wasn’t going back without playing 393 balls, until the 133rd over.

It was an easy start for Crawley, Shaheen offering him a dolly on the leg side and him sending into the square leg boundary to set the ball rolling. The Pakistani bowlers were relentless in their lines and lengths thereinafter and yet Crawley was able to find gaps regularly. At 49, he shunned out 16 deliveries before reaching 50 right at the stroke of lunch.

Continuing with the same rhythm after the break, Crawley reached his century in just 171 balls, thus becoming the fifth-youngest England player to reach the milestone. It was batting at its affluent best. Crawley is no average player. It shows in his selection in the Test Side after just two seasons in the county championship. It also showed in the way he handled the accuracy of Abbas, the variation of Shaheen, the pace of Naseem, and the spin of Yasir.

Statistics show that batsmen who play Abbas from outside the crease a meter or so tend to have fewer problems and more success against him. Zak Crawley did just that. Using Pakistan Captain Azhar Ali’s fault in bringing wicketkeeper Rizwan up to the stumps, he settled on the crease and took the game to Pakistan with his attacking batsmanship.

Once past the magical figures, the confidence increased and so did the run rate. The next hundred took just 160 balls and the final 67 just 62 balls. By the time his innings came to a halt, he had spent 593 minutes and with the aid of Buttler’s century put England in a position they couldn’t lose from. 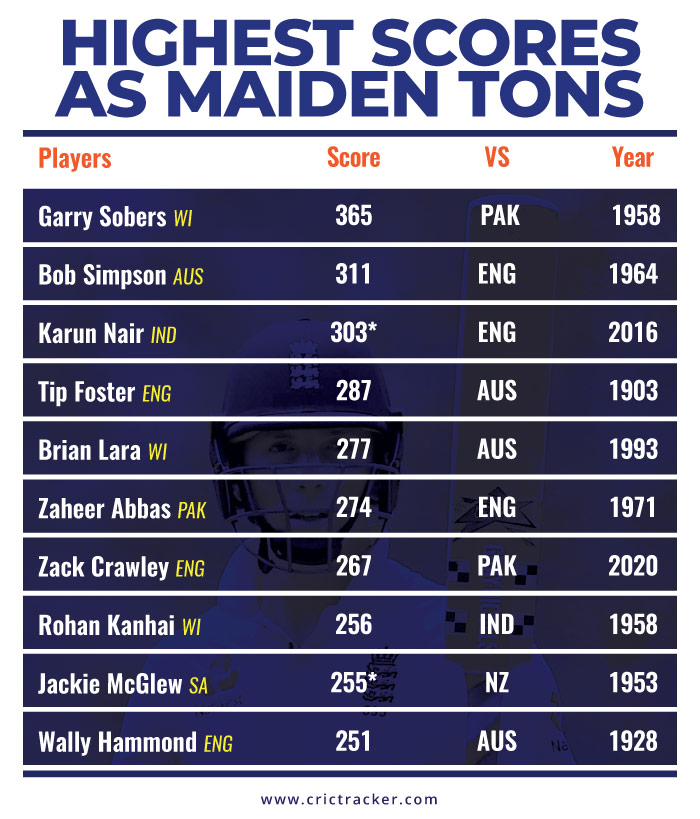 End of Journey for Joe Denly?

Teammates with Crawley at Kent, Joe Denly was the last batsman tried at this position. Since his debut in January 2019, he has 15 innings to get 482 runs at 32.13. In the 28 innings he has batted in Tests, he has crossed the 100-ball mark (nicknamed after him as Den-tury) in 9 of those. In the same time frame, only Marnus Labuschagne has crossed the barrier more times than him (10).

Contrastingly, Denly averages just 29.53 while the Aussie goes at 74.05. With no big score to show, Denly’s position was always precarious. It was only a matter of time before this happened.

Time is the most important commodity in the longest format of the game, be it on or off the field. Joe Denly, at 34, has precious little of it. When he was left out of the team after the first game of the summer against the West Indies, it was thought that he has reached the end of the rope. And with every run Crawley makes, hopes of a Denly comeback slowly diminishes.