Both these sides lost their opening encounter in this season's IPL.

The Delhi Daredevils and the Rajasthan Royals, as all the other teams, would have come into IPL 11 aiming a good start, but they couldn’t quite get that in their respective season openers as they ended up losing by comprehensive margins to get pushed down the table. However, both of them will want to shrug it off as they come across each other in Jaipur on Wednesday evening.

As this will be the first home game for Rajasthan in more than two years, the atmosphere should be electric at the Sawai Mansingh Stadium and the fans who turn up will expect a top-notch performance from some of the reputed international names in the Rajasthan squad. Delhi, on the contrary, will look to dominate the game and spoil the party of the hosts.

The Sawai Mansingh Stadium over the past seasons of IPL has been a sporting pitch which has something in it for everyone. The surface at this venue generally has had a little bit of spice and the ball has nipped around in the initial few overs of both the innings. There has been good carry as well. But it, by no means, has been a totally bowling friendly surface.

Good carry in the surface means the players who like the ball coming onto the bat at pace will enjoy hitting it on the up, however since the surface remains a little spicy with a bit of green tinge, it will be important for the batters to give themselves a couple of overs or so before starting to go for the extravagant hits.

Dew will be a big factor in Jaipur without a shadow of doubt and a bat-first decision by a captain at the toss is out of the equation. As has been the norm this tourney, whoever is lucky with the coin will opt to bat second so that his team can have slightly better batting conditions under dew.

Dropping Tripathi after just one game will be harsh, but Rajasthan will perhaps have to make that call as he is a top order bat and they don’t have any room up top with Ajinkya Rahane, D’Arcy Short and Sanju Samson already there in top 3.

Tripathi will be replaced by Klaasen who is a better-equipped player in the middle order as he has got the power game. Klaasen’s inclusion in the XI means one of the four overseas players of the last game will have to leave his place and it will be Ben Laughlin who looked very, very ordinary against the Sunrisers.

The vacancy created by Laughlin’s removal will be filled by Stuart Binny who will bat at no. 7 and will also be a part-time bowling option for the skipper Ajinkya Rahane.

Glenn Maxwell was not available for selection against the Kings XI Punjab as he was attending the marriage ceremony of his friend Aaron Finch. He has, however, reached in time for the second game and should be picked straightaway. The 29-year old brings tremendous value to any T20 side in the world with his all-round abilities and his selection will be a no-brainer. His compatriot Daniel Christian will have to sit out to make space for him in the XI.

Gautam Gambhir overlooking Shahbaz Nadeem for the wrist spin duo of Rahul Tewatia and Amit Mishra in the first game raised many eyebrows and rightly so. Nadeem based on his past performances for Delhi and his recent form in the domestic circuit should have been an automatic choice.

The move of picking two wrist spinners didn’t work as Mishra and Tewatia gave away 70 runs in their 8 overs together, picking just 1 wicket. Mishra, in particular, was completely off colour and was taken apart by KL Rahul. The veteran is likely to have to face the ax for Nadeem.

Rajasthan Royals’ batting will be absolutely lethal, to say the least, if Klaasen joins the likes of Short, Stokes, and Buttler. If two out of these four are in touch, they will make big enough contribution for Rajasthan on their own. Delhi is also just about neck and neck with Rajasthan as far as the power-batting is concerned as they also have the likes of Colin Munro and Rishabh Pant who are destructive hitters of the cricket ball.

Rajasthan, however, lags far behind Delhi in terms of bowling resources as they don’t have a real strike force with the ball. They have defensive bowling options all through their attack, unlike Delhi who has got a couple of enforcers in Trent Boult and Chris Morris.

The prediction is for the Delhi Daredevils to beat the Rajasthan Royals in this match. 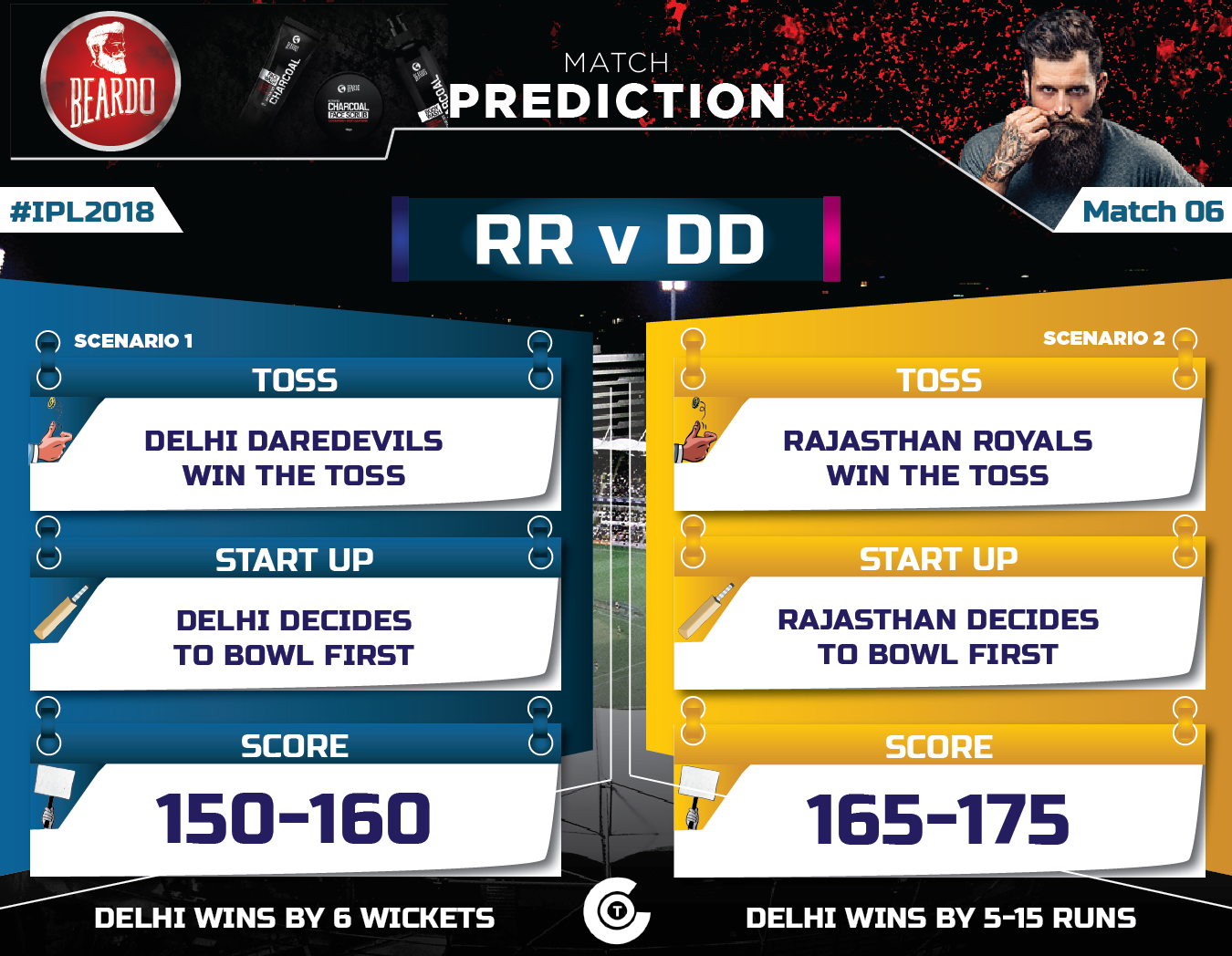