The Zalmi are on a three-match winning streak and are the current table-toppers.

Karachi Kings have looked excellent in patches, but an inconsistent run means that they have lost two out of their four games in the 2021 Pakistan Super League (PSL). In their previous game, Imad Wasim and Co went down to the Lahore Qalandars by six wickets. Another loss could put them in a bit of strife. Their next match is against the Peshawar Zalmi on Wednesday at the National Stadium.

The Zalmi, on the other hand, are on a bit of a role in the tournament. After going down to the Qalandars in their opening game, Wahab Riaz and Co have won three games on the trot and are placed atop the points table. In two of their three wins, they chased down targets in excess of 190 and must be brimming with confidence. The Zalmi will look to carry on with their winning streak.

The pitch in Karachi has been an absolute belter for batting thus far. Scores of even over 190 haven’t looked safe by any means. The track has also helped the team, batting second to a significant extent. The temperature will be around the 26 degrees Celsius mark with the humidity mostly in the 10s.

Playing Combinations for KAR vs PES

Sharjeel Khan, without a doubt, has been the standout batsman for the Kings in the tournament. In four matches, the left-hander has notched 200 runs at an average and strike-rate of 50 and 172.41 respectively. With a century and a half-century under his belt, Khan has the ability to do a lot of damage.

The pitch in Karachi hasn’t had much for the batters to cheer for. But that hasn’t deterred Saqib Mahmood from picking up wickets at crucial stages. In four matches, the right-arm pacer has picked up 10 wickets at an economy rate of 7.34. The Zalmi will again be looking up to the fast bowler.

KAR vs PES Head to Head

The prediction is for Karachi Kings to win the match. 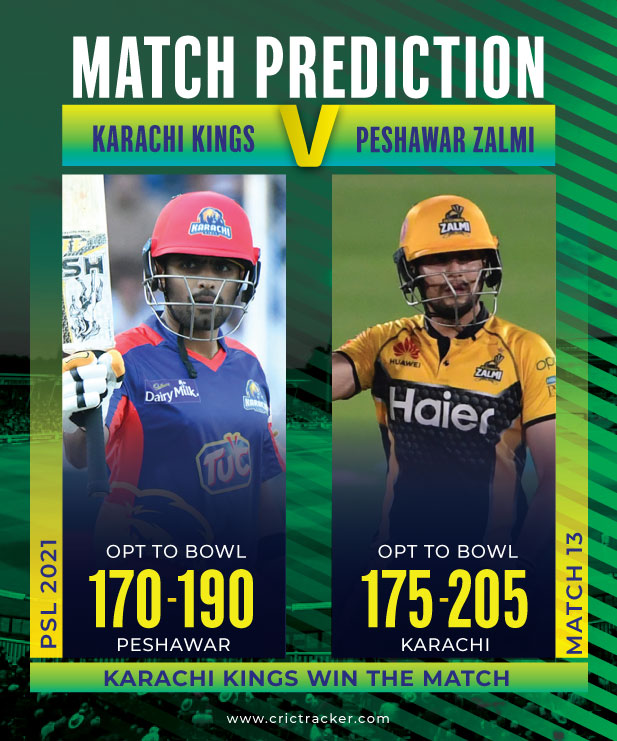